The Rev. Michael Funkhouser had told his church folks about the big honor he had received. And he’d told them he was counting on them to keep him humble.

Two weeks later, Funkhouser stood in the pulpit on a Sunday morning and noticed everyone in the pews wore a jacket.

Since this was October in West Virginia, he didn’t think much of it.

That changed when his parishioners rose as one and doffed their coats. They all wore T-shirts saying, “Our Country Parson is West Virginia Teacher of the Year!” They turned around — again on cue — to show Funkhouser his face on their backs.

“Guys,” he recalls telling them, “that’s not going to help with my humility.”

Funkhouser was indeed the 2013 West Virginia Teacher of the Year, which took him to the White House, and provided other trips for him and his wife, Ann.

But he continued to lead three rural United Methodist churches. The bivocational pastor’s life is a scramble, but Funkhouser believes it has stretched him in good ways.

He combined old-fashioned pedagogy — requiring sentence diagramming and assigning Dickens and Shakespeare — with innovation, such as having students study how music advances the plot in the film “O Brother, Where Art Thou?”

He made extra money coaching, and started the girls’ volleyball program. Funkhouser knew little about the sport. When, before the first match, his girls asked how to warm up, he remembers saying, “Go shoot hoops until the other team comes out. Then do what they do.”

More than a few of Funkhouser’s students would go on to become colleague teachers in Wardensville. Kathy Strawderman is one, and attends one of his churches, Shiloh United Methodist.

“He’s a minister, but he’s more of a friend,” she said. “I’ve been around him for so long. He was a coach to me. He was a teacher to me. And he’s definitely a role model.”

Funkhouser was singing in the Wardensville United Methodist Church choir in 2003 when the pastor mentioned a training event for certified lay speakers.

“I went home and told my wife ‘I know I don’t have time to do this, but I think I’m supposed to,’” he recalled.

Funkhouser went on to local pastor licensing school, and in 2005, he was appointed to lead the Shiloh, Willow Chapel and Bethel United Methodist churches part time. 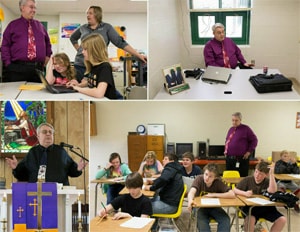 The Rev. Michael Funkhouser leads three churches in rural West Virginia with the help of his wife, Ann.

By then, one of his and Ann’s children had gone off to college, and the other was about to go.

“We kind of cleared that part of the nest out and filled it up with our churches,” Funkhouser said.

“My wife’s not afraid to let me know if a sermon is not working,” Funkhouser said.

Ann — a retired music teacher — is his ministry partner, playing the piano as needed, and joining him in visiting the sick. She helped form a “charge choir” among the three churches.

When it comes to baptisms in the Capon River, though, Funkhouser turns to Buddy Stickman, a former Baptist in his flock.

“He makes sure I don’t lose anyone,” Funkhouser said.

In Funkhouser’s years, the churches have grown. He gives all credit to the members. He speaks with emotion of how supportive they were when he had to be away as Teacher of the Year.

But church members say it is the Funkhousers who have demonstrated great faithfulness.

One example of that care is in neckties. Funkhouser owns about 150, and while many feature Bible verses, others have emblems that recognize the occupations or hobbies of church members. It might be a tractor for a farmer or a favored flower for a gardener.

When the time comes to preach a funeral, Funkhouser tries not only to personalize the message, but also to wear a tie that honors the deceased.

This June, after 34 years in public education, Funkhouser officially retired. Then he signed on as a substitute teacher.

As for ministry, he plans to step up the pace.

“My first priority is going to be these three little churches who have been so patient with me,” Funkhouser said. “They get the first bite of the apple.”