Sid Davis never thought he’d be driving all over his sprawling city to have masked, socially distanced curbside visits with choir members.

But Davis, director of music and worship arts at Houston’s St. Luke’s United Methodist Church, has faced an empty choir loft and no in-person rehearsals since early March.

So he and wife Cindy are going ZIP code by ZIP code to check on more than 100 adult choir members. The couple even have a magnetic “Operation Curbside Convos” sign on their Mazda. 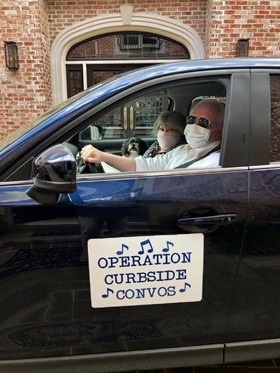 Sid Davis, director of music and fine arts at St. Luke’s United Methodist Church in Houston, and his wife, Cindy, spend time these days driving around visiting choir members. Davis and other music ministers say the pastoral part of their job has increased since the COVID-19 pandemic, which has choirs largely sidelined. Photo courtesy of Sid Davis.

“A lot of my work right now is all about people,” said Davis, in his 25th year at St. Luke’s. “If we want to make music again in person, we better have done our homework in keeping the community alive while we can’t gather.”

Music ministers are all too familiar with research suggesting that singing ranks with coughing as a coronavirus spreader. The Skagit Valley Chorale in Washington state experienced dozens of infections, three hospitalizations and two deaths after a March 10 rehearsal attended by an unsuspecting COVID-19 carrier.

Scientists called it a superspreader event, and the choral community shuddered.

“None of us thought the thing we love to do would become a lethal activity,” said the Rev. Leigh Anne Taylor, president of the Fellowship of United Methodists in Music and Worship Arts.

Some United Methodist conferences that are cautiously letting churches reopen still have a stop sign up for congregational and choir singing. So does an ecumenical guide to church reopening, pulled together by United Methodists. California has instructed all places of worship not to have singing in person.

While fully supportive of safety restrictions, music ministers are candid about how painful it has been not to gather for weekly rehearsal and for worship.

“It’s a desolate desert,” said Richard Collinsworth, a tenor in the Martha Bowman Memorial United Methodist Church choir in Macon, Georgia. “Our choir is very much like a family.” 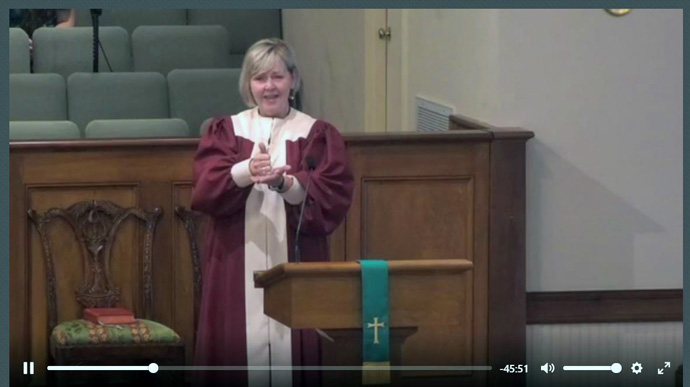 Ellen Hanson, director of traditional music worship at Martha Bowman United Methodist Church in Macon, Ga., does an American Sign Language version of the “Gloria Patri” during a June 24 worship service. Hanson has found ways to keep the congregation and her choir engaged while singing is not allowed due to the COVID-19 pandemic. To watch video, click here. Scroll down for the June 24 Traditional service; scroll in the video 13 minutes for the "Gloria Patri." Video image courtesy of Martha Bowman United Methodist Church.

But some music ministers have gone beyond this, creating virtual choir videos — audio-visual mosaics of members singing from home.

That these are labors of love is clear from a summary explanation offered by James Wardlaw-Bailey, who leads the choir program at St. John United Methodist Church in Anchorage, Alaska.

“My wife (Freya Wardlaw-Bailey) records the piano part, and I sing and record all the choir parts,” he said. “I link all those up together and make listening tracks for the choir — sopranos, altos, tenors, basses. They get all the parts, but if you are, say, a bass, then the bass part is more prominent. The choir members all record themselves. They send those back to me and I do my magic.” 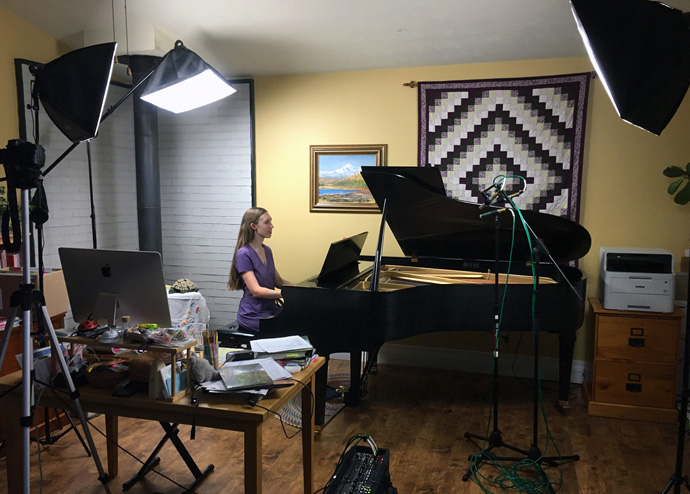 Wardlaw-Bailey — who loves technology and has worked up an instruction sheet for making virtual choir videos — uses various software programs to edit the audio and video into a pleasing whole that can be part of the church’s recorded worship and posted online.

“I’ve gotten a lot faster — maybe three or four hours (of editing) for an anthem,” he said.

St. John is a United Methodist leader in virtual choir performances, having done a handful since the pandemic. So is A&M United Methodist Church in College Station, Texas, where music minister Michael Vaughn has done them with adult, children’s and handbell choirs.

Calvary Korean United Methodist Church in East Brunswick, New Jersey, has been pulling together a virtual choir video nearly every other week. That’s been important to a church full of people who, because of COVID-19, have had to shutter their small businesses.

“They’ve had financial hardship and are down, as you might imagine. We try to give them hope and glorify God,” said choir member Jin Soo Shin. 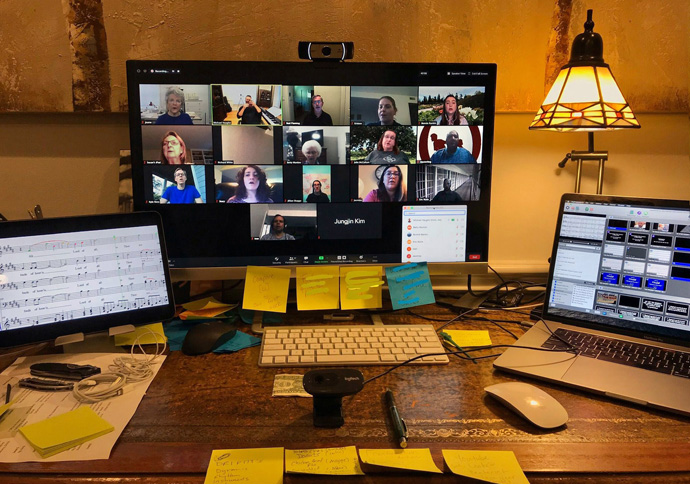 In Albuquerque, New Mexico, St. John’s United Methodist Church did a virtual choir video of “Creation of Peace,” by Mark Miller, a United Methodist composer. Mathew Greer, the church’s music minister, said he couldn’t have done it without the technical expertise of staff members Jim Ahrend and Shea Perry. (Perry can be seen as a soloist in the video, holding her cat.)

But Greer himself has found other innovations to keep music going, including hiring out-of-work local musicians to record solos for online worship.

“We got maybe 45 of those videos in the can before the lockdown,” said Greer, who has helped administer a relief fund for New Mexico musicians.

At Martha Bowman Memorial United Methodist Church, in-person worship has resumed but without choir or congregational singing. So Ellen Hanson, director of traditional worship music, learned the “Gloria Patria” in American Sign Language and has been teaching it to the church.

Davis, the Houston music minister, had a few members of the St. Luke’s United Methodist choir join him in a parking garage  where they spread out and sang the medieval hymn “Adoro te devote” (“Humbly I adore Thee, Verity unseen”).

A homemade video of the performance, complete with Davis’ dog running around, has drawn a couple of thousand Facebook views.

“It worked beautifully,” Davis said, but added that the next day coronavirus numbers in Houston began to rise again. 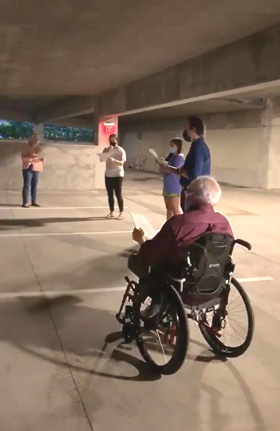 Music ministers all say the pandemic has bumped up the pastoral part of their job.

When his choir could no longer gather, Dakota Hill, director of music and worship at First United Methodist Church in Dyersburg, Tennessee, began to text each member weekly, asking how he could best pray for them.

“I had the thought one day and did it, and I had five or six people who said, `I really needed this,’” Hill said. “It was an amazing way for the Holy Spirit to move.”

At Manchester United Methodist Church, in Manchester, Missouri, Thursday night has always been what director of music and worship Kevin McBeth calls “sacred time” for choir rehearsal. But now it’s when members gather via Facebook for Choir Time with Kevin.

McBeth, in his 25th year at Manchester, checks in on members. He’s even sung to them. And he’s welcomed composer friends, such as Mark Hayes and Joseph Martin, into the meetings.

McBeth’s chancel choir has 145 members and he’s had the different sections meeting on their own virtually, every other week.

“The altos have the best attendance,” he said. “Go figure what that means, but it’s been wonderful.”

Lots of choirs are having video conference hangouts during their usual rehearsal time, including East End United Methodist Church in Nashville, Tennessee.

That church’s sanctuary was destroyed by a March 3 tornado, then came the pandemic. Joe Lee, music director, has had the choir gathering Sunday nights online, and at the July 12 meeting Carl Zehner was finally able to be with them.

Zehner, 74, contracted COVID-19 while on a cruise in March and spent more than two months in the hospital, including three weeks on a ventilator.

Having a remote reunion with fellow choir members was a big deal.

“A lot of warm fuzzies,” Zehner said. “It was so nice to see everybody again.” 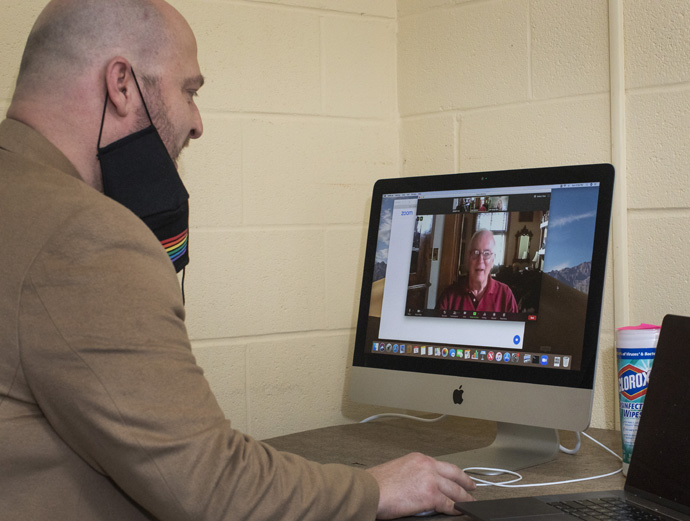 If getting back to a pre-pandemic normal seems a long way off for churches, it’s even farther for music ministers and choirs. Not only is singing hazardous, but choir members tend to be older and more at-risk with the disease.

“My personal opinion — and I get choked up talking about this stuff — is it’s going to take a vaccine,” said Greer.

But he and music minister colleagues say they’ve been acquiring pastoral and technological skills that will serve them for the long haul.

For sure, they’ve learned adaptation and perseverance.

“I think everybody spent the first few weeks kind of in shock, trying to figure out, `What do we now?’” Davis said. “About a month in, I said, `I think it’s time we stop bailing and start raising the sails.’” 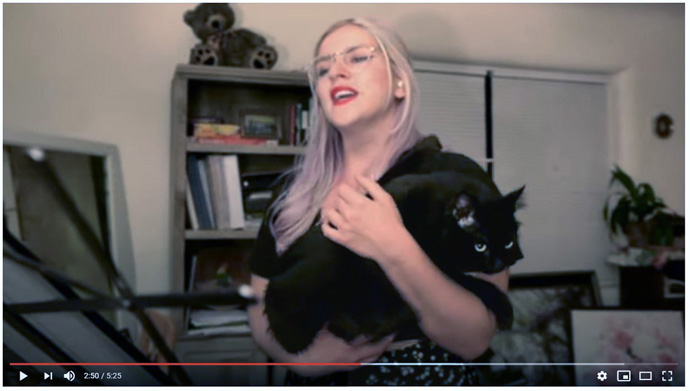 Shea Perry, choir member of St. John’s United Methodist Church in Albuquerque, New Mexico, has feline company as she performs a solo for a virtual choral performance of “Creation of Peace” by Mark Miller. (Full performance is embedded above.) YouTube screengrab by UM News.

The board of The United Methodist Church’s finance agency has approved a monthly stipend for active bishops who serve more than one episcopal area in this time of disruption.
Faith Stories

UM News photographer Mike DuBose shares images from around the world to remind us that fathers from all walks of life have dreams for their children and deserve to be celebrated.
Worship