Consider each migrant who crosses your path as if they are Jesus Christ, six bishops of the Methodist Church of Mexico said in a statement urging better treatment of refugees.

“We are a church that empathizes with the suffering of men, women, youth, children and entire families who find themselves having to confront borders and criminal elements in order to find opportunities for a better life,” said the statement, released Nov. 1 by the United Methodist Immigration Task Force.

The Methodist Church of Mexico has been autonomous since 1930 and became a concordant church with The United Methodist Church in 1975. The church has six episcopal areas with about 150,000 members.

Migration is up 49 percent worldwide since 2000, reports The Associated Press. There were more than 258 million people living in a country other than their birth country in 2017, according to the United Nations. A tally by the AP documented at least 56,800 migrants dead or missing since 2014.

“We believe in Jesus Christ, who had to cross borders to flee violence, just as tens of thousands do across our Latin American lands escaping poverty, crime and other situations that force them to live under precarious circumstances,” the bishops said in the statement. “We join the suffering people of Latin America as migrants and pilgrims with them.”

The Methodist Church’s very identity is that of a migrant, the bishops said.

“Our faith and tradition traveled from Palestine to England, crossing borders and languages over the centuries, from there arriving in Mexico through migrants from England and the United States,” said the statement. “Our congregations are the fruit of the many journeys and exchanges of people who escaping violence, poverty and marginalization have sought better life opportunities in other communities.” 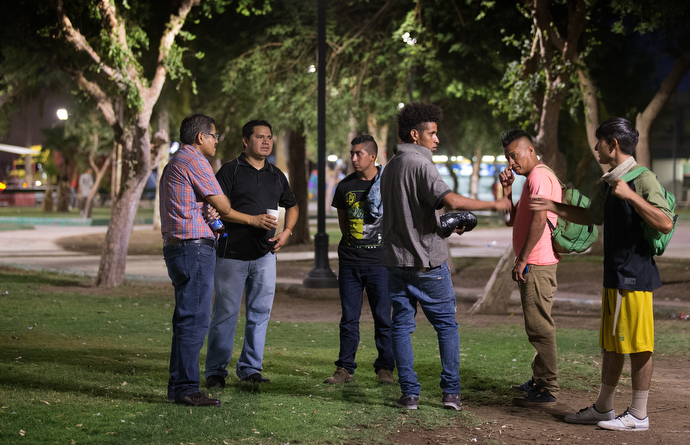 Bishop Felipe Ruiz Aguilar of the Methodist Church of Mexico (left) visits with migrants who have recently arrived from Honduras at Mariachi Plaza in Mexicali, Mexico, in August 2018. File photo by Mike DuBose, UMNS.
A caravan of migrants mostly from Honduras, El Salvador and Guatemala has been slowly working its way through Central America to the Mexican-U.S. border. The caravan was a national campaign issue in the midterm elections, with President Trump claiming many of the travelers are hardened criminals, perhaps members of the MS-13 gang. The AP Fact Check disputes those claims.

The bishops exhorted citizens and civil authorities to treat migrants who cross Mexico with the hope of entering the U.S. with dignity, and reminded church officials and laypeople to be “instruments of peace.”

“Let us remove from our lips any words that discriminate against and violate the migrant,” the statement said. “In summary, let us be water and manna in the desert for the people who migrate.”