When the Minneapolis congregation was considering the Rev. Kristin Sundt as pastor, some members had misgivings.

It wasn’t so much that she was a woman (although she would be their first female pastor) or that she might falter when conducting services in Norwegian (it’s her mother tongue). Rather, the uncertainty was because the new pastor of the Norwegian Lutheran Memorial Church was a United Methodist.

Now, with Sundt preparing to leave the congregation she has led faithfully for nearly eight years, Lutherans and United Methodists alike are praising the unusual collaboration as one that strengthened an old and historic congregation, made connections in the Nordic American community and demonstrated the power of ecumenism.

“She’s been very steadfast, and one step ahead all the time,” said Terry Parker Madson, a 20-plus-years member of the church known best by its Norwegian name of Mindekirken.

Another longtime member echoed that praise. 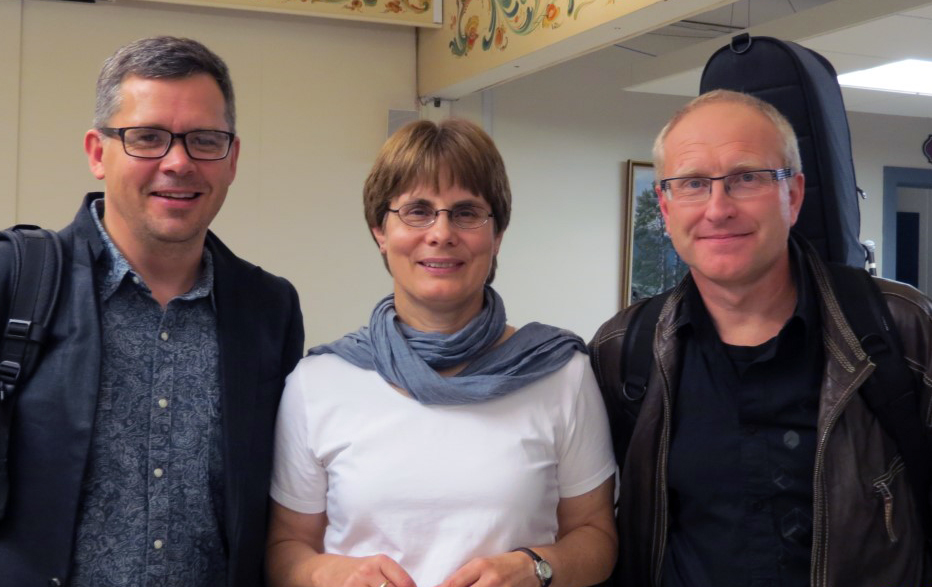 The Rev. Kristin Sundt poses with two Norwegian performers in Fellowship Hall at Mindekirken, the Norwegian Lutheran Memorial Church in Minneapolis. Sundt is a Norwegian United Methodist elder who is now pastor of the Lutheran congregation. Photo courtesy of Kristin Sundt.

But how exactly does a Norwegian United Methodist elder end up pastoring a Lutheran congregation in Minneapolis?

“For me, it was kind of a homecoming,” said Sundt, who was baptized and confirmed Lutheran because that was the official religion of Norway. As an adult, she joined The United Methodist Church in Norway, attended seminary and was commissioned an elder in the Norway Conference. She served two churches in Norway in the early 1980s.

She also married a Presbyterian Church (U.S.A) minister, the Rev. J. David Espey, who was pastor at an English-speaking church. In 1986, the couple came to the United States, where Sundt served a variety of special appointments over the years:  a two-point charge in Wisconsin, pastor of some PCUSA congregations and a director of Christian education.

When Espey died in 2002, the couple’s two daughters were young, and so Sundt – a legal resident alien in the U.S. – decided to stay. In 2009, she saw an advertisement seeking a pastor for Mindekirken.

The congregation started in 1922 as part of the Norwegian Lutheran Church in America, to help preserve Norwegian language and culture, “for as long as anyone would hear and understand it,” according to a church history.

Today it is one of only two churches in North America that still offer worship services in Norwegian; the other is in Chicago. Both are now affiliated with the Evangelical Lutheran Church of America.

When it comes time for a new pastor, Mindekirken’s special requirements exempt it from the ELCA’s usual call system. Speaking Norwegian fluently, being intimately familiar with Norwegian culture, and being up-to-date on the political and social climate in Norway today are essential, so previous pastors have mostly all come directly from Norway.

That’s another way Sundt’s candidacy shattered traditions at Mindekirken. Her permanent residency meant she did not need to seek permission to work in the U.S. and did not face a time limit on her service as other pastors had.

United Methodist Bishop Christian Alsted, leader of the Nordic and Baltic Episcopal Area, said the ELCA and The United Methodist Church sharing communion rights made the alliance possible. He called it “a shining expression of the value of strong ecumenical relationships.”

He said Sundt was ”an excellent ambassador of the best in Methodism in a Lutheran context.”

Dakotas-Minnesota Area Bishop Bruce Ough, president of the United Methodist Council of Bishops, said most conferences in the U.S. see some cross-denominational appointments, particularly in rural areas, but Sundt’s pastorship in a large city is, “a great way to demonstrate not only our connectional vibrancy, but also to demonstrate our commitment to ecumenism.”

Much of the Lutheran liturgy was familiar to Sundt, although she said she did have to learn the English words for some of the old hymns so she could sing along during the small weekly English service.

Madson said at first, Sundt did not follow the Norwegian Lutheran custom of singing the liturgy but, realizing that was important to the members, she began taking voice lessons so she could sing with confidence.

Mindekirken has 220 full and associate members, but “we have a bigger ministry than our congregation,” Sundt said.

The congregation draws 600 to 900 people for its annual constitution day celebration and hosts a Leif Erickson International Festival each October. The church has strengthen connections with the American Sami population – the indigenous people of the Nordic countries — and often hosts important guests from Norway.

Mindekirken offers classes in Norwegian language and culture, a Tuesday lunch and cultural program, and a “kirkekaffe,” or church coffee, after the Norwegian service each week.

“They have a great love for the church here,” Sundt said. “It’s been a very inspiring and interesting place to be.”

But, she added, “I had always said I would go home at some point.”

Her last Sunday at Mindekirkken is May 21, then she will return to Norway, her extended family and new ministries opportunities.