Four clergy candidates who came out as gay in an open letter to The United Methodist Church before the 2016 General Conference were among 28 people approved for ministry by the New York Conference. 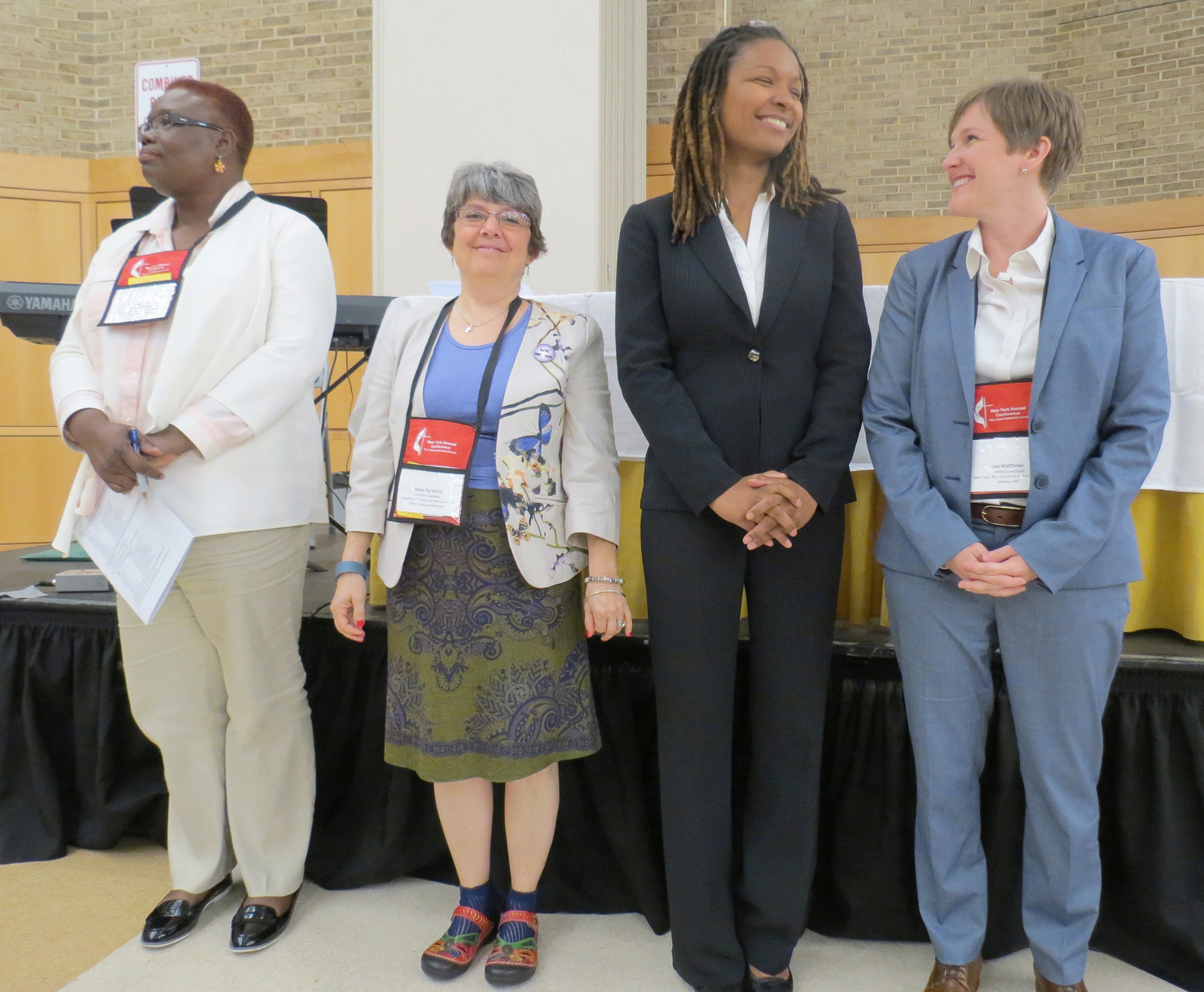 Elyse Ambrose, second from right, and Lea Matthews, far right, were among group approved as provisional deacons by the New York Conference. Photo by Joanne Utley

Elyse Ambrose, Bruce Lamb and Lea Matthews were approved for commissioning and Alex da Silva Souto was approved for ordination.

A clergy member raised questions about the legality of ordaining or commissioning of this group of pastors, and Bishop Jane Allen Middleton said on June 10 that it would be improper for her as bishop to make any substantitve decisions of law on the questions.

Mathews said it was difficult waiting to hear about the vote.

“But when Bill Pfohl (chair of the board of ordained ministry) threw back the door with a huge smile on his face and gave me a thumbs-up, I felt the tears come. My heart nearly burst from the joy of that moment. I could accept the call from God and the commission of my church as me, all of me. A gift divine!” she wrote in an email to United Methodist News Service.

Lamb expressed his gratitude to the conference for “being a river of life and love for all God’s children where all truly means all.

“This is an historic first and I pray that it is truly the first of many for other annual conferences,” he said.

Da Silva Souto said being allowed to serve was “an amazing privilege.”

“Many have fought to allow me to dream of serving. The dream has come true for me, I can finally do this as a whole person, not as a fractured, frighten and terrified pastor.

The New York Conference’s board of ordained ministry announced March 1 that it would not consider sexual orientation in evaluating a clergy candidate, even if that individual has a spouse of the same gender.

“I count myself fortunate to be in the New York Conference,” Ambrose said. She said she has heard stories from LGBTQ people across the connection and their experience has not been as supportive, she said. The initials stand for lesbian, gay, bisexual, transgender and queer or questioning.

The Baltimore-Washington Conference’s board of ordained ministry announced it was recommending a married lesbian, Tara “T.C.” Morrow, as a provisional deacon at about the same time. However, during the meeting of the Baltimore-Washington Conference clergy members did not approve her for commissioning. A commissioned candidate begins provisional clergy membership in the conference, serving an appointment to gain experience in ministry.

Questions for the bishop

The Rev. Steven Knutsen, who serves the Seaford United Methodist Church on Long Island, raised questions twice about the action taken to affirm the four candidates during the first session of the annual meeting.

He asked if the board of ordained ministry had sufficiently examined the candidates about celibacy in singleness and faithfulness in marriage.

Pfohl said the guidelines of the Book of Discipline were followed.

“We are excited to have them serve us, and with us, as clergy,” Pfohl said.

After the votes approving the candidates, Knutsen presented Bishop Middleton with four questions of law concerning the legality of ordaining and/or commissioning this group of pastors.

Late June 10, Middleton announced that a substantive ruling on those questions would be improper.

"The proceedings and procedures of the Conference Board of Ordained Ministry are not subject to review by the powers and authorities granted to Bishops by our church’s Constitution," she said in a statement.

She added that her written response to the request for a decision of law will be issued and published on the New York Conference website.

My actual written response to this request for a Decision of Law will be issued and placed on the New York Annual Conference website within the 30-day response period allowed by the Book of Discipline. Any bishops' response to a question of law is subject to the review of the Judicial Council, the denomination's top court, which will next convene in October.

The service of ordination/commissioning is scheduled for 10 a.m. June 11 in the David Mack Arena.

The South Carolina Conference signed a resolution opposing discrimination against transgender people. They quoted statistics about transgender people being victims of verbal and physical abuse, which have resulted in murder, suicide or attempted suicide.

“In the spirit of advocating for safe sanctuary, we call upon every United Methodist to respond to acts of discrimination against transgender people with acts of compassion. We will take a public stand against speeches of hate, exclusion, harassment and acts of intimidation and violence filled with long-held prejudices,” the resolution stated.

“It is time for The United Methodist Church to lovingly acknowledge the existence of trans people and to work to end the rampant discrimination and violence rooted in distorted religious teaching and cultural prejudice,” he said. Reconciling Ministries advocates for full inclusion of LGBTQ people in the denomination.

The North Texas Conference passed a resolution affirming the decision made by the United Methodist 2016 General Conference to have the Council of Bishops form a special commission to look at all references to human sexuality in its Book of Discipline.

“We pray that members of our annual conference will demonstrate a spirit of compassion even when we are not of one mind,” states the resolution.

Gilbert is a multimedia news reporter for United Methodist News Service. Utley is the  editor of The Vision in the New York Conference.