The Rev. Dr. Peter Mageto is the fifth vice chancellor of Africa University and will be installed as the first non-Zimbabwean to lead the pan-African United Methodist-related institution during the 30th anniversary celebrations at the university on Oct. 22.

He said the role comes as an answer to his prayer and a fulfillment to his calling.

“As a young person going through formation, my call was to young people,” he said. “I needed to reach my generation with the word.”

Mageto was born in Nyamira, Western Kenya, to a working-class, non-Christian family.

“There were nine of us and mother never went to school; my father only went to second grade,” he said. 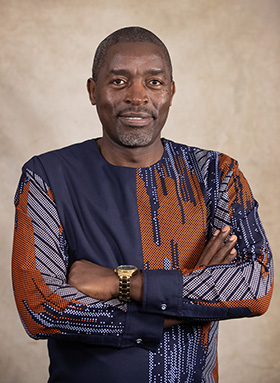 But his mother taught her children the valuable life lesson of contentment, he said.

“She taught us how to be content. She always said don’t use money you haven’t seen. If you don’t have it, don’t use it.” It is a lesson he has never forgotten.

He learned about and accepted Christ in high school. As he began telling everyone about his faith, a pastor told him he should be a pastor but needed a theological education.

He has a bachelor’s degree in divinity from St. Paul’s United Theological College in Kenya.

He got the name and address to Garrett-Evangelical Theological Seminary in Evanston, Illinois, from a classmate. That classmate is now United Methodist Bishop Daniel Wandabula, episcopal leader for the East Africa Area.

While attending Garrett-Evangelical Theological Seminary, Mageto became part of the ministry team at Aldergate United Methodist Church in Evansville. He became close friends with the Rev. Mitch Gieselman, now a district superintendent in the Indiana Conference.

At that time, Gieselman was lead pastor at Aldersgate. He remembers Mageto’s joy and deep faith.

“My immediate observation of Peter was that he was always so joy-filled. His smile was constant and infectious. He infused his joy, born of his unshakable faith, into everyone around him,” Gieselman said.

“But Peter is not all ‘feel-good’ only,” he added.

“His intellect, his wisdom, his passion for justice, and his Gospel-driven appeal for the inclusion of all are the things that make Professor Mageto the extraordinary and motivating leader that he is.”

One of Mageto’s top goals for Africa University is positioning graduates as leaders for the entire United Methodist Church.

“This place of faith becomes relevant in the formation of students,” he said, whether they pursue degrees in agriculture, business, social sciences or ministry.

“My vision and plan is to see that Africa University keeps its identity as pan-African and trains people for the continent of Africa. In fact, the first goal is to see alumni become mentors, create relationships.”

He said he wants to push the faculty and staff to think about what is the “niche” for the school. “What do we want to be known for?” he asks.

Mageto talked about the alliances the university has with UNICEF, the United States Agency for International Development, the World Intellectual Property Organization and others as part of his plan to continue to move the university forward in STEM education (science, technology, engineering and math).

“We have already started with public health. Africa University is now a center for malaria surveillance for Zimbabwe with major funding coming from USAID,” said Mageto.

The university breeds and collects mosquitos in the effort to eradicate malaria, which is especially deadly in Zimbabwe and other countries in Africa.

“We literally grow mosquitos on our campus,” he said.

He also wants to continue the blended education started during COVID-19 with students taking classes virtually as well as in the classroom. Africa University is already collaborating in this area with historically Black higher education institutions in the U.S. such as Claflin University.

“We were the first in Zimbabwe to begin two programs online before all other universities,” he said. The university has eight other programs ready to go online. They are only waiting on approval from the government.

Mageto said he would also like to see more on-campus space that would accommodate all 3,000 students currently enrolled. The university can only house 1,100 currently.

Mageto first served as deputy vice chancellor at Africa University in 2018 but said he dreamed of being on the campus since first reading about the university years before.

Gieselman said he is excited about Africa University’s future with Mageto as its vice chancellor.

“His vision, his energy and exuberance, his insistence that we honor Jesus’ commandment that we love one another, and his understanding of his duty as a leader, will pave the way for AU’s next generation to continue to thrive.”

Gilbert is a freelance writer in Nashville, Tenn.