First Grace United Methodist Church was born from the remnants of two congregations that lost members after Hurricane Katrina. The new church proceeded to shelter volunteers, students and the homeless.

So it seemed a natural extension of the congregation’s ministry to become a sanctuary church, said the Rev. Shawn Anglim, known as Pastor Shawn to his flock.

“We’ve always given sanctuary,” he pointed out.

Born from the merger of First Methodist and Grace United Methodist  — a white church and black church separated by about a mile — First Grace joins other United Methodist churches that have pledged to shelter and protect immigrants in danger of separation from their families or being returned to countries they fled. 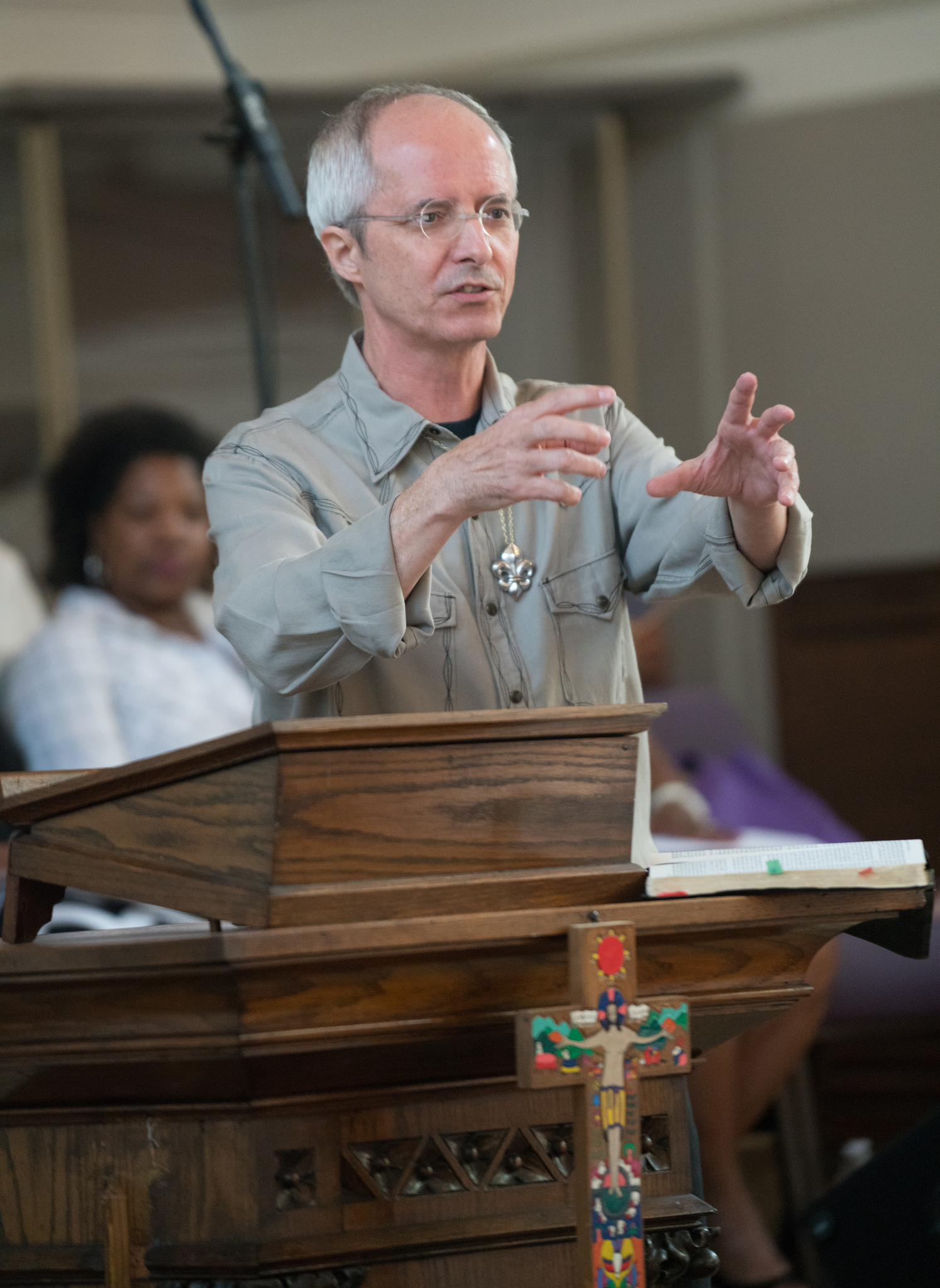 The Rev. Shawn Anglim said First Grace United Methodist Church will be a sanctuary church, willing to shelter undocumented immigrants in danger of being separated from family or returned to countries they fled. Photo by Art McClanahan, UMNS.

The Obama administration, which deported more than 2.5 million immigrants — the most any presidential administration — moved toward a focus on deporting convicted felons, gang members and others regarded as security threat. A Trump executive order allows Immigration and Customs Enforcement wider latitude.

Louisiana Area Bishop Cynthia Fierro Harvey said First Grace is the only church in the conference that has declared itself a sanctuary church.

Anglim, Harvey and members of the church welcomed the United Methodist Association of Communicators on March 23 for worship and a discussion of the beginnings of the church, which is now a diverse congregation with numerous outreach ministries, including housing for the homeless and a legal clinic. The communicators heard about a lively and growing children’s ministry and a Spanish-language worship service attended by about 45-50 worshippers each Sunday.

Anglim said First Grace has “the most United Methodist sanctuary” in the U.S. because of all the things provided by the connection — from chairs to volunteer labor for cleanup and rebuilding — after Katrina. He detailed donations from other United Methodist congregations and the many volunteers who repeatedly came to clean up and build things after Hurricane Katrina.

“This story goes on and on,” Anglim said, noting the conference paid his salary as pastor for the mission zone where the church is located and that Harvey has paid for the salary of the Rev. Juanita Ramos, a community development pastor who leads the Hispanic worship at the church.

Without the United Methodist connection, Anglim said, there “would be no First Grace.”

Harvey told the communicators that First Grace has a unique place in New Orleans and a pastor who is “extraordinarily creative.” But she said the church and the Louisiana Conference want to be known as more than Katrina survivors; they want to be known “as people who persevered through some difficult challenges.” 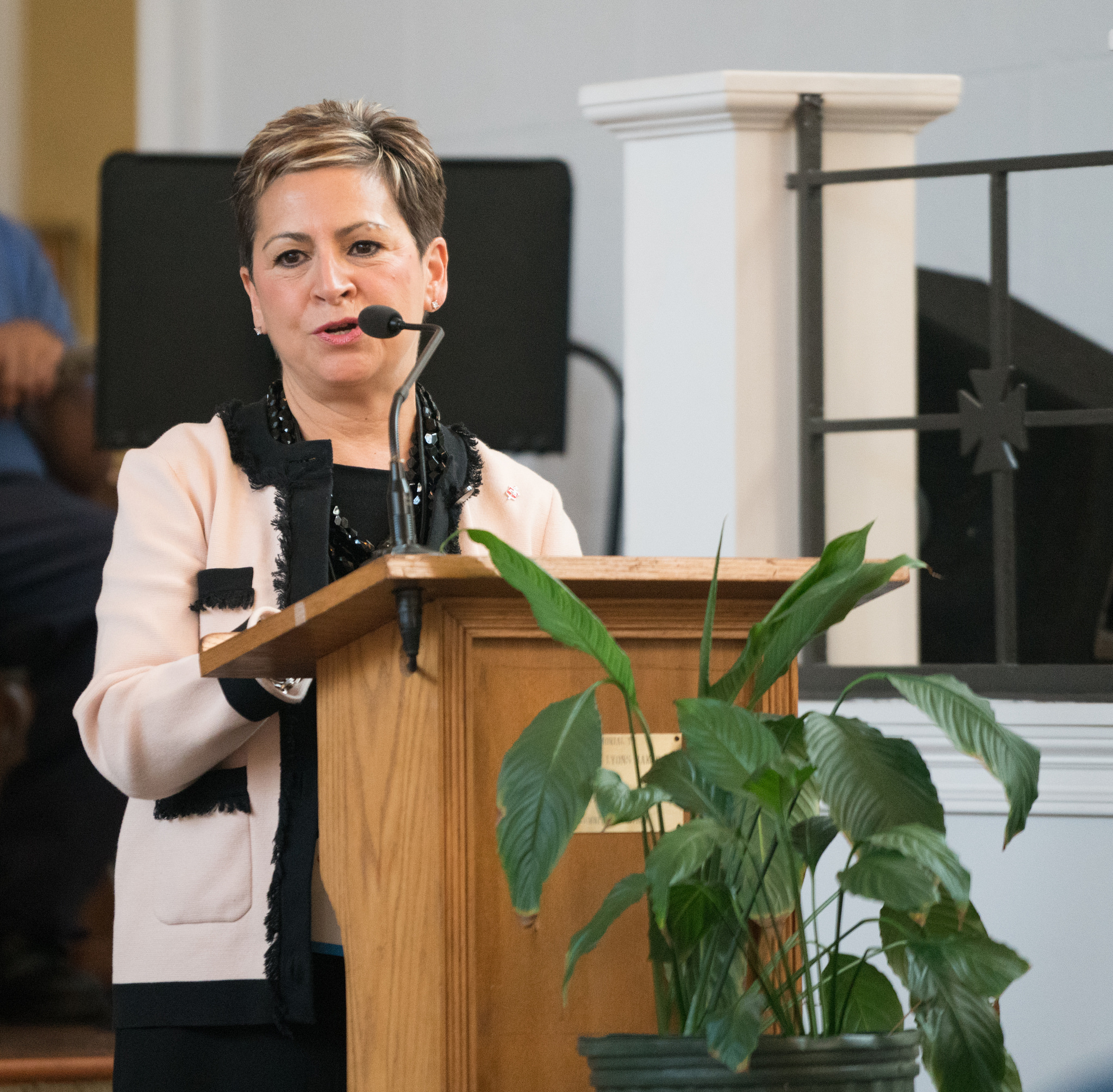 The merger of the two churches began with a question, Anglim explained. “We asked the question, ‘Do you believe we can do more for our city as one body of Christ than as two a long mile apart?’ ”

Answering yes meant ignoring 400 years of why whites and blacks should not trust each other, he said.

Margaret Washington, a member at Grace and lay minister at First Grace, recalled the first joint worship service with Grace members on one side of the church and First members on the other. But First was an aging congregation and both churches had lost members who had moved away after Katrina.

Members agreed to have another joint worship service and sit next to someone they didn’t know. “We never looked back,” Washington said.

The new church hosted numerous Katrina volunteer groups and became home to an intentional community of Louisiana State University students who came up with the plan for Hagar’s House, a homeless shelter.

One of those students went to law school and started the church’s legal clinic, which Anglim said has most recently been focusing on immigration issues — including drawing up guardianship paperwork spelling out who would care for the children of undocumented parents who fear deportation.

Talk about becoming a sanctuary church started last fall. “We wanted to do something to support the immigrant community,” Ramos said, noting that many immigrants come to the church and are involved in programs like the pre-school and the legal clinic. In addition, the church provides meeting and office space for a Congress of Day Laborers that formed after Katrina when many immigrants moved to New Orleans for construction and other jobs.

While there is no law against it, U.S. Immigration and Customs Enforcement has an unofficial practice of not going into churches or hospitals to take immigrants into custody.

By the time the proposal went before the church council, Ramos said, there was really no opposition. “We’re putting our faith in action."

Has the church taken in any undocumented immigrants?

Anglim said he would leave it that the church has stated publicly it will be a sanctuary church. The release of any details about an immigrant or family who sought shelter would depend on the circumstances and willingness of an immigrant to have his or her story published, he said.