It will no longer take the Rev. Okamba Katako two hours by foot to get to new church members in his district in Tunda.

With a new bicycle purchased through support from Crosspoint Church, a multi-campus United Methodist congregation in Northwest Florida, he now can get around easily and save travel time.

More than 50 other United Methodist pastors in the Tunda District each received a bicycle and a Bible thanks to the Crosspoint congregation’s donation.

“To do evangelization, pastors are forced to walk dozens of kilometers. Many of them do not have a Bible,” said the Rev. André Okonda, superintendent of the Tunda Ecclesiastical District. 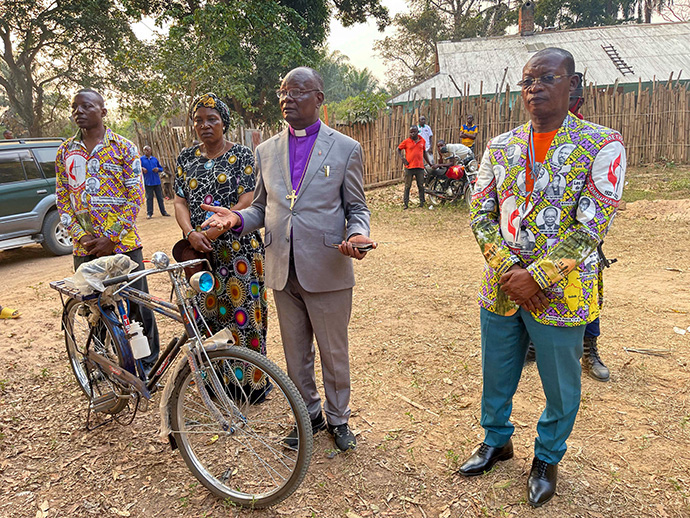 United Methodist Bishop Gabriel Yemba Unda (center) addresses pastors in Tunda during a ceremony to give them bicycles and Bibles. At right is Chief Prosper Tunda Kasongo Lukali, traditional chief of the Tunda-Dikungu village. Photo by Chadrack Londe, UM News.

Tunda-Dikungu is the village that welcomed the first American missionaries in 1922. Recently, to celebrate the first 100 years of the Methodist mission in eastern Congo, bishops, clergy and laity representing the four episcopal regions of The United Methodist Church of Congo gathered for festivities in Tunda.

In Congo, the bicycle is used by millions of people in rural areas. Although motorcycles are making rapid inroads, the bicycle remains king where fuel is not available. The rural bicycle is more often pushed than ridden.

On many stretches in the territory of Kibombo, in particular, the bicycle represents the main means of transportation.

“Especially in rural areas, it is not uncommon to find bicycles heavily loaded with palm oil cans plying the sandy roads," said Prosper Tunda Kasongo Lukali, chief of the Tunda-Dikungu village. Palm oil is used in cooking and to make soap. 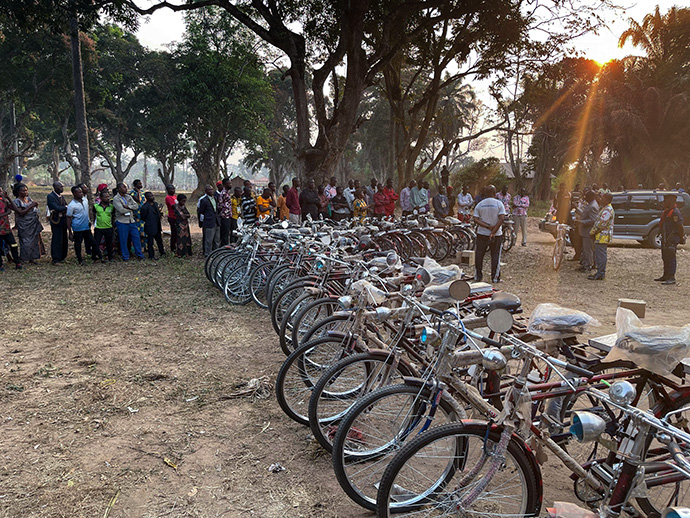 Bicycles are the primary means of transportation in rural Congo. Photo by Chadrack Londe, UM News.

Okonda said that in many villages where United Methodist churches are located, the bicycle is considered an ambulance.

“When a woman is about to give birth, the villagers go to the pastor's house to take the bicycle, transport the patient and bring her to the hospital,” he said. “The bicycle helps in the transport of people and goods.”

Pastor at the local Diefu United Methodist Church in Tunda District, the Rev. Musafiri Tchongoso, is looking forward to using his new bicycle for errands, including attending monthly meetings.

“I am happy because now it is easy for me to go to the district council (meeting) without too much difficulty,” he said.

The Rev. Ngongo Asaka and his associate, the Rev. Akoka Mokanga, from the local United Methodist church in Lunga, also are excited about their new gifts.

“My new Bible will replace my old one, many of whose papers are already torn,” Asaka said. “I thank the Crosspoint United Methodist congregation for sending us these gifts.

“With my bicycle, I will no longer have to walk hundreds of miles to make disciples of Jesus Christ,” he said.

“I have a large mission field of evangelization of which the great part is rural. (That) requires the support of partners like the church of Crosspoint, which is not at its first action in my episcopal region,” he said.

“These bicycles will help the pastors to move around to advance the work of God through strong evangelization,” Unda said. “We are very, very, very joyful. … May God bless all the faithful of Crosspoint who do not hesitate to think of the vulnerable populations of my episcopal region.”