• The First Americans Museum is open for business after a grand opening Sept. 18-19.

• The huge facility tells the stories of the 39 Native American tribes in Oklahoma.

• United Methodists from the Oklahoma Indian Missionary Conference are involved with various facets of the new museum.

The Native American experience during and after colonization has been told before, often inaccurately. For examples, seek out most Hollywood Westerns.

The First Americans Museum in Oklahoma City aims to get it right, at least the Oklahoma part. The $175 million, 175,000-square-foot facility is an effort to cover the history of Oklahoma’s 39 federally recognized tribes. Its grand opening weekend Sept. 18-19 drew thousands to get a first look. 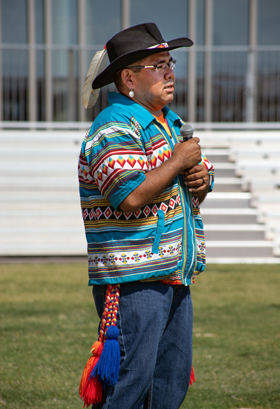 The Rev. Chebon Kernell, a United Methodist elder and executive director of the denomination’s Native American Comprehensive Plan, attended a groundbreaking for the museum more than 15 years ago. It has faced numerous delays, mostly around funding, through the years.

“I was a young man back then,” Kernell recalled. “We did some blessings at sunrise on that morning (of the groundbreaking). They’ve also used me as a kind of a tribal consultant as they’ve gotten closer to the opening date and got their exhibitions in order.”

His priority in being involved is “to ensure that the story is being told from the perspective of Native American/indigenous peoples.”

United Methodists from the Oklahoma Indian Missionary Conference are involved with various facets of the museum.

“A good number of the volunteers will be from our Indian Methodist churches and the OIMC, and several of the staff members are connected to the Oklahoma Indian Missionary Conference,” said the Rev. David Wilson, assistant to the bishop in the OIMC, who co-chaired the committee for one of the venues at the grand opening.

The museum will be “one of the best tourist destinations in the country,” said artist Kelly Haney, a painter, sculptor, former chief of the Seminole Nation and former state lawmaker who filed the legislation in the 1990s that led to the First Americans Museum. The site of the museum is on prime real estate at the intersection of Interstates 35, 40, 235 and 44 along the Oklahoma River across from downtown.

“An older lady asked me about whether there was a cultural center for them,” Haney said. “I just kind of worked on it with other people from time to time and we were able to pass legislation (in the 1990s) to set up an authority to establish that cultural center.” 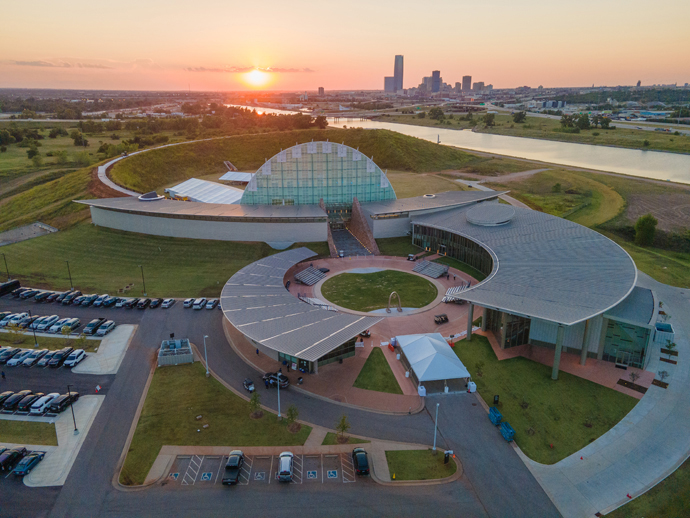 Oklahoma City provided the 265 acres of land and $5 million to get the project started, Haney said.

The land was the former site of a large oil field and had to be cleaned up before construction could begin, said Ginny Underwood, marketing and communications manager for the museum.

“After the oil wells dried up, it became a dumping ground,” said Underwood, who is United Methodist. “They had to cap all those oil wells and they had to clean out garbage and tires. It took several years.”

Native Americans held a ceremonial blessing to “heal the land,” and the groundbreaking occurred in 2005.

Before that, however, the site lay dormant for several years in the 1990s after the state pulled funding. Some say that happened because of the Republican takeover of the state legislature, while others blame Oklahomans outside of Oklahoma City who weren’t keen on paying for a project that would mostly benefit the city.

“I don’t know all the particulars, only that the legislature, which had turned from Democrat to Republican, chose not to continue to fund it,” Haney said. “We had to find other ways to fund it. We never gave up. That's the bottom line here.” 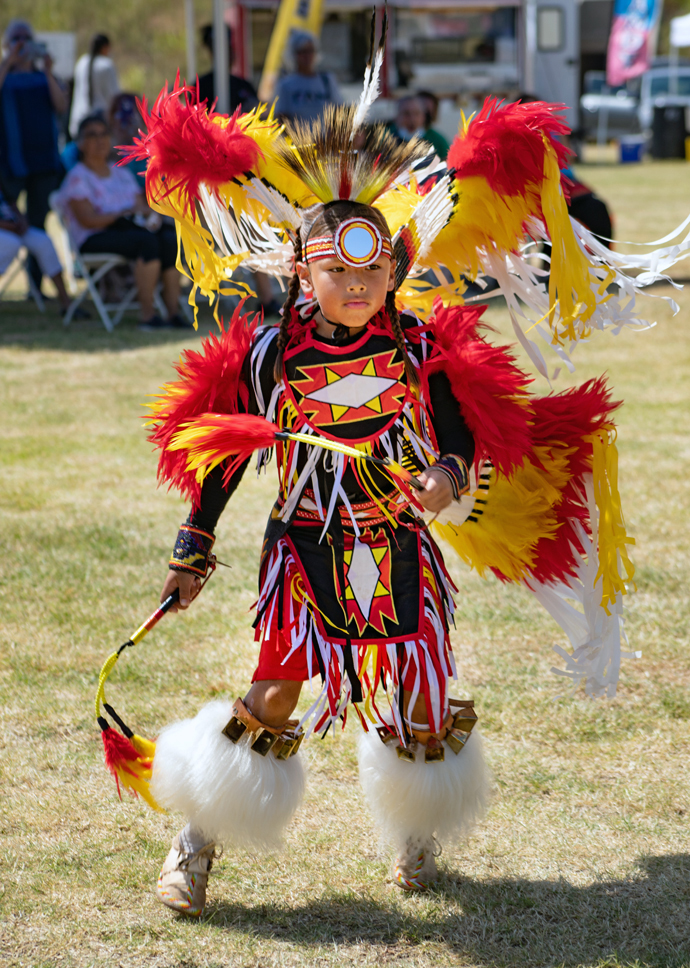 In 2019, a deal was announced for the state to provide $25 million for the First Americans Museum, contingent on a private match. The Chickasaw Nation, a prosperous tribe, provided a “substantial” amount of funds, although the exact amount wasn’t released.

“The Chickasaw Nation have an enormous, expansive revenue system,” Kernell said. That includes casinos, a manufacturing arm that makes air purification units and other products, radio and television stations, a film studio and newspapers.

The Rev. Alvin Deer, pastor of Angie Smith Memorial United Methodist Church in Oklahoma City, is featured in the museum and has appeared in films as an extra, as did his father. As a youth, Alvin Deer danced as an Indian at Disneyland and appeared later in a Roy Rogers movie, the comedy “It’s a Mad, Mad, Mad, Mad World,” and the television film “A Man Called Horse.”

The Oklahoma Indian Missionary Conference will hold its annual Immersion experience — which includes a tour of the new First Americans Museum — Oct. 24-28 in Oklahoma City.
Participants also will visit the site of a famous Native American massacre and a bronze statue of Chief Standing Bear.
Thirty to 60 Cheyenne Native Americans, mostly women and children, were slain Nov. 27, 1868, at the Washita massacre in Cheyenne, Oklahoma, by troops led by Gen. George Armstrong Custer. Eight years later, Custer and his troops were killed during the Battle of Little Big Horn by the Lakota, Northern Cheyenne and Arapaho tribes. The visit to the Washita complex will include a tour of the cultural center and visit with a Cheyenne prayer woman.
The 22-foot statue of Ponca leader Chief Standing Bear is in Ponca City, Oklahoma. During this outing, participants will hear from tribal leaders about current Native American issues.
Registration for the 2021 immersion experience is closed.

Growing up with Hispanic friends, Deer said they didn’t believe him when he claimed to be Native American.

“They thought John Wayne had killed them all,” he said.

With 39 tribal nations to cover, the museum had to look for commonalities rather than tell each group’s full story, Underwood said.

“Only four tribes were indigenous to this territory, and the other 35 were forcibly removed here,” she said.

All the stories in the First Americans Museum are told in the first person.

“We have an all-Native curatorial team, which we’re very proud of, and we're probably the only museum in the world that can say that,” Underwood said. “So you're going to get the most authentic experience on first Americans past, present and future that exists today.”

Exhibits are dedicated to the origin stories of the tribes, removal from their ancestral lands to make way for white settlers, attempted assimilation and hostilities such as the Sand Creek massacre, which was led by a Methodist pastor. There’s a small section dedicated to kitsch misrepresentations of Native American culture, side-by-side with a view of contemporary Native American life. An exhibit highlights sports and games, with information about athletes including Jim Thorpe and Johnny Bench.

“Then we get into a warrior zone,” Underwood said. “Our warriors aren’t always about going to war or fighting. Oftentimes, it’s the spirit of a warrior, which is caring for the community and taking care of people. … Warriors also include teachers and medical professionals and people like that.”

Ending the exhibits on that note is a purposeful move.

“One of the biggest takeaways that we hope that people have is that we’re very much a living culture,” Underwood said. “We practice our cultures and traditions. We have a living culture.”

Patterson is a UM News reporter in Nashville, Tennessee. Contact him at 615-742-5470 or [email protected]. To read more United Methodist news, subscribe to the free Daily or Friday Digests. 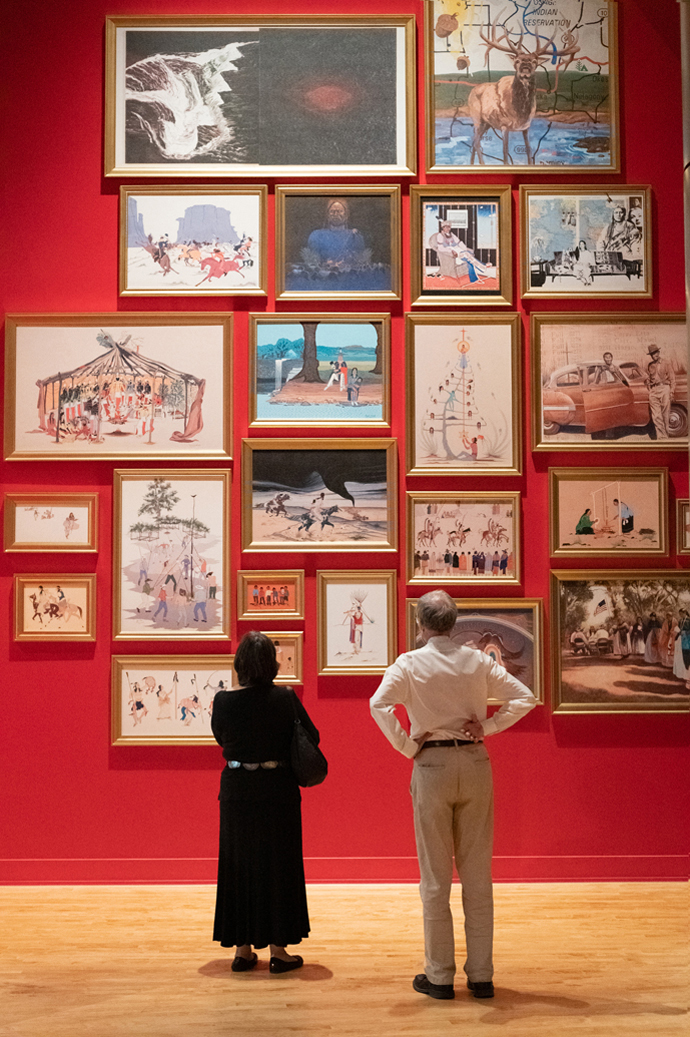