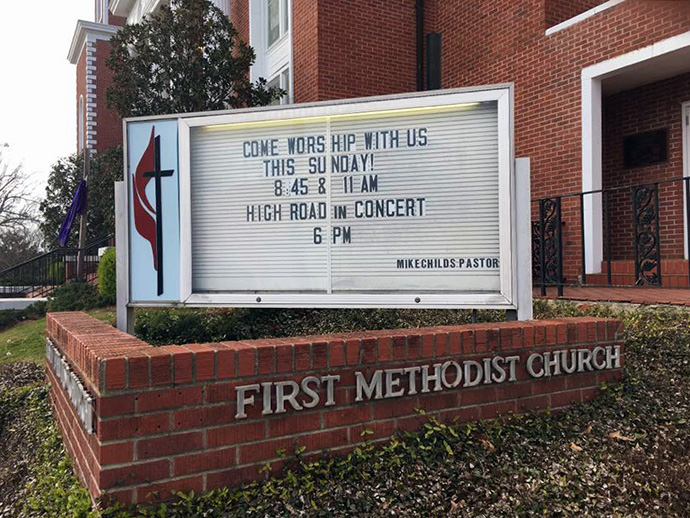 The settlement ends the 2-year-old lawsuit between the conference and First Methodist Church in Louisville, Mississippi. With the agreement, the Winston County Chancery Court dismissed the case on March 31.

Bottom line: The breakaway First Methodist Church will continue to use its longtime building, while the smaller First United Methodist Church will worship elsewhere. Both congregations had been sharing the same tall-steeple, historic building in Louisville, a county seat about 95 miles northeast of Jackson.

As it happens, the lawsuit ends when neither congregation is actually worshipping in the building. Both have been worshipping online to slow the spread of the coronavirus. Mississippi’s governor issued a statewide shelter-in-place order April 1 in effect through April 20.

The settlement includes a nondisclosure agreement, which means the parties promised to keep financial and other details confidential.

“What I can say is that I am elated about how concluding this process is going to aid in reaching the goals of our United Methodist connection and mission in Louisville,” said Mississippi Conference’s Bishop James Swanson Sr. in a statement.

“I thought it was a very fair settlement for all concerned,” Childs told UM News. “As far as I know, the conference did as well.”

He also said his congregation considers the people who chose to remain United Methodist as “friends and neighbors.”

“We just disagreed on some things,” he said.

At the time, Childs expressed frustration with The United Methodist Church’s ongoing debate around homosexuality. He was particularly troubled that church bans on same-sex unions and “self-avowed practicing” gay clergy went unenforced in parts of the denomination.

The conference claimed the property used by the congregation under the trust clause of the Book of Discipline, the church policy book. The clause, which dates to 1797, states that local church properties are held “in trust” for the denomination, even if the congregation’s name is on the title.

However, Childs argued that under Mississippi law, the property should belong to First Methodist Church of Louisville.

That’s when the lawsuit began.

In June 2018, lawyers for First Methodist and the Mississippi Conference agreed that the two congregations could share the building while litigation proceeded.

In recent years, the Mississippi Conference has seen some high-profile departures.

The Orchard in Tupelo and Getwell Road in Southaven, two large churches, exited the denomination in 2017. The two churches left with their property, which had heavy debt, in exchange for a financial settlement with the conference.

Last year, seven additional Mississippi churches left the denomination under legislation passed by the 2019 special General Conference that allows churches to exit based on disagreements related to homosexuality.

With the Louisville lawsuit concluded, Swanson sees a brighter future ahead.

He told UM News that the church’s ability to make disciples has increased.

“There is a place in Louisville, Mississippi, for our United Methodist understanding of the Gospel of Jesus Christ and we’re grateful for that,” he said. “Also, the level of commitment to Christ and the mission and ministry of The United Methodist Church has grown, and I’m really excited about that.”

Since 2018, leaders of both Louisville congregations say their membership has grown.

Both churches also have continued to do ministry. Childs said First Methodist remains one of the community’s main distributors for Backpacks of Hope, which provides food for schoolchildren who might otherwise go hungry.

Larry Woodward, a lay member of First United Methodist, told the conference his church has been working with an assisted living facility. The congregation also packed buckets of cleaning supplies for households affected by recent flooding.

With the lawsuit in the rearview mirror, leaders of both churches say they look forward to doing more ministry.

“My hope is that we can just get on with the work of the Kingdom,” Childs said.

The Rev. Tom Potter, pastor of First United Methodist Church, said his congregation is ready to make up for lost time in following Christ's Great Commission to make disciples.  "As we move forward from the settlement," he said, "we are excited to see the ways God will provide for his ministry to be accomplished.”

Childs also said in a statement that his church sincerely wishes the local United Methodist congregation “our very best in their new location.”

Both congregations are showing their worship services on Facebook in the meantime.