Editor’s note: Due to the political climate in Laos and the risks facing church workers, initials are being used in this story to identify sources who are serving in the country or may travel there in the future.

For the first time in its 16-year history, the members of the Methodist mission in Laos celebrated their annual gathering in the country they are serving.

One hundred eighty members from across the country gathered Aug. 30-Sept. 4 in Vientiane for the first such meeting in Laos since the LSMC mission officially started in 2006. The previous 11 gatherings were held across the Mekong River in Thailand, and the last two years’ gatherings were canceled because of COVID-19.

With a theme of “Empowering Leaders Toward a Vitalized Church,” the event included the ordination of new leaders and the recognition of such ministries as the newly launched Community Health and Agricultural Development Program.

The second day of the gathering was filled with praise and worship, personal testimonies and lectures by the bishop and the Rev. L.C., a senior pastor from Houston and chairperson of the board of ordained ministry.

Jones talked about the partnership between laity and clergy in the organization of a local church, and about the cycles of worship, teaching, service and witness. He described the gifts that God gives Christians and how the body of Christ has a diversity of gifts, and the role of the pastor. He encouraged the lay people to remember that they are gifted as they help the church in its purpose and its ministries.

The business session included many reports and celebrations.

“We want you to witness how God has been so gracious in providing our needs to continue our noble tasks,” said the Rev. I.P., mission superintendent, in his report. “We are giving impact to our faith communities and villages in the … provinces around Laos.” 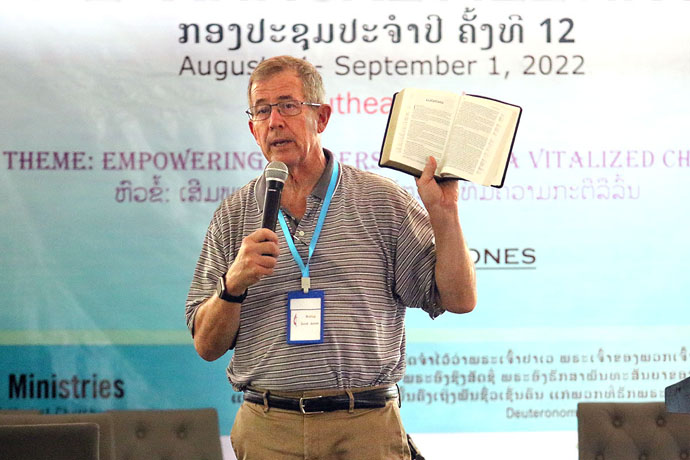 Bishop Scott Jones leads a Bible study on Aug. 31 during the 12th annual gathering of the LSMC mission in Vientiane, Laos. With a theme of “Empowering Leaders Toward a Vitalized Church,” the event included the ordination of new leaders, worship and other celebrations. Photo by Thomas E. Kim, UM News.

I.P. reported that the Laotian Church has launched the Community Health and Agricultural Development Program through the initiative of the Asian-Pacific Regional Office of the United Methodist Board of Global Ministries in partnership with the Wesleyan Foundation of Japan. Its mission is to respond to the challenges facing local communities in Laos.

The program is working on improving personal and communal health conditions by increasing access to clean, safe water and sanitation facilities and through education.

When they started coming to Laos six years ago, the Texas Conference team found there were no credentialed clergy in Laos because the mission was not a provisional annual conference. However, it had some local pastors, and the team began the process of credentialing them.

This year, two elders were ordained and five were commissioned after being examined by the bishop and four members of the Texas Conference board of ordained ministry.

“Our job is to come to equip to teach and also to give credentials,” said the Rev. L.C., who has attended the gathering five times. “We're going to interview to see if there are people who are ready to be commissioned as pastors in mission, and there are two that we're going to interview to see if they're ready to be ordained pastors as elders in mission.

“Our role is to help equip not only the pastors but the laity as well, so that they can grow and become a self-sustaining provisional conference. We just try to help them grow as leaders and to help them equip their church.”

Texas members had challenged the mission to include women in ministry and leadership. This led to a schedule change to include women during the leadership training and lecture rather than have a separate women’s session, and most worship services were led by women.

The Rev. L.C. said women’s status in the church changed significantly at this gathering.

“It was very significant that they adjusted their schedule to allow this,” she said. “It is the first time to adjust the schedule so that many women could be with male leaders, and now they can see what difference they bring, and how they can encourage one another. It’s hard to know how much to push because culturally it's not there, but this shows just a little bit of movement and encouragement bringing them together, showing that we’re in ministry together.”

The Rev. K. was one of two ordained elders at the annual gathering. “I am so thankful and feel blessed to be ordained as an elder to preach and spread the good news of Jesus Christ to my people,” she said. “I will do my best to praise God and to glorify God through my service.”

The bishop was optimistic about the future of the mission church.

“The (LSMC) mission church has great potential,” he said. “We just ordained two and commissioned five. The younger clergy are gaining confidence and knowledge. I am just very pleased with all the progress that they have made. It was the biggest crowd. I felt a strong sense of God’s spirit, and I have a sense of optimism about the future. This is just a real blessing to be here.”

Abingdon Press has published a revised edition of “American Methodism,” its history of The United Methodist Church and its predecessors. The new version adds a chapter covering 20 years of contentious debate over sexuality.
Discipleship