In a speech given four months after he was elected president of South Africa, Nelson Mandela acknowledged the role the Methodist church had played in his life and applauded the church for its efforts against apartheid.

"The spirit of reconciliation and the goodwill within the nation can, to a great measure, be attributed to the moral and spiritual interventions of the religious community," he said during the Sept. 18 address to the Annual Conference of the Methodist Church of Southern Africa.

Now, as Mandela marks his 95th birthday on July 18, Methodists - and many others around the world - are applauding his accomplishments.

Mandela was a firm believer that social transformation could not be separated from spiritual transformation, the Rev. Ivan Abrahams, a South African and top executive of the World Methodist Council, told United Methodist News Service.

He embodied the struggle for transformation. "You knew you were in the presence of a great person," Abrahams said. "He is a man inspired and a man who inspires. He is an icon of the struggle for good over evil who ennobles the human spirit of all humanity."

Throughout the years, that inspiration has touched upon Methodists worldwide. In 2000, Mandela received the World Methodist Peace Award.

While growing up in Germany, Thomas Kemper considered Mandela a hero. "He represented the best of our Methodist tradition and showed courage and determination in the face of enormous odds," added Kemper, who leads the United Methodist Board of Global Ministries.

In the United States, Mandela has had "tremendous influence on leaders in the civil rights movement and the black church," recalled retired United Methodist Bishop Melvin Talbert, who helped the World Council of Churches monitor the 1994 presidential election in South Africa. "His legacy will live on for generations to come."

Jan Love, a long-time United Methodist leader in the WCC who now is dean of Candler School of Theology in Atlanta, noted how well Mandela's humbleness and resourcefulness have served humanity.

"His political acumen, personal discipline and perseverance against entrenched oppressive systems and overwhelming odds have few equals anywhere," she said. "He helped others around him rise to their greatest potential and highest ethical standards." 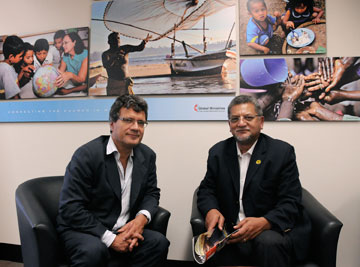 Methodist schooling helped form Mandela's own standards. At the age of 7, he started at Clarkebury Methodist Missionary School and then attended Healdtown Methodist College, a boarding school started by Methodist missionaries in 1845.

Kemper remembers Mandela talking about his generation being a product of a church education during his address to the 1998 World Council of Churches Assembly in Harare, Zimbabwe. "Nelson Mandela was extremely gracious toward the churches, missionaries and the educational opportunities that mission agencies afforded to young black South Africans, including himself, when none else would," he said.

At Healdtown, Mandela met the Rev. Seth Mokitimi, then the school's chaplain and later the first black person elected to lead a major denomination in South Africa. The importance of that connection, Abrahams said, is reflected by the fact the library at Seth Mokitimi Methodist Seminary is named for for Mandela and for Robert Sobukwe, another Methodist champion against apartheid. "That is something absolutely unique with the Methodist church trying to pay tribute to these two icons," he pointed out.

Religious communities both inside and outside South Africa supported the decades-long struggle by Mandela and the African National Congress against the apartheid system of racial segregation, including advocating for economic sanctions. For 10 years, the Methodist Church there was declared an illegal organization by the government.

"Especially while political leaders were in prison and in exile, bodies like the South African Council of Churches and its member churches resisted racial bigotry and held out a vision of a different, transformed South Africa," Mandela noted in his 1994 address to South African Methodists.

Representatives of the World Council of Churches were banned from South Africa for 20 years because of the ecumenical organization's anti-apartheid activism through the controversial Programme to Combat Racism.

Later, Mandela publicly thanked the council for inspiring opponents of apartheid and striking fear into those who supported a racist system of government.

In his address at the 1998 WCC assembly, Mandela detailed exactly how important such support was to those who had been imprisoned. "They tried to isolate us completely from the outside," he explained. "Our relatives could only see us once every six months. And we could only write and receive one letter every six months. The link was religious organizations, Christians, Muslims, Hindus and members of the Jewish faith. They were the faithful who inspired us."

After spending more than 27 years in prison, Mandela visited New York in June 1990, four months after his release. During a joyous service at Riverside Church, "the faithful" cheered and even danced in the aisles.

Talbert officially represented The United Methodist Church at the service. At a meeting in the chapel before the service, Mandela was greeted by more than 120 interfaith religious leaders, including 11 United Methodists, and presented with a $200,000 check for humanitarian aid and the resettlement of South African refugees.

It was Mandela's actions and attitude after regaining his freedom that really defined him as a statesman.

His generosity and graciousness to those who imprisoned him was an inspiration, Love said. "He insisted that those who have been wronged must strive to forgive the wrong-doers in order to bring the struggle for justice full-circle to a place of health and wholeness for all."

"When we were in prison, you did not forget us." In rare footage, Nelson Mandela speaks to interfaith leaders shortly after his release from prison. Read transcript

"He is the defining symbol of how one person can make a difference in this world by refusing to be browbeaten or silenced," Abrahams said.

As South Africa's president, Mandela called religious leaders together in 1997 to discuss a partnership to transform society. The result was the formation of the National Religious Leaders Forum, said Abrahams, who was co-chair of the forum from 2005-2011.

"He (Mandela) argued, 'neither political nor religious objectives can be achieved in isolation,'" he added. "'They are held in creative tension with common commitments. We are partners in the building of our society.'"

Abrahams called the forum part of Mandela's legacy. There are very few countries, he pointed out, "where at least twice a year the religious leaders from all faiths and traditions meet with the president and the cabinet and raise issues on policy."

Many Methodist clergy also were involved in the Truth and Reconciliation Commission instituted by Mandela, he said.

In a speech at the first Triennial Conference of the Methodist Church of South Africa in Durban on July 17, 1998 - the day before his 80th birthday and his wedding to Graa Machel - Mandela spoke of the "crucial role" the commission played in rebuilding the nation.

"True reconciliation will come about when those who were divided confront their past, join hands and overcome the legacy of poverty," Mandela said.

"Religious communities have a vital role to play in this regard," he told his church audience. "Just as you took leading roles in the struggle against apartheid, so too you should be at the forefront of helping to deliver a better life to all our people."