• A United Methodist pastor is recruiting clergy to conduct graveside funeral services for homeless people and others who might not otherwise be mourned.

• The Call the Name program hopes to attract clergy from other Christian denominations as well as Muslim and Jewish leaders.

On a sunny, windy November morning at Hills of Calvary Memorial Park, almost everyone was assembled.

Three pastors were there to lead five short funerals. Gravediggers and funeral home employees went about their responsibilities amidst the stunning fall foliage. Bodies of the recently departed were present and accounted for — bar one, which arrived late because of a traffic jam.

Only one element was missing at this cemetery in an industrial area on the outskirts of the city: no family or friends to mourn.

The pastors wouldn’t necessarily be there either, save for the Call the Name program. The new effort by a United Methodist pastor seeks to provide clergy to acknowledge deceased people who haven’t been claimed by anybody. Often those are homeless persons.

“We don't know if they lived a good life or a bad life,” said the Rev. Jay Voorhees, the lead pastor at City Road Chapel United Methodist Church, who organized Call the Name. “All we know is that they are a child of sacred worth that is deserving of respect and honor in their death.” 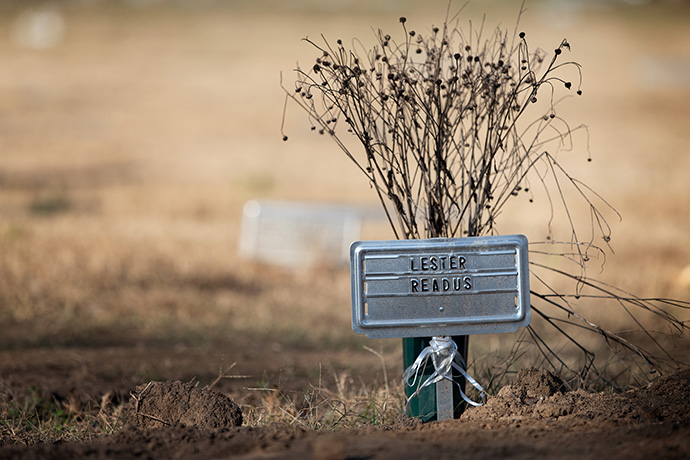 The grave of Lester Readus is identified with a temporary marker at Hills of Calvary Memorial Park in Nashville, Tenn. His burial was provided for by the Indigent Burial Program of Metro Nashville Social Services, which will also pay for a permanent, stone marker when it is finished. Photo by Mike DuBose, UM News.

Metro Nashville’s Indigent Burial Program is run by the city’s social services department, which provides about $3,100 in funeral services for deceased people when no one claims the body, said Carol Wilson, a program director for social services. Families who don’t have the resources to bury a loved one also can apply, she added.

The Indigent Burial Program has been going on in Nashville stretching back to at least the 1950s, she said.

“We contract with four funeral homes that do the preparation of the body,” Wilson said. “The cemetery provides them with opening and closing of the grave and also a grave marker. … So they do receive the respect of a dignified burial service.”

Everyone merits acknowledgement, even if it’s brief, said the Rev. James Cole of Antioch United Methodist Church, one of the 30 to 40 clergy who have offered to help. Most are United Methodists so far because that’s the group where Voorhees has the most contacts, but the hope is that other denominations as well as Muslim and Jewish clergy will volunteer.

“There's a lot of work to be done in terms of recruiting other pastors and other faith traditions,” Voorhees said. “We're still in the process of that.” 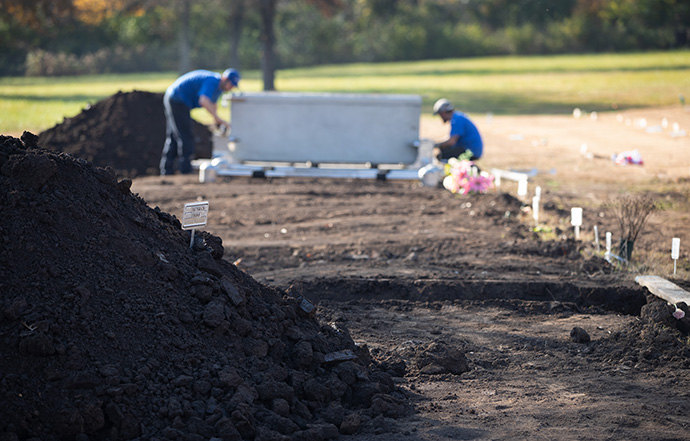 Workers from Wilbert Funeral Services prepare one of five burial vaults for interment at Hills of Calvary Memorial Park in Nashville, Tenn., prior to services for Nashville residents who died and weren’t claimed by anyone. Photo by Mike DuBose, UM News.

At Hills of Calvary, the Revs. Luke Lea and James Cole presided over the five funerals with Voorhees. Lea is lead pastor at Matthews Memorial Church.

“I think it's important to call people's names before God and whatever community is gathered to recognize that they are children of God with inestimable worth and dignity,” Cole said. “And though they were at times abandoned and forgotten in this world, they're never abandoned by God.”

City Road Chapel has been ministering to homeless people for years. The church offers showers and laundry service and provides space for homeless advocacy groups in its building.

“We discerned along the way that we are called to minister to the neighbors we have, not just the neighbors we want,” Voorhees said. “A lot of the folks that are around (the church) are homeless folks. Because of the location of our church, we really didn't have any choice but to take on this calling to offer love to homeless folks.”

It’s important that the funerals are not perceived as an endorsement of any particular brand of religion.

“(The concern of city officials was), we don't want to feel like we're proselytizing because of separation of church and state and all of that,” Voorhees said. “So we had to work through how that was all going to work.”

Also, since they don’t know the religious views of the deceased, they wish to avoid saying anything that might have offended them.

Voorhees has fashioned a funeral service that briefly pays tribute to the deceased, saying repeatedly that, “we remember them.” It concludes: “May this be a place of quiet rest, and may his-her name never be forgotten.” 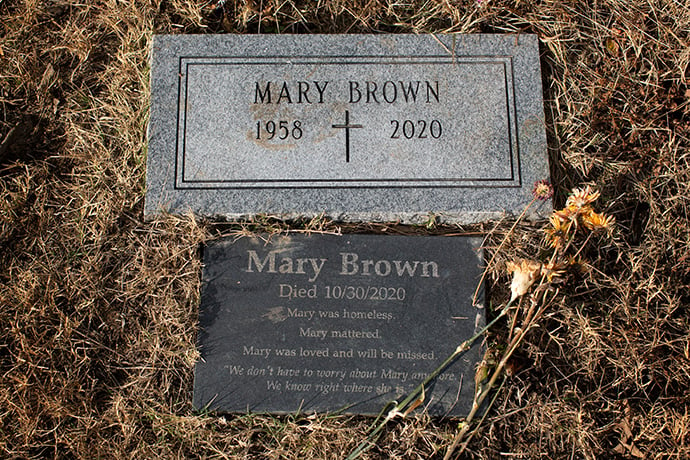 A gravestone and memorial plaque mark the final resting place for Mary Brown at Hills of Calvary Memorial Park in Nashville, Tenn. Brown, who was homeless, was buried there by the Metro Nashville Indigent Burial Program. Photo by Mike DuBose, UM News.

Although remembering the dead at a funeral is important, it shouldn’t overshadow what people need while they’re alive, Lea stressed.

“The church spends a lot of our time with birth and death and even resurrection,” Lea said. “But we have to think about how resurrection comes about between people's births and deaths. How we can help people be resurrected in between?”

A lone mourner arrives too late for the service for Melissa Orrick, the sole woman being interred. The woman pours some of the Crown Royal she is carrying on the grave, a last drink of whiskey for the deceased.

Cole and Lea, separately, approach the woman. They each console her and pray with her. They hope it helps.

Larry Magee’s paintings have been displayed at the Tampa Museum of Art and the Ferman Center for the Arts at the University of Tampa. Thanks to an art therapy class at Hyde Park United Methodist Church in Tampa, Fla., McGee says he has found his "happy place." Joe Henderson with the Florida Conference reports.
Local Church

A fort made up of 700 pillows got people reconnected at Lake Harriet United Methodist Church in Minneapolis, Minn. The effort ended with three Federal Express trucks full of pillows headed to homeless ministries. Christa Meland with the Minnesota Conference has the story.
Human Rights