The Rev. Arturo “Artie” Cadar gave up a six-figure salary in the business world — and his Mercedes Benz — to become a licensed local pastor in The United Methodist Church.

He credits a Walk to Emmaus experience with deepening his relationship with Jesus Christ and putting him on the path to ministry after a career that included heading Hallmark Cards sales in Latin America and Spain.

“A lot of my family thought I was crazy,” said Cadar, a 56-year-old Cuba native. “I just thought that God had been good to me … What I heard God tell me was, `Come sell for me. Come sell salvation.’”

“Artie is a gifted pastor indeed,” said the Rev. Chappell Temple, senior pastor of Christ United Methodist Church in Sugar Land, Texas. “And his approach offers a viable model for ministry to the whole community, including some whom we are rarely able to touch.”

While perhaps exceptional in his success, Cadar is representative of how The United Methodist Church increasingly depends on local pastors and other non-ordained local church leaders — as opposed to ordained elders — to reach Hispanics in the United States.

It’s a trend that some in the denomination have mixed feelings about, but the need for outreach is unquestioned.

Hispanics numbered about 54 million or 17 percent of the nation’s population in 2013, the U.S. Census Bureau says. The United Methodist Church had 75,196 Hispanic members that year, representing about 1 percent of U.S. membership, according to the General Council on Finance and Administration, the denomination’s finance agency.

The Census Bureau projects Hispanics will total 128.8 million or a third of the U.S. population by 2060. The rapid growth of a mission field lightly touched by The United Methodist Church has quickened interest by conferences in recruiting Hispanic local pastors, certified lay ministers and other non-ordained church leaders.

“That’s the only hope I see,” said the Rev. Martin Lee, congregational development and redevelopment director for the Northern Illinois Conference. “We don’t have the capacity to maintain a full-time ordained elder’s minimum salary package, especially starting a new faith community.”

The Northern Illinois Conference — located in and around Chicago, whose metro area has about 2 million Hispanics — has made a priority of Hispanic ministries.

That includes creating a leadership academy for Hispanic laity who feel a call to start new faith communities. Some go on to become local pastors.

In February, the conference celebrated the chartering of La Luz de Cristo, a church in Elgin, Illinois. It shares space with Epworth United Methodist Church and is led by the Rev. Ruben Rivera, a bivocational local pastor whose day job is in construction.

Rivera started by knocking on doors, inviting people to Bible studies in his home. At the chartering service, La Luz de Cristo had 146 members. Worship attendance averages about 170.

“What you need is passion and a calling, and God will do the rest,” Rivera said. 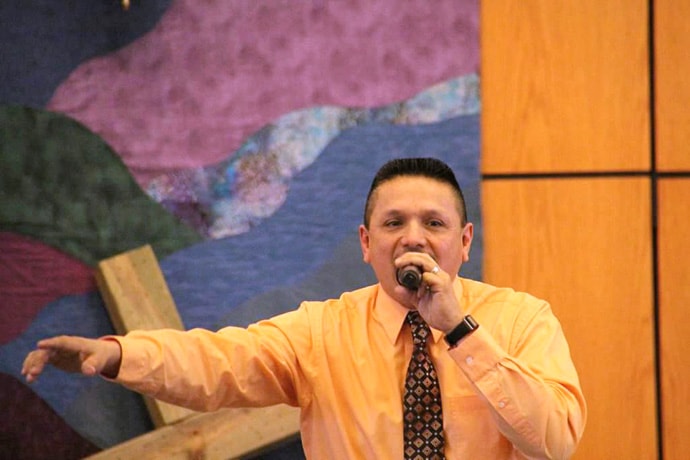 The Rev. Ruben Rivera is a part-time local pastor who founded and leads La Luz De Cristo (The Light of Christ), an Hispanic United Methodist Church in Elgin, Ill. The church was chartered in February with 146 members. Photo by Joyce Carrasco.

Of the roughly 25,000 pastors serving United Methodist churches in the United States as of summer 2015, just 494 were Hispanic, according to GCFA.

Full-time and part-time Hispanic local pastors together trailed Hispanic elders in number in 2010, but now comfortably outnumber them. (Deacons and supply pastors, another growth area in Hispanic ministry, bring the total clergy number to 494.) 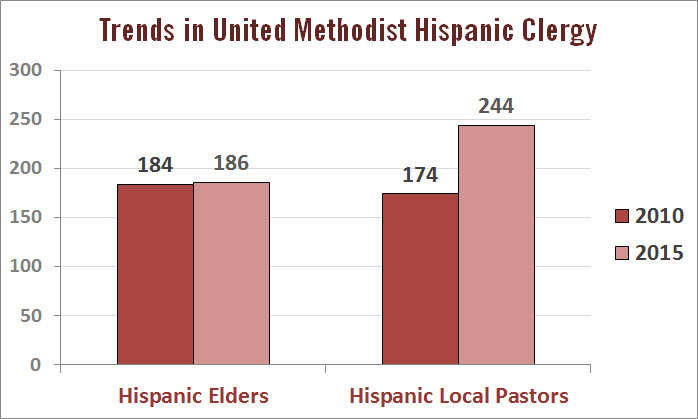 Saenz’s congregation worships in English, given that most of its members are third or fourth generation Hispanic Americans. It has gone from satellite campus to church plant to chartered church in nine years, and now averages about 360 in worship.

Saenz, 33, is the son of an elder, the Rev. Ruben Saenz Jr., who serves as executive director of the Rio Texas Conference’s Mission Vitality Center. The younger Saenz remembers when the family moved to Dallas so Ruben Saenz could attend Perkins School of Theology at Southern Methodist University.

But as a young man, Aaron chose the local pastor route.

“It was a way to jump into ministry, without having to go away for a while,” he said.

“What better place to raise them than out of our congregation,” Aaron Saenz said. 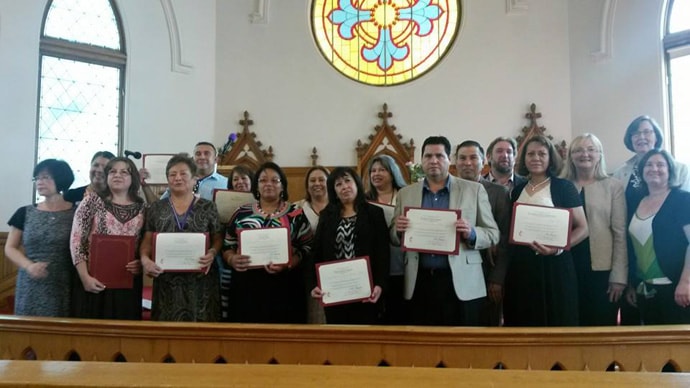 The Rocky Mountain Conference sponsored a Spanish-language local pastor licensing school in 2014, an effort to boost the conference’s ranks of Hispanic clergy. Photo courtesy of the Rev. Kay Palmer Marsh.

Last year, the Rocky Mountain Conference started a Spanish-language licensing school for local pastors. Getting a license is required for appointment, and for going on to the 20-class Course of Study that local pastors must pursue in their spare time.

Despite having a large Hispanic population, the Rocky Mountain Conference had just a couple of Hispanic local pastors and no active Hispanic elders serving the local church, according to the Rev. Kay Palmer Marsh, conference co-chair of Hispanic ministries.

“We needed a kick-start,” she said.

The licensing school drew seven people from the Rocky Mountain Conference and four from other conferences in the Western Jurisdiction. Two who attended have been appointed as local pastors in her conference, Palmer said.

The Oklahoma Conference, like Northern Illinois, has created an academy for cultivating Hispanic lay leaders, with the expectation that some will become local pastors. A handful of other conferences have some focused initiative to train Hispanic laity for church leadership, said the Rev. David Martinez, of the United Methodist Board of Higher Education and Ministry.

Martinez can rattle off the names of Hispanic local pastors around the country who he feels are doing an exceptional job, such as the Rev. Ruben Torres, associate pastor of Escondido United Methodist Church in Escondido, California.

Torres, a 55-year-old El Salvador native with a business background, leads the church’s Hispanic congregation. It began with a few people gathering in the chapel. Now about 70 people come to Thursday night Bible study, and about 140 come to a Sunday worship service.

“We don’t fit in the chapel anymore,” Torres said.

Under Cortes, a Puerto Rico native with a health care and business background, worship attendance has gone from 12 to 70 in three years. Cortes credits God, but also her decision for Ebenezer to have a youth soccer program. It’s brought in not only kids but also parents grateful for a wholesome activity in a tough neighborhood.

Thanks to soccer, Ebenezer is a youthful congregation, as well as a growing one.

“A year ago I was the oldest,” Cortes said. “Now there’s two that’s older than me.” 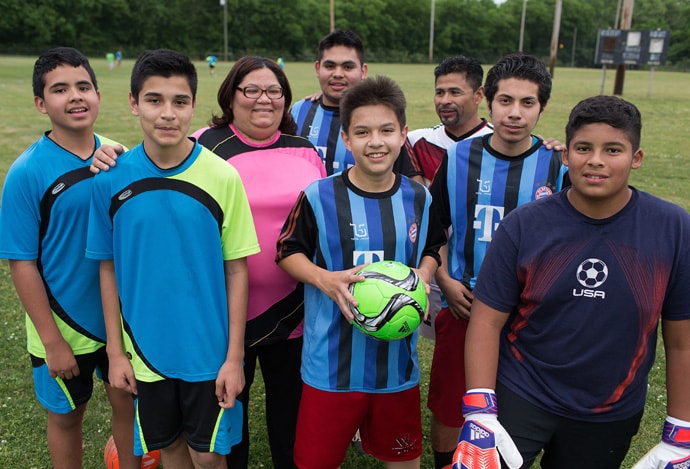 Getting to the table

He’d like to see such folks get financial support from the denomination to attend Course of Study before they get an appointment as local pastor — not after, as is now the case.

“We need to invest for the future in preparing leaders,” said Wingeirer-Rayo, who through this summer oversaw the Course of Study that meets at Perkins but just joined the faculty of Austin Presbyterian Theological Seminary.

Marigene Chamberlain, who leads Course of Study at Garrett-Evangelical, agrees.

“The (Hispanic) population continues to grow by birth and immigration,” she said. “We’re very short-sighted when we don’t invest.”

But Wingeirer-Rayo also sees potential problems in having far more Hispanic local pastors than Hispanic elders. He points out that local pastors tend to make less money. And while their political clout within annual conferences has grown, local pastors still can’t serve as General Conference or Jurisdictional Conference delegates, and they aren’t eligible to become district superintendents or bishops.

“It could create some unwelcome injustices as far as salaries and rights and privileges,” Wingeirer-Rayo said of an increasing reliance on Hispanic local pastors.

The Rev. Francisco Cañas, director of the denomination’s National Plan for Hispanic/ Latino Ministry, emphatically agrees. While applauding the work of Hispanic local pastors, he believes The United Methodist Church has used local pastor licensing to avoid the responsibility — and cost — of cultivating Hispanic ordained elders.

He notes that the scarcity of such elders is one reason the 2012 General Conference had only a handful of Hispanic delegates.

“In reality we are not sitting at the table with the rest of the people who can decide the future of our denomination,” he said.

Though he’s a local pastor, Artie Cadar agrees that The United Methodist Church needs to work harder to send Hispanics to seminary and have them as ordained elders.

He said he considered going the ordained elder route, and got accepted to two seminaries, though he lacked a year in finishing his undergraduate degree. But he said he heard from his District Committee on Ordained Ministry that he would have to finish college as well as seminary to have any chance of becoming an ordained elder.

“Quite honestly, I got discouraged and said, ‘I’m not doing this,’” Cadar recalled.

Cadar is still not ruling out going to seminary, but he’s so busy with ministry that more schooling will have to wait.

His superintendent in the Texas Conference South District, the Rev. Kip Gilts, said it was an easy call. He noted Cadar’s fluency in English and Spanish, ability to relate to people from a range of backgrounds, and business skills.

Something else came into play, Gilts said.

“He just has the leadership charisma that so many churches would love to have in their pastor.”