Epworth United Methodist Church, in Elgin, Ill., outside of Chicago, looks like a typical suburban church.

But on Sunday afternoons, the brick and glass vibrate to an infectious rhythm, as an eight-piece orchestra with drums, bongos and congas pumps out praise music with a Latin beat. Four music leaders sway, sing and pray in Spanish as angelic young ladies twirl banners triumphantly in front of the congregation. Some 130 parishioners are gathered this Sunday, praising Jesus with wide smiles on their faces, many with their hands raised to heaven, like Pastor Ruben Rivera.

This is La Luz de Cristo, a new Hispanic/Latino faith community established two years ago, and the atmosphere is heartfelt and spirit-filled.

Rivera, 47, a native of Mexico, was recruited to be a lay missioner by the Rev. Oscar Carrasco, the Elgin District superintendent, and the Rev. Mario Mayer, pastor of an established Hispanic/Latino congregation, El Mesias.

"We began talking to Rev. David Newhouse at Epworth about hosting us," Rivera said. "It began with me and my wife, Julissa, knocking on doors and starting Bible studies in homes, and, in four months when Pastor Newhouse said OK, we were ready to go with 12 people."

Now a leader of a faith community of 120 to 150 people on most Sundays, Rivera, who works asphalt and concrete construction by day, has seen God turn his life around.

"I was addicted to alcohol and drugs for 20 years," he recalled with tears filling his eyes. "I prayed one day for God to free me, and I pledged to serve him for the rest of my life. Now, I'm honoring that promise." 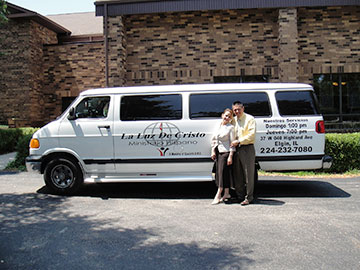 The Riveras pose with the church van.

"He used to disappear on weekends and spend all of our money," said Julissa Rivera, who was born in Nicaragua. "But when he came to the Lord and we started working with families, Ruben completely stopped a lifetime addiction, and I know only God can do that."

Rivera as a preacher is inspiring and charismatic. He doesn't use the Epworth United Methodist Church pulpit; a music stand at floor level on the front row is good enough. Full of energy and evangelical zeal, he moves about freely with Bible in hand, speaking loudly and clearly in Spanish to a congregation that hangs on to every word. Frequently they respond to his questions and exhortations with applause and "Amen and Aleluya."

This Sunday, his sermon includes the story of Abraham and Sarah and how God blessed their faith in old age with a child. "It's not our timing but God's timing," he proclaims. "Never lose faith!"

"There are so many Rubens out there to be reached," Rivera said later. "That's why I have the passion to serve the Lord, because there are people who used to hang around with me on the street who now know Jesus Christ and worship at this mission."

Rivera's training as a lay missioner is through the Conference Academy for Faith Community Development, an ongoing series of monthly meetings created by Carrasco, the district superintendent, and the Rev. J. Martin Lee, director of congregational development and redevelopment for the Northern Illinois Annual (regional) Conference.

The conference has started 30 new faith communities under Lee's leadership, and since 2003, when the academy first started, nine new Hispanic/Latino communities have been planted.

"In order to rekindle the movement of Methodism, we have to use indigenous lay leadership and not depend on ordained clergy anymore," Lee said. "What we are doing now is passion-driven, not money-driven, because subsidizing the salaries of pastors of small congregations is not working in the Hispanic community.

"Chicago has the third-largest population of Mexican-Americans in the world, so the opportunities for church growth are tremendous," he continued. "We can't wait for Hispanic leaders to go off to school and earn divinity degrees because the needs are now and there are so many eager lay missioners ready to go to work."

The academy has trained 100 Latinos and Latinas, 45 of whom are lay missioners, he said. "This is the future of our denomination," Lee said. "Some will go on to a course of study (curriculum for local pastors) and get a local pastor's license from the bishop. But the John Wesley movement was a lay movement, not just clergy, so we're recapturing a passion for the Methodist movement here in Chicago."

A thin man with a runner's build, Lee is constantly on the go, promoting faith community start-up and development. His entertaining and energetic training sessions are translated to a full conference room of Spanish-speaking participants.

Ruben Rivera is appreciative of the training.

"Learning how to make a church sign sounds pretty basic. But our first sign for La Luz de Cristo had too much information, and people fly by our church driving 50 miles per hour," he laughed. "So when I ordered the next sign, we got a bigger one with less information, and now we have eight or nine new families in the church just because of the new sign.

"More importantly, we learn how to start cell groups and what do in a cell to make it grow, so that's how we equip other people to do the same thing that I do with the same passion," he said. "But it's not about me&ellipsis; . It's about multiplying the congregation and reaching the whole neighborhood."

From 12 people to more than 120 in two years is effective multiplication as La Luz de Cristo is a light, not just to Elgin but to all of The United Methodist Church.

*Weeks is a writer and producer of independent television programming. He lives in Nashville, Tennessee.