Pam Thompson has some good advice for parents sending a child off to college for the first ... or the last time: "Share their excitement knowing they are about to have an enormous and exhilarating growth experience...and so are you!"

Thompson, from Brentwood, Tenn., is practically a pro when it comes to stuffing the trunk of a college-bound car with duffel bags, favorite pillows and an occasional stuffed animal. She's also experienced at using nooks and crannies for keepsakes and improvising when closet space is needed in dorm rooms. She's had a lot of practice waving goodbye and holding back tears when summer's end means she has to send her children down the road to college.

At the time this article was written in August, 2013, her 25-year-old son had conquered college and was now out in the real world. But she and her husband, Chip still had one more child to get out the door. Her 21-year-old daughter Shannon was beginning her senior year then at Birmingham Southern, a United Methodist-related college in Birmingham, Ala.

You'd think the couple would have this "letting go" thing down pat. In fact, you'd think that by now their worrying would wane, a quiet house would be welcome, and the freedom to go to a movie on a whim would outweigh the heartbreak of saying frequent see you laters. Well, sort of.

The stress of transitioning gets better, Thompson said, but not always easier.

"I still can't quite get used to seeing an empty chair at the dinner table," she said. "Our family unit of four changed, and although it's been a wonderful experience to see the kids you kissed goodbye return home with well-earned maturity and wisdom, the transition can be tough."

Be there 'as needed'

Jason Peevy, a counselor at Birmingham Southern, said the Thompsons' experience with letting go of their college-age kids is pretty much the norm. Some parents handle it better than others.

Some call too much. Many text too much. Some go as far as submitting dorm maintenance requests, setting up campus appointments for their students and making too-frequent visits to the school. 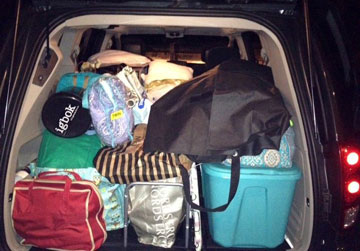 As a college senior this year at Birmingham Southern College, Shannon Thompson has learned how to expertly fit her home life into the back of the family van.
A web-only photo by Shannon Thompson.

"The parent needs to be there 'as needed,'" Peevy said. "It's OK to check in about a crisis situation, but students should be allowed and encouraged to work through their problems and make decisions on their own."

Peevy, the father of boys 3 and 5, says raising a college student is not very different from parenting young children.

"With my boys, I want to be there to warn them to stay in the shallow end of the pool, watch over them so they don't step in the middle of the street and catch them when they fall," he said. "Though the issues are different, parents of 18-year-olds feel much the same way."

Thompson said she knew that bad things would happen in her children's lives during the four years they were in school, but she worried about whether she had taught them everything they needed to know about surviving those bad things.

"I knew life would knock them down," she said. "But I wondered who would be there to pick them up when they experienced those big kicks in the gut."

One of the things she regrets the most is missing her children's important moments.

"You wish you could be there when they fall in love, get fired from a job or do badly on a test," she said. "You want to love them through their first broken heart or when they hear from home that the family dog has died. And even though you know other people will be supporting them, it may not be the way you would or with the same values you have."

According to Sherri Taylor, dean of students at Andrew College in Cuthbert Ga., parents have an underlying fear that their child may not need them anymore.

"The parents we are seeing today are very involved with their child, almost to the point of enmeshment," Taylor said.

"We call them 'helicopter parents' because they are always hovering around, trying to swoop down to rescue their children."

Don't overcommunicate. ... parents who call or text many times a day can do harm, including interrupting the student's "work day" and being a distraction.

Apparently, technology has increased that dependence. Taylor calls the cell phone an "umbilical cord" between a parent and child - keeping them in constant communication.

Each spring, United Methodist college chaplains and campus ministers begin reaching out to new students and their parents. The division of higher education of the United Methodist Board of Higher Education and Ministry connects parents and students to 520 collegiate ministries.

"Our chaplains and campus ministers are an important resource for new students," said Gerald D. Lord, associate general secretary of the higher education division. "We not only care about a student's academic and social growth, but the deepening of their own faith as well."

Andrew College offers four InSpire sessions each summer that allow students to take care of school business while moms and dads are prepared for the process of letting go. In those sessions, parents are encouraged to open up about their fears and given advice for discerning boundaries.

"They can be interested, but not intrusive," Taylor said.

Sara Hoover, director of counseling and health services at Birmingham Southern, estimates three-fourths of the college's parents take advantage of a transition program they call "From Home to the Hilltop."

In addition to tours, faculty meet-and-greets, a taste of residence-hall living and a peek into college life with a presentation called "A Day in the Life," Panther Pride parents are educated on topics like health and safety, budget management, career planning and more. There is even a course called "Letting Go: A Parent's Guide to Understanding the College Years."

"I always tell parents to give their son or daughter room to breathe." Hoover said. "Encourage children to be advocates for themselves by not always being the fixer."

"Parents' mixed feelings - sadness, confusion, fear will come in waves," she said. "And I can almost guarantee that sons or daughters are going through a tough time too. Your student may have been counting down the days until they leave, but when the time comes to go, they have many of the same feelings as you do."

Coming straight from one mother's mouth, Pam Thompson said, "Though you have a little hole in your heart, just remember your child will return to you."

Advice from parent and student

Keep in touch creatively. They will appreciate handwritten letters, care packages and photos from home.

*Passi-Klaus is a freelance writer for United Methodist Communications. This article was originally published August 22, 2013.