Never have the words “Let it be” sounded so sweet — or so important.

That is how Mary responded after the angel Gabriel told the virgin that, through the Holy Spirit, she would conceive the Son of the Most High.

“I am the Lord’s servant,” she says, according to the Gospel of Luke. “Let it be with me just as you have said.”

Countless paintings and stained-glass windows have sought to capture this moment. They depict a beautiful young woman faithfully accepting the divine birth announcement.

However, what Christians recognize as Good News comes out of a very harsh and at-times ugly reality — one that typically doesn’t get the stained-glass treatment.

With an out-of-wedlock pregnancy, “she definitely would have been in jeopardy,” said Brittany E. Wilson, a John Wesley Fellow and New Testament professor at United Methodist Duke Divinity School.

“Mary was living very much in a culture of honor and shame.”

Not only did she risk her relationship with Joseph and the economic stability she only could get through marriage; she may have risked her life as well. Yet, she confronted all this danger for God.

As the Gospels show, Mary did far more than sit silently in a peaceful Nativity scene. She defied the social expectations of her day. 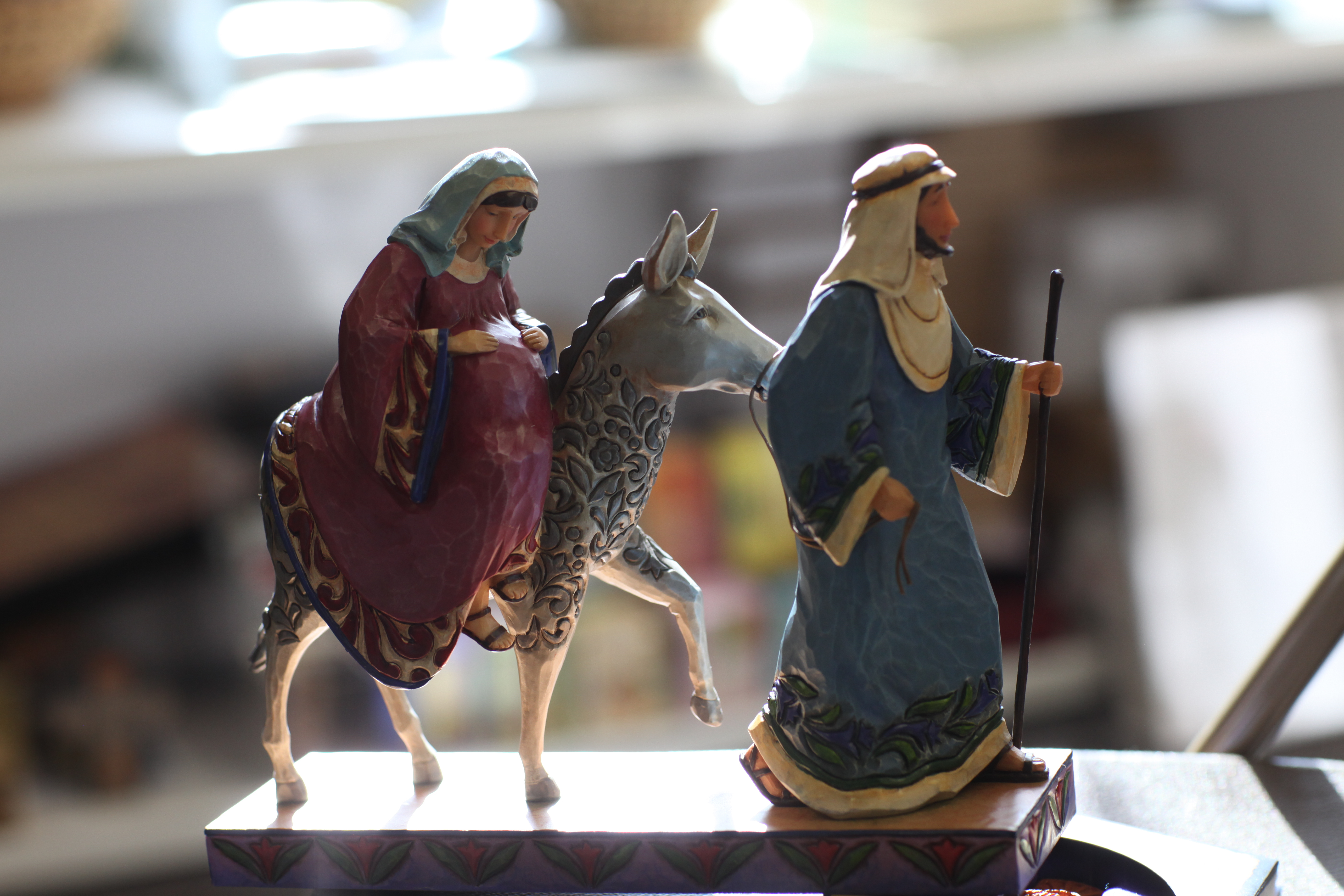 Mary’s pregnancy was not an easy one but one she accepted with trust in God. Photo by Kathleen Barry, United Methodist Communications.

At first glance, Mary would seem an unlikely candidate to bear the King of Kings.

She was no aristocrat but a young Jewish woman in what was then Roman-occupied Galilee. On top of that, she wasn’t from a major urban center but from Nazareth, which Wilson said was a “Podunk, blink-and-you-miss-it kind of town.”

Wilson likened Nazareth’s backwater reputation to what some people think of Appalachia. Even by Mary’s day, the saying that “nothing good could come out of Nazareth” was already a cliché.

The scholar also notes that Mary was undoubtedly poor. In Luke, Mary refers to herself as someone of low status. Luke 2:24 also notes that when Mary and Joseph present the baby Jesus at the temple, she sacrifices a pair of turtledoves or pigeons. Under Levitican law, that meant Mary didn’t have the money to sacrifice a sheep.

Matthew’s Gospel hints at the kind of trouble a mysterious pregnancy would mean for a woman in Mary’s tenuous circumstances. In Matthew’s account, Joseph considers breaking off the couple’s betrothal, until an angel visits him in a dream.

What the Gospel doesn’t say explicitly is that Joseph had the option of pressing charges against Mary before the local religious elders. Such a move could have put her at the same risk of stoning faced by the adulterous woman Jesus later encounters.

Bottom line, Wilson said, Mary was in a precarious situation.

Despite all this, Mary receives Gabriel’s announcement as a sign of God’s favor. In her own way, she doesn’t take the news lying down. Instead, according to Luke, she immediately hurries through the rugged Judean hill country to share her joy with her relative Elizabeth, who by then is six months pregnant.

Wilson contrasts Mary’s trust in God to the skepticism the priest Zechariah, her in-law, expresses when Gabriel announces that the long-barren Elizabeth will bear John the Baptist. Wilson has written about that contrast in her book “Unmanly Men: Refigurations of Masculinity in Luke-Acts.”

“Mary demonstrates an open inquisitiveness; her faith is a process that responds to the divine,” Wilson told United Methodist News Service.

“And the fact that she believes Gabriel’s words, whereas Zechariah does not, indicates an overturning of hierarchal gender structures as well.”

“He has lifted up the lowly”

Luke’s account of Christ’s birth and ministry continues to emphasize such social reversals, with Mary leading the way.

When Elizabeth hails Mary as blessed “above all women,” Mary responds with not just praise for God, but also a description of the kind of change God brings.

“He has pulled the powerful down from their thrones and lifted up the lowly,” the expectant Mary proclaims. “He has filled the hungry with good things and sent the rich away empty-handed.”

The Song of Mary — also called the Magnificat, for Mary’s declaration that her soul “magnifies the Lord” — is not your typical Christmas carol.

The Magnificat shows Mary to be a prophet, said the Rev. Shively Smith, a New Testament professor at United Methodist Wesley Theological Seminary and an African Methodist Episcopal elder.

She notes that the writer of Luke and Acts identifies Mary in a slightly different way than the other Gospel writers or even other Marys in the text. Instead of spelling her name the Greek way as Maria, Luke identifies Jesus’ mother by the Jewish spelling Mariam.

Smith said Luke’s original audience would have connected that spelling with an earlier heroine in the Torah — the prophet Miriam. In Exodus, Moses’ sister and protector has her own famous song celebrating God’s victory over earthly powers.

At a time when many viewed Caesar Augustus as the exemplar of God’s favor and even as a god himself, Mary is saying the true God has other ideas.

“What sticks out for me is that revolutionary notion that God sides with the suffering and vulnerable,” he said. “That’s what you see in this movement of Jesus.”

"Mary treasured up all these things”

Jesus identifies his family as those who follow him rather than his blood relations. However, Mary proves to be a true disciple and member of Christ’s adopted family.

According to the Gospel of John, she instigated Jesus’ first miracle of turning water into wine. John also says she was one of the women at Jesus’ crucifixion. The Acts of the Apostles places Mary alongside the other disciples after Jesus’ ascension to heaven.

Carol Barton, an executive with United Methodist Women, noted that Mary modeled the kind of discipleship many Christians, including UMW members, try to follow.

“Mary was faithful. Mary also understood power, as is clear in the Magnificat. She was also resourceful,” Barton said. She noted that Mary helped find the stable and turned a feeding trough into a newborn’s bed. She also joined Joseph in fleeing with Jesus to Egypt, away from a murderous Herod.

Mary is more than a role model; her story is a call to help the marginalized today, said Susan Burton. She oversees advocacy for women and children at the United Methodist Board of Church and Society.

“Mary was vulnerable because she was not valued by society,” Burton said. That’s a problem faced by too many women and children today.

Women can still face abandonment or worse because of rape or an unexpected pregnancy. Even now, she said, simply giving birth can put a woman’s life in danger.

Burton and other United Methodists are working to improve life expectancy by helping women space out their pregnancies and get the prenatal care they need. She also is working with groups to prevent sexual violence.

“Mary is everywhere,” she said. “Our love for her, our love for Jesus and our love for God mandates that we stand up for all the Marys in the world.”

This story was originally published December 16, 2015.