One of the most celebrated and influential United Methodists is lending his name to an institute at Vanderbilt University that will promote and study nonviolence.

The Rev. James Lawson, who has been called the “architect of the civil rights movement,” has given his blessing to the James Lawson Institute for the Research and Study of Nonviolent Movements at Vanderbilt University.

Lawson, 93, told United Methodist News that he will act as “spiritual adviser” to the institute, along with his ongoing work advising, teaching and writing.

Lawson released a book in February on how to use nonviolent protest to cause change, “Revolutionary Nonviolence: Organizing for Freedom.” He is starting work on a memoir, which will be published by Random House in 2023 if all goes as planned.

“Dr. Martin Luther King Jr. once referred to the Rev. Lawson as the leading theorist and strategist of nonviolence in the world,” said Daniel Diermeier, chancellor of Vanderbilt, during an April 7 event to introduce and celebrate the new institute. “Without Rev. Lawson's strategic ingenuity, spiritual guidance and moral example, the civil rights movement as we know it would not have existed.”

The institute will “work toward a world with no violence,” said Phillis Isabella Sheppard, a professor of religion, psychology and culture at Vanderbilt who was tapped as the institute’s first director.

“This is either a grandiose fantasy to believe that such a world is possible, or it expresses the most profound dimension to the work of this institute,” she said. “I think it is the latter.”

The Rev. James Lawson speaks about nonviolence at First Baptist Church in Montgomery, Ala., the site of a 1961 confrontation between Freedom Riders and an angry mob. The visit to the church was part of a 2009 congressional civil rights pilgrimage to Alabama. Lawson was one of several United Methodist leaders participating in the trip sponsored by the Faith and Politics Institute. File photo by Kathy L. Gilbert, UM News.

Among Lawson’s goals for the institute are to:

“Since 2000, I have done formal workshops on teaching nonviolence to activists,” Lawson said. “So JLI is an effort to imitate the work I did across the South in helping to teach mostly Black folk how you can desegregate and help people — Black and white alike — to change, be converted out of racism into a desegregated society.”

The Nashville model of nonviolence developed by Lawson, featuring sit-ins at downtown lunch counters, became a model for other cities in the 1960s. He had traveled to India in 1953 and worked as a youth minister for two years while studying Gandhian philosophy.

“JLI is devoted to the notion of reaching into the community … to help people see that there is a science of nonviolence that is as effective as the science of electricity,” Lawson said. “That’s what Gandhi said. If you follow certain principles, you will find out that the consequences will be as predictable as the laws that surround ether and electricity. And that’s my thesis.”

After returning from India, Lawson was recruited to train and advise civil rights activists.

“He had a fateful meeting with Dr. Martin Luther King at Oberlin College,” Diermeier said. “At that meeting, Dr. King urged the Rev. Lawson to participate in the urgent struggle in the American South.”

While studying at Vanderbilt Divinity School, Lawson conducted workshops where he taught college students the principles of nonviolent protest. John Lewis, who would go on to serve more than 30 years in Congress, was one of his students. 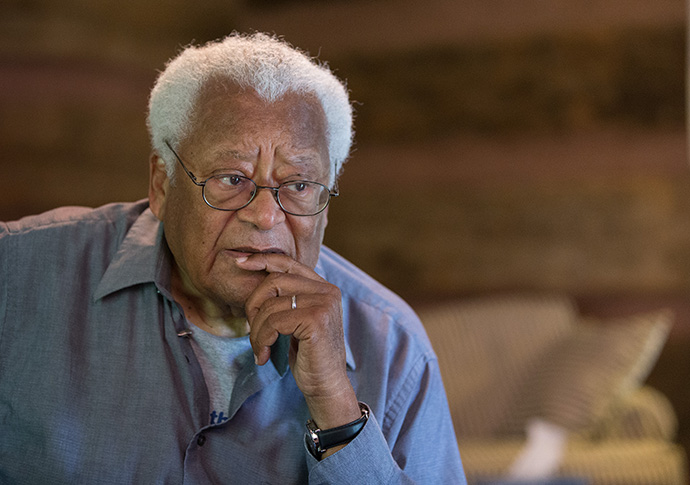 The Rev. James Lawson talks about Black Lives Matter and the civil rights movement during a break from teaching at the Children’s Defense Fund’s Proctor Institute in Clinton, Tenn., in 2016. File photo by Mike DuBose, UM News.

Lawson was an adviser for the Freedom Riders who were beaten while challenging segregation on interstate buses and bus terminals in the South. News footage of the violence caused a turning point in the civil rights movement. He also advised the Little Rock Nine, students who desegregated Central High School in Little Rock, Arkansas, in 1957, following the Brown v. Board of Education Supreme Court ruling that segregation in public schools was unconstitutional.

Lawson invited King to assist with a 1968 sanitation workers’ strike in Memphis, Tennessee, where King was assassinated.

The Rev. James Lawson said the violent Jan. 6, 2021, insurrection at the U.S. Capitol aimed at preventing President Biden from taking office was a stark contrast to Black Lives Matter protests, which were overwhelmingly peaceful.

“Right now, we’ve got a very violent political situation,” he said. “It has to be deescalated.”

“In 2020, the United States had the largest nonviolent campaign in the history of our nation, from May to August,” Lawson said. “(There were) demonstrations in every state (and) more than 15 to 25 million people participated … in more than 2,500 locations.”

The protests were “heavily mixed” with white and Black participants of all ages, he said. “The violence came from the police and the looters and the anarchists and the Antifa people,” Lawson said.

Despite the peaceful nature of the majority of Black Lives Matter demonstrations, they were demonized by some.

“They say it was very violent,” Lawson said. “Well, that’s a lie. That’s one of the lies like racism.”

He considers Black Lives Matter protesters “the heirs of the struggle.”

He finished his theology degree at United Methodist-related Boston University, but the Vanderbilt expulsion was a national news story and some students and faculty left the Nashville university because of it. Vanderbilt and Lawson eventually reconciled, and he has since returned to teach there and selected it as a repository for his papers.

From 1974 to 1999, Lawson pastored Holman United Methodist Church in Los Angeles, where he is now pastor emeritus. He continued after retirement from the church to lecture and train students in nonviolence. The January 2021 insurrection at the U.S. Capitol illustrated the continuing need for it, he said.

“I maintain that nonviolent thinking and history and language is what a democratic society must have,” Lawson said. “If you don’t offer a nonviolent way of making changes, then you get Jan. 6.”

Recruiting youth to the nonviolent philosophy will be a priority at JLI, Sheppard said. Two groups, one for 13- to 17-year-olds and another for college students, will be formed. The younger group, called the youth council, will be comprised of students who want to learn about nonviolence. They will work on programming to attract their peers.

Lawson maintains that a world of nonviolence is not a pipe dream, but an achievable goal.

“One of the things that Gandhi taught me, by my study and research, is that nonviolent power is the creative power of life itself and the power that produced our universe and human life,” he said.

“If human beings could learn to tap and use that power, instead of the many powers that do exist, human beings will create a world that's beyond our imagination because they will be tapping the energy that created us, whether they call that God or just the energy of the universe.”