While many Korean clergy members welcomed the adoption of the Traditional Plan at the 2019 General Conference, others in The United Methodist Church’s Korean community expressed their disappointment and concerns with the plan.

“I cannot tell you I am happy with what happened at General Conference,” said Bishop Hee-Soo Jung, one of three Korean episcopal leaders.

On the final day of the Feb. 23-26 legislative assembly in St. Louis, delegates passed the Traditional Plan by a vote of 438 to 384. The plan reinforces the denomination’s prohibitions against same-sex unions and “self-avowed practicing” gay clergy. 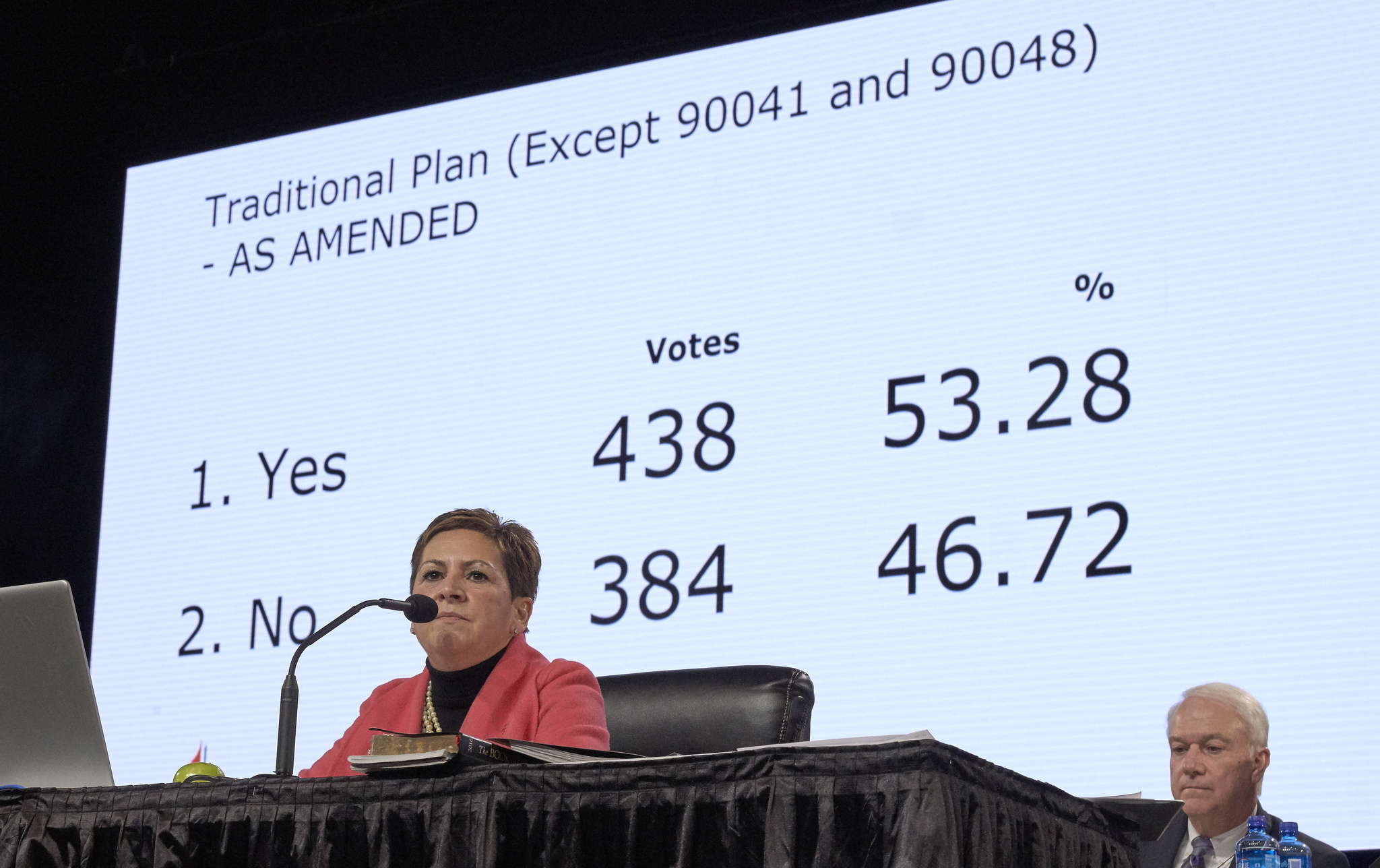 Bishop Cynthia Fierro Harvey observes the results from a Feb. 26 vote for the Traditional Plan, which affirms the church’s current bans on ordaining LGBTQ clergy and officiating at or hosting same-sex weddings. Photo by Paul Jeffrey, UMNS.
While Jung, who leads the Wisconsin Area, expressed his disappointment over the outcome of GC2019, he said it would be too easy to say that the church had failed.

“The concerns of our central conferences were voiced and challenged, yet there was strength in this area as well,” he said. “Our LGBTQI+ brothers and sisters felt judged, disrespected and attacked, yet parts of the community rallied around them with incredible love and compassion.”

The Rev. Christina Baek of First United Methodist Church in Clinton, Iowa, and a member of the Wesleyan Covenant Association, an unofficial advocacy group that championed the Traditional Plan, said she welcomed the outcome. However, she expressed concern for some young members of her church who were saddened by the decision.

“I read the pastoral letter from Bishop (Kenneth) Carter during our Sunday worship service,” she said.

The Rev. Grace Oh of Englewood-Rust United Methodist Church has supported the Traditional Plan, but not schism.

“I feel relieved after the General Conference adopted the Traditional Plan," she said. "Now I am going to focus on what I have been doing as a pastor. I will love my church and people of God.”

The Korean Association of The United Methodist Church organized a special task force to prepare a response if the One Church Plan passed. 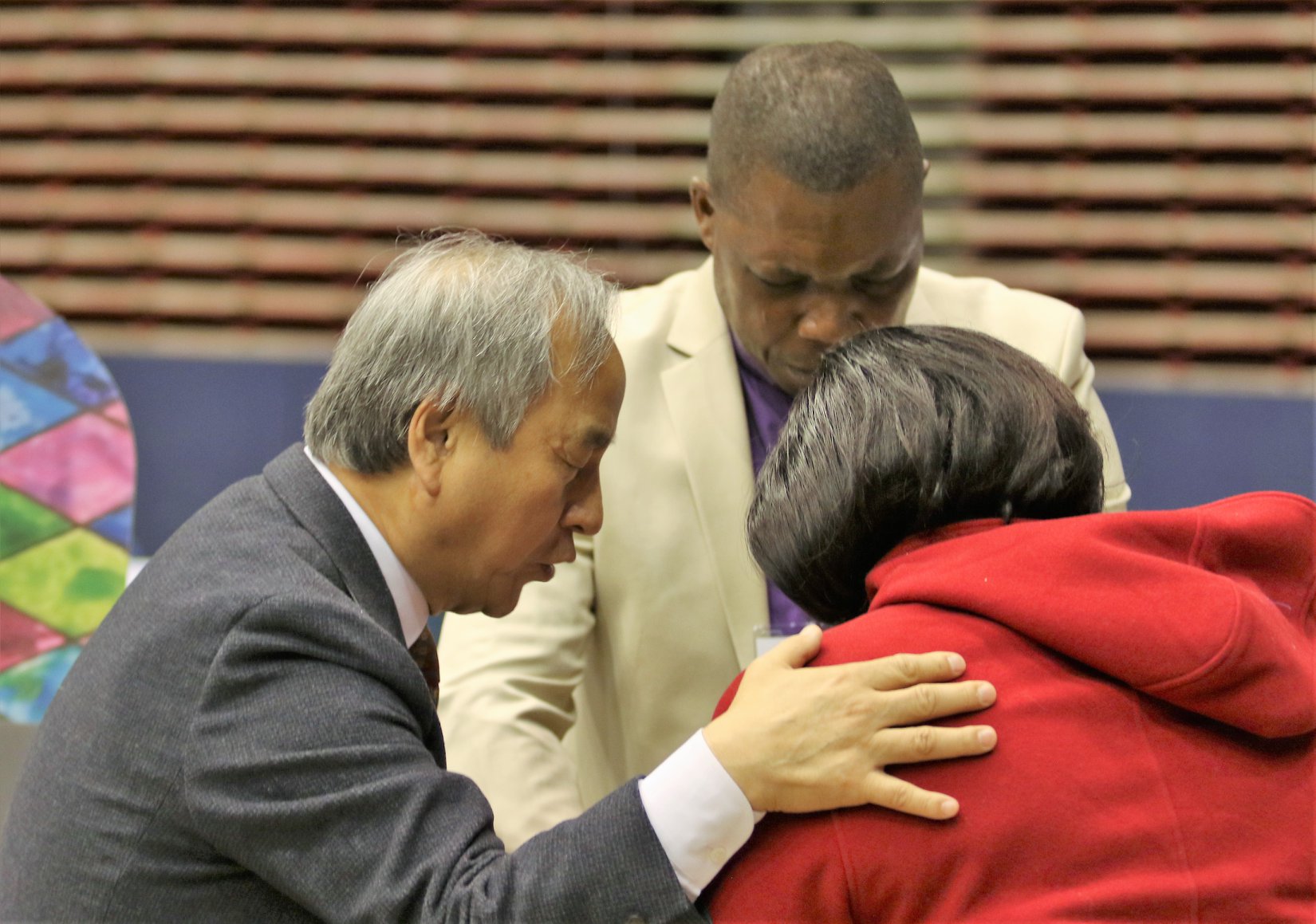 Bishop Hee-Soo Jung, left, prays with delegates during a Day of Prayer on the first day of General Conference 2019 in St. Louis. Photo by the Rev. Thomas Kim, UMNS.
The Rev. TJ Kim of Salem Korean United Methodist Church in Schaumburg, Illinois, chairs the task force. He had raised concerns about the One Church Plan, which would have allowed U.S. churches and conferences flexibility to decide on same-sex unions and ordination of gay clergy.

“I anticipated that the impasse of the denomination would be resolved by the General Conference,” he said. “But I think that the future of The United Methodist Church became uncertain, more complicated.”

On the final day of the special session, delegates requested a declaratory decision by the Judicial Council on the constitutionality of the Traditional Plan. The denomination’s top court had earlier declared parts of the plan unconstitutional. The council will address the request at its next scheduled meeting April 23-25 in Evanston, Illinois.

The Rev. Nak-In Kim, one of the Korean Association task force members, said he and his congregation were pleased with the passage of the Traditional Plan, even though he has some concerns about it.

“One of the main reasons we, Korean pastors and churches, supported the Traditional Plan was to maintain the authority of the Bible in the Book of Discipline. We did not approach it as a social and ethical issue. We believed that the biblical interpretation is more important than a social and ethical one.

“But, now,” he said, “we worry about their human rights and pain and suffering of LGBTQA+ brothers and sisters because the plan does not have any means to embrace them with pastoral mind and heart.”

The Rev. Hannah Hwa-Young Chong of Community United Methodist Church in Naperville, Illinois, expressed her disappointment and sadness with the results.

“The decision made at the special General Conference was one of the most harmful acts I have seen in church history,” she said. “With deep pain, I recognize that our global Methodist church has decided to choose hatred over love, bigotry over faith, and self-righteousness over Jesus."

The Rev. Hannah Ka of Korean Hope United Methodist Church in San Diego, a supporter of the One Church Plan, said her congregation will continue to welcome everyone.

“I think homosexuality may be a serious issue for the older generation, but not for the young generation,” she added. “There is obviously a generational cultural gap between them.” 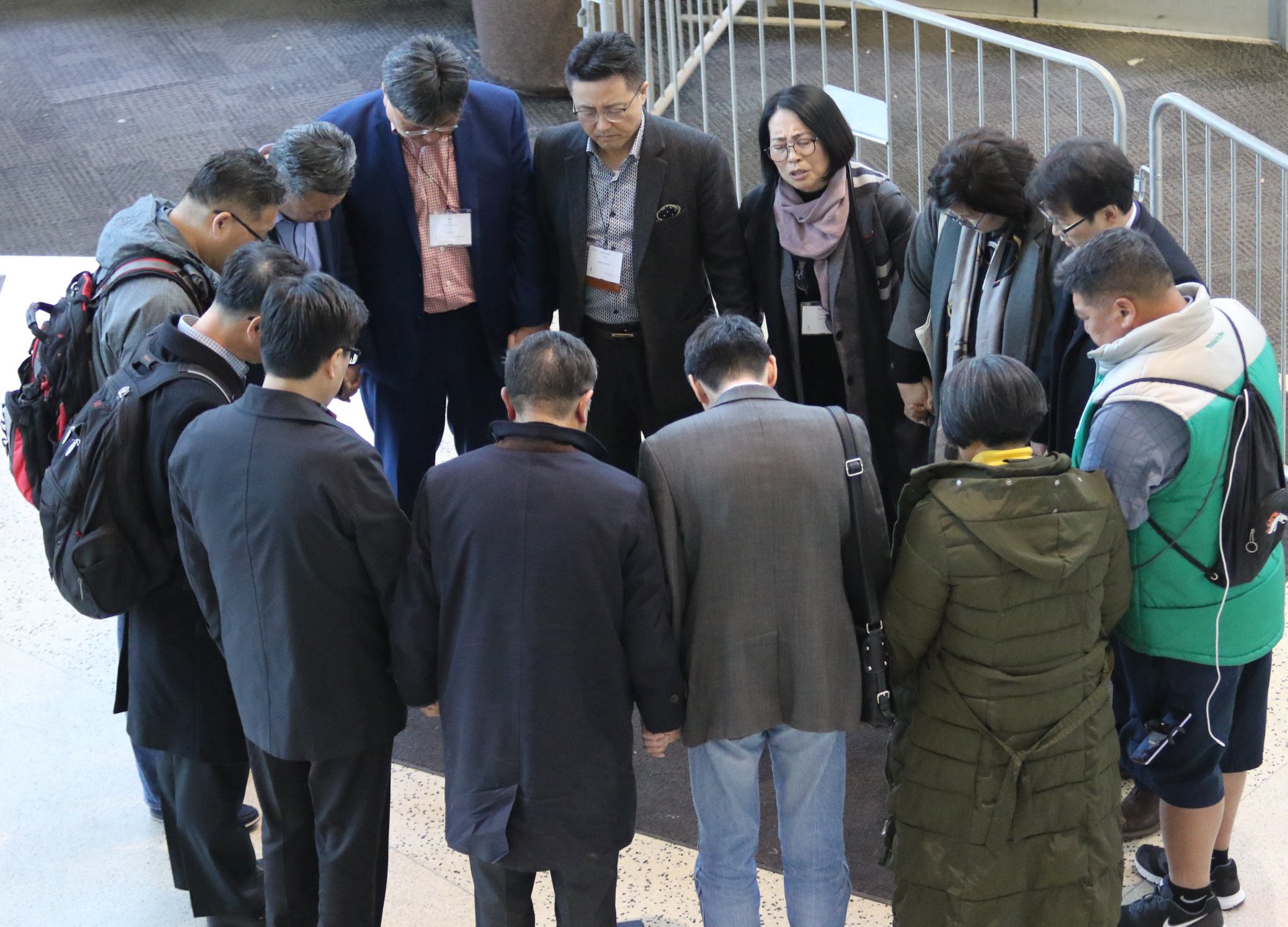 Korean United Methodists gather in prayer during the 2019 General Conference in St. Louis. Photo by the Rev. Thomas Kim, UMNS.
While Korean churches mostly support the Traditional Plan and welcomed the 2019 General Conference vote, some pastors worry about the direction the denomination might take, said the Rev. Sungho Chung of First Korean United Methodist Church in Washington.

“Korean pastors are concerned more with their churches than about their theology,” he said.

“But I am afraid that the conservatism of the church may go in an anti-immigrant and anti-minority direction,” he said.

He thought the Traditional Plan focused too much on reinforcing punishment as opposed to embracing fellow clergy.

“The adoption of the Traditional Plan might be good for the Korean churches,” he said. “But I cannot hide my worries that we do not have any plan to support and embrace LGBTQIA+ people in the church.

“There is a need for civil disobedience which allows diversity in faith and theology. The Traditional Plan bans that as well,” he said.

For further perspective on Korean United Methodists' views regarding these issues, read:
The Rev. Young Ho Chun, a retired professor from Saint Paul School of Theology near Kansas City, acknowledged that he was deeply disappointed the special General Conference, but noted the difficult cultural and legal difficulties for some proponents of the Traditional Plan.

“Think for a moment about the life situation of those African and Northern Eurasian brothers and sisters who had to vote the way the ‘traditionalists’ did because their nations have either criminalized LGBTQIA+ identities or even imposed a death sentence,” he said. “Think also about those in Northern Eurasia whose chance for mission and evangelism are very little if the One Church Plan passes, and for the Filipinos who have similar cultural constrictions.”

Looking forward, the Rev. Young Bong Kim of Korean United Methodist Church of Koinonia in Washington shared a part of a prayer written by one of his church members.

“For those who are happy because of the decision made, Lord, let them know humility. For those who did not get what they prayed for, and are now crying, Lord, let their pain be ours as well. Even though we have different views, we do not forget that we are brothers and sisters in God and one family.”

Kim is the Korean/Asian News Director for UMNS. Contact him at 615-742-5470 or email [email protected]. To read more United Methodist news, subscribe to the free Daily or Weekly Digests.

In the first in-person annual gathering of the Association of Korean Churches in The United Methodist Church, several panelists questioned whether the church’s membership decline could be attributed to a lack of spiritual renewal and its long-standing conflict over homosexuality.
General Church

The Global Methodist Church, a theologically conservative breakaway denomination, has set May 1 as its official start date. However, it will take time for any potential separations from The United Methodist Church to take place.
Local Church