There are many ways to observe the weekend as we pause to remember what would have been the 84th birthday of the Rev. Martin Luther King Jr.

Those foot soldiers of my generation of the Civil Rights Movement will remember marching with him from Selma to Montgomery. In August of this year, we will acknowledge the 50th anniversary of the March on Washington when Dr. King gave his "I Have a Dream" speech.

This month, The United Methodist Church will join in observing "America's Sunday Supper" on the MLK weekend with an emphasis on service to veterans and their families.

One of the great failings of our nation, particularly those of us who are antiwar, is to ignore, or even disrespect, the women and men who have worn, or who wear the uniforms of the military and their families. When we do this, our antiwar rhetoric and actions become less significant because of our insensitivity to the persons who represent all of us as they serve in the military.

The intentionality of service to veterans on the MLK weekend is a wonderful corrective to our sometimes disrespect of veterans.

One of the challenges in responding to the impact and significant contribution Martin Luther King made to all of us is that at times, we end up in debates and disagreements about appropriate and inappropriate ways to honor his life and legacy.

During his life, there were those active in the Civil Rights Movement and those not active, who disagreed with his belief in and commitment to nonviolence. They felt that the violence imposed upon blacks and those who were not black who supported the aims of "The Movement" should be met with counterviolence. Martin Luther King did not agree. He believed a commitment to nonviolence was essential to the achievement of a "Beloved Community," a world community that respects the value of all persons; those in agreement with the aims of the Civil Rights Movement, and those who did not or do not agree. 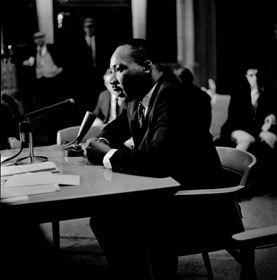 The Rev. Martin Luther King Jr. speaks at an April 4, 1967, news conference at The Riverside Church in New York.

The Parable of Matthew 20:1-16 has some relevance for those who believe protest is more reflective of Martin Luther King's life than is service. In the parable, those who arrived early to work were dismayed when at the end of the day, those who were not early received an amount equal to that received by the early comers.One of the lessons of the parable is that it is important that one decides to work, whether that decision is expressed in arriving early or later in the day.

It is no longer possible to walk with Dr. King in marches to protest injustice because he is no longer alive and there is no active Civil Rights Movement. I believe that those who are engaged in service to others in the name and spirit of Martin Luther King Jr. are in their service, "marching" in and with the spirit of the "Drum Major for Justice." If we engage in acts of kindness in the name of Dr. King, we cannot help but develop deeper understandings of what his life and legacy means to all of us.

More than ever before, we are called to understand what he meant when he said, "Injustice anywhere is a threat to justice everywhere."

*Caldwell is a retired elder and member of the Rocky Mountain Annual (regional) Conference. A member of the board of the African-American Methodist Heritage Center, he lives in Asbury Park, N.J.