At a time when clean water is scarce in many parts of the world, The United Methodist Church in Zimbabwe is keeping the precious liquid flowing at its three missions.

“Water is life and everyone needs it,” said the Rev. Alan Masimba Gurupira, administrative assistant to Bishop Eben K. Nhiwatiwa. “Humans and all programs of agriculture are pinned on the availability of adequate water supply.”

He said September through November were the hottest months of the year, drying up water bodies. “The economic meltdown worsened the situation,” he said, noting that the country has long faced food insecurity due to drought.

The World Food Program reported in April that the number of people facing acute food insecurity could rise to 265 million in 2020 as a result of the economic impact of COVID-19, nearly double the number in 2019. That number includes 7.7 million people in Zimbabwe, half of the country’s population.

Access to clean, safe water has been even more important during the global pandemic, when handwashing is key to stopping the spread of the virus.

Zimbabwe Volunteers in Mission and the Nyadire Connection have helped ease some of the water issues at United Methodist Hanwa, Dindi and Nyadire missions.

The availability of water at the missions enhances food security, said Gurupira, noting that the sale of farm produce allows the mission and community to be self-sustaining.

Charles Eric Moore Jr., a team leader for Zimbabwe Volunteers in Mission, said that this year, the group sourced funds to install a solar-powered well pump on two boreholes at Hanwa and one at Dindi.

Give to Global Ministries water, sanitation and hygiene programs through Advance # 3020600.

Learn more or donate online to the Zimbabwe Volunteers in Mission.

Learn more or donate online to the Nyadire Connection

Normally in Zimbabwe, boreholes are electric-powered, but that has become a challenge due to load sharing and high tariffs.

“Electricity has become much more expensive and even more unreliable,” Moore said. “The ability to continue to provide a sustainable water supply to the missions became a top priority for us.”

Moore said the solar-powered boreholes provide enough water for the missions and neighboring families, as well as Hanwa’s enhanced irrigation system and an emerging agricultural project.

“The agriculture initiative, which is processing surplus for the market, will clear the way for long-term sustainability of Hanwa Mission,” he said.

The Rev. Future Sibanda, pastor-in-charge and chaplain for Hanwa Mission United Methodist Church, said installing the solar system at the boreholes in June — at  a cost of $1,000 per borehole — has been a savior to the institution and surrounding communities.

“During this COVID-19 pandemic, the villagers never stopped coming to collect water. They would come with ox-drawn scotch carts to collect the precious resource,” he said.

“The high-capacity boreholes (which provide 30,000 to 45,000 liters per day) are servicing 300 households with a population of more than 2,000 people from nearby villages and farms. This is in addition to 900 students from Hanwa’s primary and secondary schools and 22 teachers and their families.”

Sibanda, who spearheaded the agriculture initiative, said the boreholes are sustaining year-round irrigated crops on a one-hectare plot at the mission.

Gift Machanzi, headmaster at Hanwa Primary School, said the solar-powered boreholes have relieved the demand for water for the school and the surrounding communities.

“The school is able to have adequate water for its construction and agriculture project. COVID-19 etiquette demands personal hygiene, and the availability of running water from the water taps makes our lives easier in addressing the needs of the children,” Machanzi said.

Muchavanzei Changwesha, a village head in the surrounding Flint Farm community, said that about 80 people in 15 households in her community are benefiting from the borehole.

“Hanwa played a pivotal role in saving lives by enabling people to access clean water, thereby protecting them against water-borne diseases,” she said. 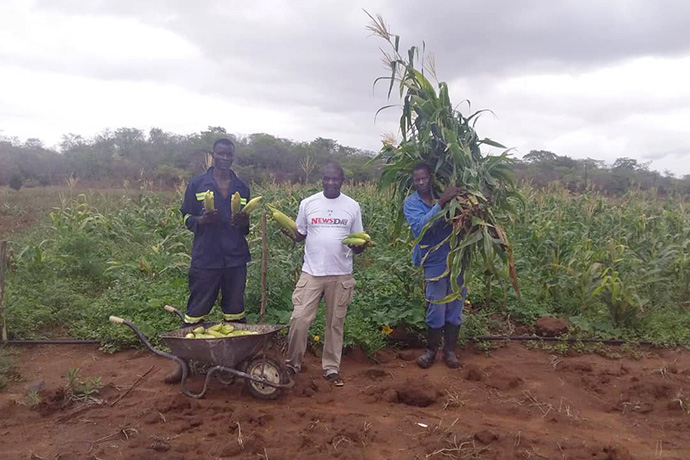 Staff from the Home of Hope Orphanage at the United Methodist Nyadire Mission in Zimbabwe harvest corn to feed the children living there. When the well serving the orphanage ran dry, the Nyadire Connection drilled a new well that has extra capacity for some irrigation. From left are: Tarasana Nyazvache, Emmanuel Chiimba and Justice Chimbwanda. Photo by Kudzai Chingwe, UM News.

Reevson Muchemwa, a villager who lives 5 kilometers (about 3 miles) from the mission, said Hanwa is the only place nearby with safe water.

“I use a scotch cart (because of the distance) to fetch water to drink and irrigate the few beds of vegetables in my garden to avert hunger. We do not have enough food. The drying up of water bodies is worsening the situation,” Muchemwa said.

“The economy is very bad especially to us rural folks. We cannot afford to buy the basic needs, hence we are very grateful to Hanwa for allowing us to access water.”

The Rev. Solomon Mugadza, pastor-in-charge at Dindi United Methodist Church, said that the solar-powered borehole has been very helpful to the mission’s clinic.

“The borehole has helped the patients at the clinic and staff members, especially during the summer season when the water table had depleted. However, the quantity is not enough to supply to the schools and the communities,” he said.

In October, the Nyadire Connection took action when the Home of Hope orphanage at Nyadire Mission lost its water supply. The all-volunteer group founded by individuals from a network of United Methodist churches in Pittsburgh has been working with the mission since 2006 on water development, said Drew Harvey, Nyadire Connection chairperson.

The nearby Nyadire River had been very low, depleting the mission’s underground water supply.

“Because of the continuing drought situation, the borehole that supplies water to the Home of Hope orphanage had gone dry. (The Nyadire Connection) supported quickly drilling a second borehole which went to 92 meters, but water production was still limited — only enough for the house without much for irrigation,” Harvey said.

Read more about The United Methodist Church’s efforts to provide clean water in rural Africa in "Water is Life," a photo essay by staff photographer Mike DuBose, with reporting by Kathy L. Gilbert.

The Rev. Lancelot Mukundu, mission station chairperson, said the whole mission relies o the borehole when electricity is out, not just the Home of Hope orphanage.

Emmanuel Chiimba, administrator for the orphanage, said the home has 18 children and 10 staff, along with their families, who directly benefit.

“Before the new borehole, most boreholes had low capacity and could not meet the demand for both domestic and crop irrigation water,” Chiimba said.

The home has more than 50 hectares and runs different agricultural projects — livestock, crop and horticulture production— to enhance food security.

“From the harvests, we supply the kitchen and sell the surplus,” Chiimba said. “Currently, we have a variety of vegetables, watermelons and green mealies (corn) ready for consumption due to the borehole water. Generally, green mealies and watermelons are off-season, but we have them because we irrigated using water from the borehole.”

The Norway-Zimbabwe Community Development Program, through its Chabadza initiative, also supported the church’s water efforts this year, drilling a $4,000 borehole in Matsviru Village in Hurungwe, about 250 kilometers from Harare.

The Rev. Musafare Mususa, director for Chabadza program said, the village head applied for assistance in 2017.

Harare West District superintendent the Rev. Phillip Musharu said during the dry season, the community travels long distances in search of water for themselves and their livestock.

“The area is very dry and some of it is mountainous. During the rainy season is the only time they can access water close by but from unprotected sources,” he said.

“That outreach by the church is very important because we reached out to the needy people not for them to come to church but for them to have the basic rights.”

Church members in the Chitungwiza Marondera District in Zimbabwe are studying and spreading God’s word in their communities with the help of international Bible study program.
Human Rights