Under Locke, TMF has grown from about $104 million to more than $700 million in assets under management and expanded its geographic range. While the foundation continues as a provider of loans and other financial services to United Methodist churches, Locke has stressed the ministry side of both its financial services and its other work: making grants, providing leadership development platforms, working with churches in defining their purpose and mission, and convening meetings of top church leaders.

Wesleyan Investive, with more than $100 million in assets, is managed and staffed by the Texas Methodist Foundation and has a national reach in providing financial services to United Methodist churches and other denominational entities. Locke has steered that organization in the direction of leadership ministry, too.

At age 70, Locke plans to retire later this year, once his successor at the foundation and the Wesleyan Investive is in place. Locke and his wife, Cindy, recently welcomed UM News’ Sam Hodges for a conversation in the home they’ve built amid woods near Honey Grove, Texas, where Locke spent weekends and summers working the family land as a boy. 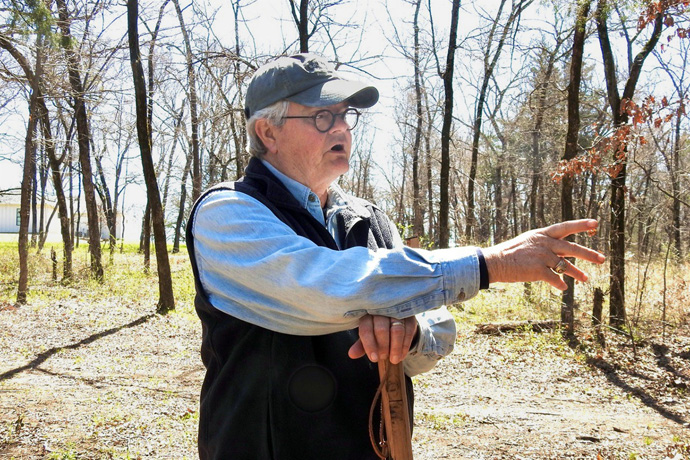 Tom Locke likes to walk the wooded acreage he owns near Honey Grove, Texas, where he spent weekends and summers as a boy, helping tend the family land. Locke has announced his retirement as president of the Texas Methodist Foundation. He’s led the organization for nearly 30 years, and in recent years also has been president of Wesleyan Investive. Photo by Sam Hodges, UM News.

Here’s an edited version of Hodges’ interview with Locke:

The United Methodist Church has different power centers — General Conference, the Council of Bishops, the Connectional Table, the agencies, the seminaries, the caucus groups, local churches, including megachurches. United Methodist foundations don’t get a lot of attention, but they too have a big role. How would you assess their importance?

That saint John Wimmer — who, with his colleagues at the Lilly Endowment, supported so many of us, both through being an advocate for funding, but also as a good conversation partner — introduced us to the concept of edge organizations.

What we’ve learned — and there are a lot of folks at the center of the church, bishops and others, who are understanding this as well — is that for the church to live into its fullest potential it needs a strong center but also a strong edge. I think foundations are in a beautiful place to play that role at the edge.

Foundations are also in a great place to provide additional impact to good things that are going on within the different (annual) conferences. When those generative ideas from a conference do surface, foundations can help accomplish those ideas, either through funding or through being a thought partner. 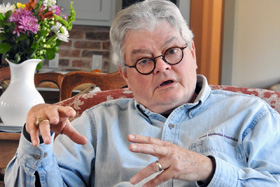 In this interview clip, Tom Locke looks back on his more than 30 years of service to the Texas Methodist Foundation.

TMF began to grow before you arrived there, but in accelerated fashion after you became president. What have been the advantages of growth?

This gives me an opportunity to say a word about Charles Laing. Charles was my predecessor as president of TMF. He was president for 16 years. At the time he took over, TMF had $4 million in assets under management. He grew it from $4 million to $104 million — almost exactly $100 million (in growth). And what he did I couldn’t have begun to accomplish. It took a rare set of talents such as his to pull that off.

The growth has continued. But growth for the sake of growth accomplishes nothing. I was in banking before I went to work for TMF. I was there in the mid-’80s, a real go-go time. There were a lot of banks that were chartered then, and there were a lot that made loans that shouldn’t have been made. A lot of those banks, those young ones, you’d talk to them about how they were doing and all they could talk about was how fast they were growing. They didn’t talk about profitability or sustainability. And a lot of those banks went out of business. So that was a good hard lesson that growth for the sake of growth really means nothing.

Several years ago, TMF did a strategic planning process. One of the things we figured out came in the form of a question: What if, someday, we discover that we have a billion dollars in assets under management, but we also discover we’re serving a lesser church? Did we win? By “lesser” church I don’t mean a smaller church. I mean a church less aligned with what God is asking of us. And every time I would ask the question, the answer would be: Well, if there was something else we could have done about the effectiveness of the church, then we didn’t win.

So that helped us understand that success for us was not the size of our balance sheet. Success was whether we were going to be able to provide resources to help congregations and institutions and individuals live into their God-appointed purposes and missions.

Now, that having been said, the fact that we have grown in assets and been a good steward of those assets has meant that we’ve had more financial resources available to do more — to continue to grow our leadership ministry, to grow our processes of helping congregations imagine their future. 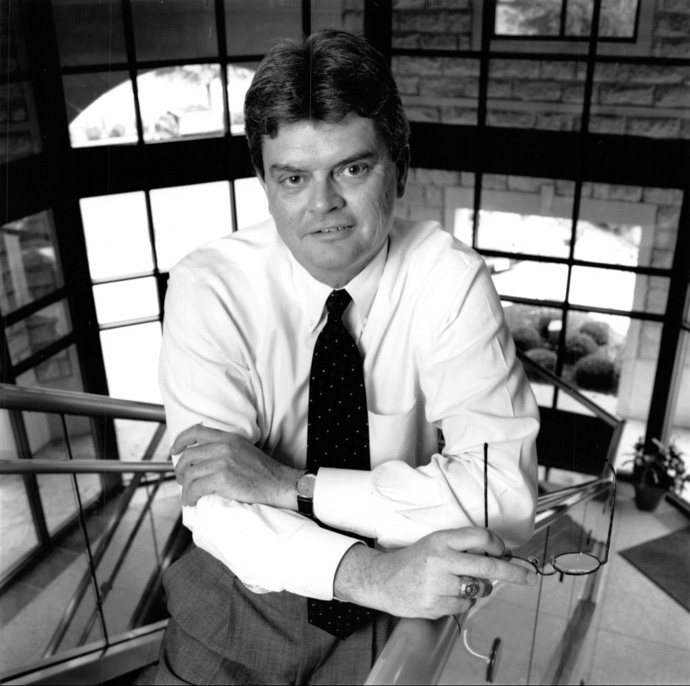 As you look back on your years at TMF, what gives you the most satisfaction?

I can’t come up with one thing, other than the fact that, in a holistic sense, it’s been a totally satisfying career.

If I’ve got to narrow it down, it’s the people that we’ve been able to associate with the organization, both our board and our staff. It’s the culture we’ve been able to put into place. We discovered our core purpose and values in 2000, and that’s the most important thing we’ve done in the time I’ve been there. We’ve continued to live into that purpose and those values. And we’ve been exposed to and been able to chase after some really good ideas.

Any regrets from your TMF years?

As an organization, we’ve been pretty aggressive in terms of pursuing new ideas and taking on new roles. That’s served us well as far as supporting ministry. But through the years, I know there were directions we could have gone and I chose for us not to go, and those will be the regrets. Those sins of omission — if I’m going to be plagued by something, that’s what it is.

Wesleyan Investive, formerly the United Methodist Development Fund, has created the Tom Locke Innovative Leader Award. Recipients are chosen for “spiritual entrepreneurship” in ministry. Each gets $50,000.

Read here about the 2020 award winners.

Is there a Bible character, story or verse that’s been especially important to you as you’ve led the foundation?

I was heavily influenced by my Mom. Mom had as deep a sense of gratitude as anyone I’ve ever known. Mom had polio back in the mid-’50s when the epidemic was around and she survived it but was always affected by it. She grew up in a really awful set of circumstances, as a girl and youth. But at the same time, throughout her life, she was always grateful, and had a deep spirituality about her — and a deep faith. So I would cite what I suspect was her favorite and most meaningful verse: Micah 6:8. “What does the Lord require of you, but to do justice, and to love kindness, and to walk humbly with your God.”

Gil Rendle (former senior vice president for the Texas Methodist Foundation) has been important to TMF and The United Methodist Church generally as a writer and thinker. What would you say is the most important thing you’ve learned from him?

From the macro sense, it’s the importance of a really good question, and the importance of a really good conversation. And you don’t go into that conversation knowing what the answer is and trying to manipulate the people toward an answer. You go simply with a good question. The notion is that if you get the right feet under the table, with people thinking about the right question, then wisdom and positive change will occur.

More at the micro level, his book “Holy Conversations,” which he wrote with Alice Mann, is the one that just made all the difference for me and really set TMF off on its own trajectory, helping congregations think more about God-appointed purposes as opposed to accomplishing self-appointed preferences.

The Texas Methodist Foundation changed its bylaws a few years back to reflect that it’s serving not just The United Methodist Church but the broader Wesleyan family. Does that mean a United Methodist church that becomes independent or joins another denomination can still seek help from TMF? And does it open you to working with African Methodist Episcopal churches and other Wesleyan-related churches that have never been United Methodist?

As long as they have a Wesleyan root or are in alignment with Wesleyan values, then, yeah, we can and want to be able to be in relationship with them. God’s not finished with any of us. Our hope and prayer is that whatever form or forms the Methodist witness takes, the Wesleyan movement that began our denomination with covenant groups, grace, social holiness, just to name a few characteristics, will remain a touchstone.

What’s next for you?

People are kind enough to ask, “What are you wanting to do?” My not entirely flippant answer has been: “Well, I want to go stand out in the middle of those woods and be real quiet and see what those trees have to say to me.” They probably have more wisdom within them than I have within me. So let’s see what they’ve got to say.

The Global Methodist Church, a theologically conservative breakaway denomination, has set May 1 as its official start date. However, it will take time for any potential separations from The United Methodist Church to take place.
Bishops