The 100-year celebration of the first Sami Congress, held in the Methodist Church in Trondheim, also gathered Methodists and indigenous people from around the world.

At the unveiling of a brass plaque, the Rev. Alfred T. Day III, top executive of Archives and History, congratulated the church and the Norway Annual Conference. He called upon United Methodists everywhere to “imagine what God will do if we open ourselves to divine purposes and holy living.”

Day said the Trondheim congregation “is an example of the power of God's life-transforming love demonstrated to others for all the world to see” and gave a nod to the countries represented at the gathering. Included were church members from Democratic Republic of Congo, Mozambique, Nigeria and the Philippines, along with the “First Nation people's in America” — Choctaw-Seminole, Cherokee, Southern Ute, Navaho, Lenape and Yuchi. 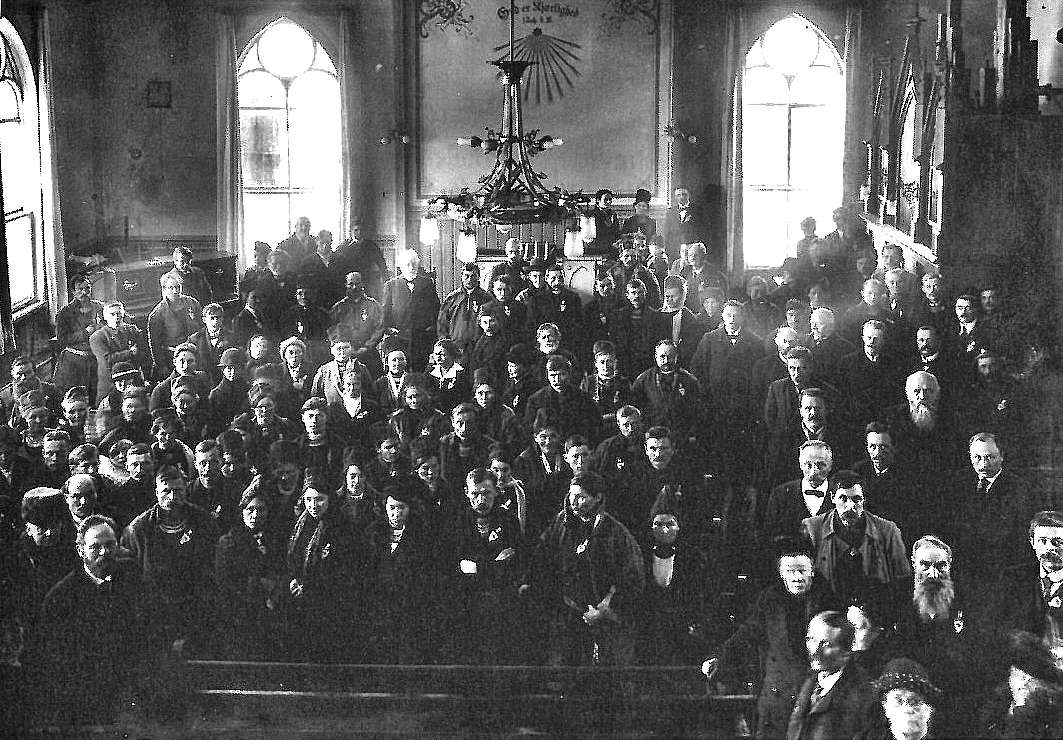 One century ago, Day recalled, discrimination of the indigenous people of Norway, the Sami people, was rampant. “But a gathering at this church on Feb. 6, 1917, displayed difference-making discipleship that was life-changing for the Sami people and all of Norway,” he said.

Feb. 6 marked exactly 100 years since the first Sami Congress, which drew representatives from all Sami in the Northern Hemisphere. The date is recognized by all Sami people as their national day and is celebrated annually in Norway, Sweden, Finland and Russia.

The Rev. Yngvar Ruud, a retired United Methodist minister, personified some of this history in his sermon during the Feb. 5 Sunday service and in a lecture at a Tuesday seminar.

He spoke about a long journey from shame to pride. From a young age, the Sami heritage was something not spoken about by adults or children. Many jokes at school had a negative view of Sami people and society in general cast them as a primitive people.

About 1970, with the political awakening of women and formation of grassroots movements for peace, against nuclear weapons and on behalf of many other causes, society began to change, he said. The rights and pride of the Sami people became something the general public considered important.

Today, being of Sami decent is seen by most people as a positive thing. Although most Sami are integrated into the general population, there is a growing interest for the Sami language and culture. In the north, some Sami still live as nomads with their reindeers. Others work in farming and fishing, two traditional ways of Sami life. 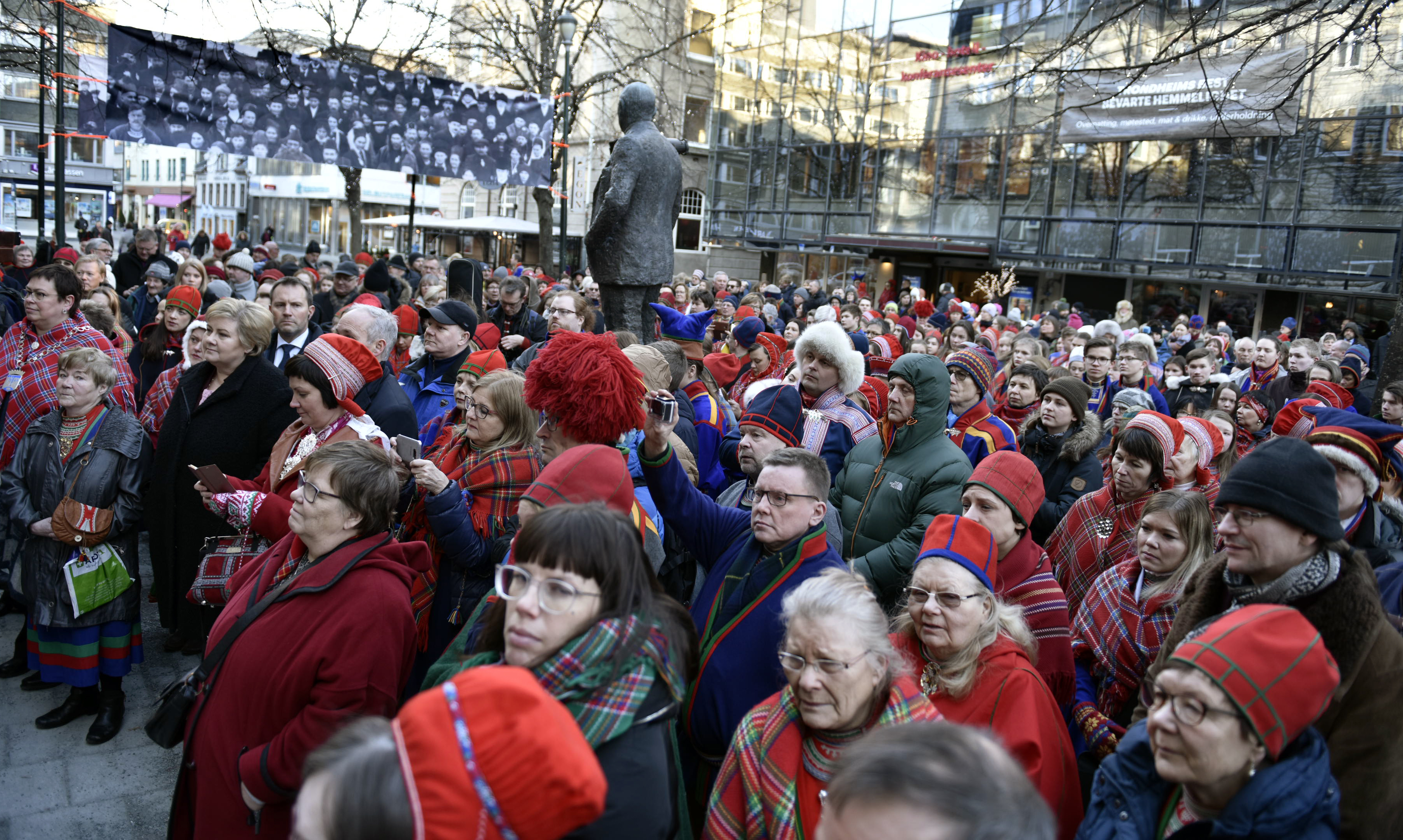 The centennial events in Trondheim, Norway, started with a meeting outside the United Methodist Church. The event was hosted by Sami youth organizations and attended by Norwegian Prime Minister Erna Solberg. Photo by Karl Anders Ellingsen.

The centennial events in Trondheim started with a Feb. 6 meeting outside the United Methodist Church celebrating the actual site of the first congress. That event was hosted by Sami youth organizations and attended by Norwegian Prime Minister Erna Solberg.

The prime minister, along with King Harald V of Norway, also attended a service later that day in the National Cathedral in Trondheim. United Methodist Bishop Christian Alsted, episcopal leader for Northern Europe, and the Rev. Liberato C. Bautista, head of the U.N. and International Affairs office of the United Methodist Board of Church and Society, participated in the service.

Bautista spoke about the international implications of the anniversary the following day, at a Feb. 7 seminar arranged by the Methodist Historical Society in Norway.

Imperial conquest, he noted, “introduced a violent rather than a loving and a forgiving God” to indigenous peoples.

“Public theology must take seriously an act of repentance where power wielders in public, and that includes religious institutions and institutions of the state, are to fully acknowledge this forced loss of indigenous memories,” he said.

That means re-inscribing what has been expunged from historical records, Bautista added.

“…In winning their souls for Christ, many indigenous nations have lost their ancestral domains and traditional cultures at proportions not unreasonable to say genocidal. Religion and culture are tightly intertwined in both the marginalization as well as the emancipation of indigenous peoples.”

But the traditional knowledge base of indigenous peoples gives them a role in setting international standards for the protection and safeguarding of human rights and human dignity ‘and in keeping intact the integrity of our humanity’s common patrimony–our Mother Earth,” Bautista said. 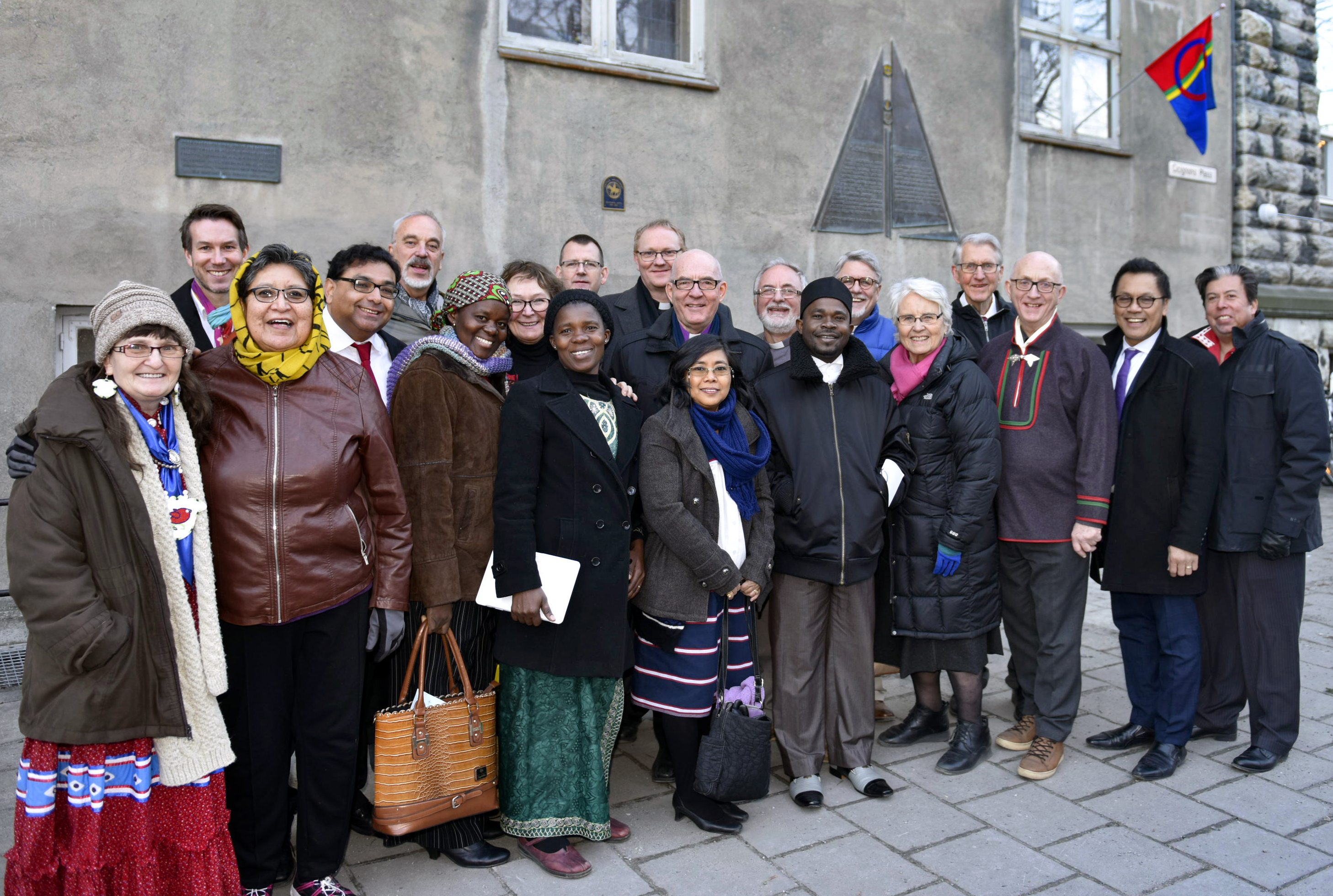 Methodists from Norway and international guests gather outside the Methodist Church in Trondheim, Norway, during the 100-year celebration of the first Sami Congress. The center plaque denotes the church as a United Methodist historic site. Photo by Karl Anders Ellingsen.

The seminar program featured a keynote address from Professor Peder Borgen, a Methodist and member of the Trondheim congregation, who researched the congress, documenting the little-known story from 1917 in a 1997 book.

The Sami artist Mathis Nango explained the forms and symbols on the bronze plaque now affixed to the outer wall of the Methodist church. Other speakers included Thor Bernhard Tobiassen, a retired minister and historian; Ruud, the Sami minister, and Rolf Steffensen, dean of the Folkehøgskole in Northern Norway.

There will be many events through the week celebrating the First Congress and Sami culture. One of them is an exhibition of Sami religious art and a cultural café every day in the Methodist Church.

The international delegation will travel north to Evenes, in Sami country north of the Arctic Circle, to meet local leaders at a school and exchange personal stories of life of indigenous people around the world.

Ellingsen is the head of communications for The United Methodist Church in Norway. News media contact: Vicki Brown, Nashville, Tenn., (615) 742-5470 or [email protected]. To get more United Methodist news, subscribe to the free Daily or Weekly Digests.

The drafters of the Christmas Covenant are leading webinars in the Philippines, Africa and Europe about their proposal for changing the denomination’s global structure.
Mission and Ministry

As the migration crisis continues, Europe “is becoming a fortress” where desperate people are being turned away, says a United Methodist pastor in Germany.