One hundred days after the March 2 tornado that claimed six lives and destroyed 200 homes in Indiana, more than 100 children, ages 4 to 12, from Henryville and Edwardsville gathered for a weeklong vacation Bible school at the Henryville United Methodist Church.

Amid noise from hammers and power saws across town, this year's "Construction Junction" VBS focused on reconstructing the life of Christ - and Henryville.

"The community members are tired and weary," said the Rev. Beverly Perry, pastor at Edwardsville United Methodist Church. "The children and parents could use a little encouragement, and God has provided."

During the preceding four months, Henryville United Methodist Church reached out to its community by providing financial support, food and shelter and coordinating volunteers from across the Midwest. Henryville's vacation Bible school coordinator, Debbie Belcher, said they've also been preoccupied with working on their own homes. "It's kind of like limbo. I didn't have a living room for a week."

Earlier this year, the Rev. Wilma Bone, who was then the Henryville pastor, started searching for additional help for vacation Bible school but received only a single volunteer from central Indiana. Bone expressed her discouragement during lunch with her clergy covenant group, a support system of neighboring clergy. Perry took her peer's words to heart and contacted Pam Beckman and Dee Kramer, vacation Bible school directors at Edwardsville, 25 miles south of Henryville. Eager to help, Beckman and Kramer volunteered to organize and coordinate the entire week for a combined vacation Bible school in Henryville.

Bone remembers how the mid-May call from Edwardsville brought tears to her eyes. "The United Methodists have a connectional system, and this is what it's all about," she said.

Beckman said they understood the importance of the church's support network, and Edwardsville was ready to jump in with both feet.

"It was a great opportunity for our church to serve in mission and provide help in Henryville through this ministry," she said, donning her hardhat and bright-yellow safety vest. "Most of our people had been looking for some way to help."

The Edwardsville volunteers answered the call by packing their hard hats and nails to build a vacation Bible school for the Henryville community. Beckman and Kramer had already written and used the Construction Junction curriculum 11 years ago.

Gohmann Asphalt and Construction in Edwardsville, which helped with relief efforts in Henryville, offered to donate construction signs and yellow caution tape as themed decorations. One month later, the Edwardsville van pulled up the first morning of VBS with its team of 12 volunteers and co-directors. 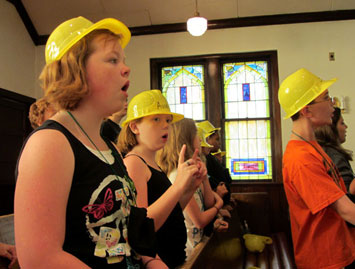 Singing while wearing hardhats goes with the theme of "Construction Junction."

Wearing toy yellow construction hardhats during the three-hour morning "Construction Junction," children from both communities tinkered with tools and learned about Christ. Each day was themed to teach the play-acting construction workers something new about Christ's life from his birth to his Resurrection. Every morning, they grabbed their personalized hardhats, found their groups in the worship pews and set out for a morning of rotating stations.

Beneath three tents in the parking lot, storytellers dressed in robes and beards performed narratives of Bible stories and Jesus' miracles. Nearby, between two trailers of showers and beds for volunteers, children played book-themed games to raise money to build a new community library in Henryville.

The church basement featured a marketplace from biblical times in which children became artisans constructing candles and crafts much like Jesus' contemporaries. In a classroom directly below a room with the cots of relief volunteers, children learned "Tales from the Tool Shed" and nailed miniature toolboxes together to take their crafts and lessons home.

Vacation Bible school also became part of the healing process. Volunteers swapped stories and memories of March 2 as they supervised the children. Children also began expressing their feelings about the disaster, some for the first time.

"They really started to open up," Beckman said. "By the end of the week, they were readily offering up their stories. It was a good thing for them to get that out in the open where it was OK."

Some of the children even related their experiences to what they were learning about Christ.

"Have you seen some miracles since the tornadoes?" Perry asked the children, receiving a resounding "yes."

In response to Perry, one child said, "A miracle is a miracle, even if it takes time."

*White is a summer volunteer in communication at the Indiana Annual (regional) Conference Center in Indianapolis and a junior communications major at Butler University.