A Sunday school room at Wesley Memorial United Methodist Church in Charlottesville, Virginia, has been home to Maria Chavalan Sut since Oct. 1, 2018.

Sut, from the indigenous Kaqchikel community in Guatemala, fled her home in 2015 after she was threatened and her home set on fire with her entire family inside. Her family survived. She filed for asylum but received a notice from Immigration and Customs Enforcement that she would be deported on Sept. 30, 2018. 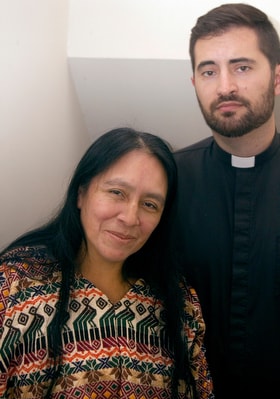 Sut sought sanctuary at Wesley Memorial, which is one of 10 United Methodist churches housing immigrants who have been threatened with deportation. More than 40 people are living in sanctuary in places of worship around the U.S. currently and more than 1,000 houses of worship have signed up to be part of the Sanctuary Movement.

According to a report by National Public Radio, the Department of Homeland Security sent out notices across the country to targeted individuals imposing civil fines of up $500 a day to immigrants who were ordered to be deported.

“It is outrageous to think Maria has $214,000 to pay the federal government,” said the Rev. Isaac Collins, pastor of Wesley Memorial. “I don’t even think the government thinks it is a fine they can collect. It is about scaring Maria.”

Collins said this latest tactic is not surprising because ICE has consistently tried to wage a psychological campaign against undocumented people.

“It has been eye-opening for the congregation to see firsthand the way our government treats the most vulnerable people on earth in our name,” he said. “Most people don’t have a front-row seat like we do.”

“Our United Methodist call for humane treatment of migrants is a statement about our faith,” said Bishop Minerva Carcaño, chair of the task force and episcopal leader of the California-Nevada region.

“Scripture is clear in its admonition to always welcome the migrant with compassion and justice. And Jesus is clear about his care for children as he welcomes them into his arms. United Methodist churches offering sanctuary to migrants lead the way in showing us what it means to be people of Christian faith in this moment,” Carcaño told United Methodist News. 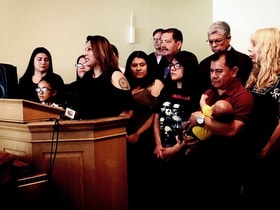 The United Methodist Committee on Relief has been offering grants to defray the congregational costs of this radical hospitality, said Thomas Kemper, top executive of the Board of Global Ministries and UMCOR.

“We firmly stand behind churches that peacefully resist government practices that are inhumane and harmful to refugees and asylum seekers,” he said.

The United Methodist Board of Church and Society leads the denomination’s advocacy work in support of justice for the migrant and immigrant. One of the most recent campaigns has been a call to end child detention. United Methodists of all ages are asked to send drawings and letters to Congress and the White House.

“We are grateful for the work of United Methodists across the United States who daily live out our faith by welcoming the sojourner,” said the Rev. Susan Henry-Crowe, top executive of the Board of Church and Society.

“We call on others to join us – now is the time to act, remembering those words originally written to the Galatians: ‘Let us not become weary in doing good,’ for we know that every effort makes a difference,” she said.

United Methodist Women have also been a strong voice in advocating for the rights of immigrant children and families.

“One hundred years ago we were working on community centers and settlement houses and working with immigrant girls in port cities around the country,” said Harriet J. Olson, top executive of United Methodist Women. “Now is the time to speak out and take action to support immigrants who are detained at the U.S. border and are sent on to locations around the country as their applications are being processed.”

Learn what The United Methodist Church says about global migration.

Church World Service, in which The United Methodist Church participates, is asking churches to join Sacred Resistance in response to the administration’s threat of massive raids. Sacred Resistance asks houses of worship to act as safe spaces for organizing and rapid response before, during or after enforcement actions.

An immigration sweep is expected to begin this weekend, according to the Associated Press. The operation was postponed last month by President Donald Trump and would target people with final deportation orders in 10 major cities.

The Interfaith Immigration Coalition is issuing a letter to Congress in support of the Protecting Sensitive Locations Act of 2019, which expands the Department of Homeland Security’s existing sensitive locations policy that prevents immigration agents from raiding schools, hospitals, courthouses and places of worship without prior approval and exigent circumstances. The letter has been signed by 235 religious leaders and 51 faith-based organizations.

“We are living in a time of human tragedy that calls us to rise up in resistance to the actions of the Trump administration toward migrants,” Carcaño said. “Allowing persons to die at our border because they are undocumented, caging children, and increasing the raids on homes and other places in search of over-stayed immigrants, including children and young people, separating them from their families all for political gain, is inhumane, unjust and immoral.”

United Methodist health centers in remote areas were key in helping to immunize children and end a measles epidemic that killed more than 7,000.
Mission and Ministry

For UMCOR, 2020 is one long emergency

At its annual meeting, the relief agency points to training, support as it deals with natural disasters, global health issues and the pandemic.