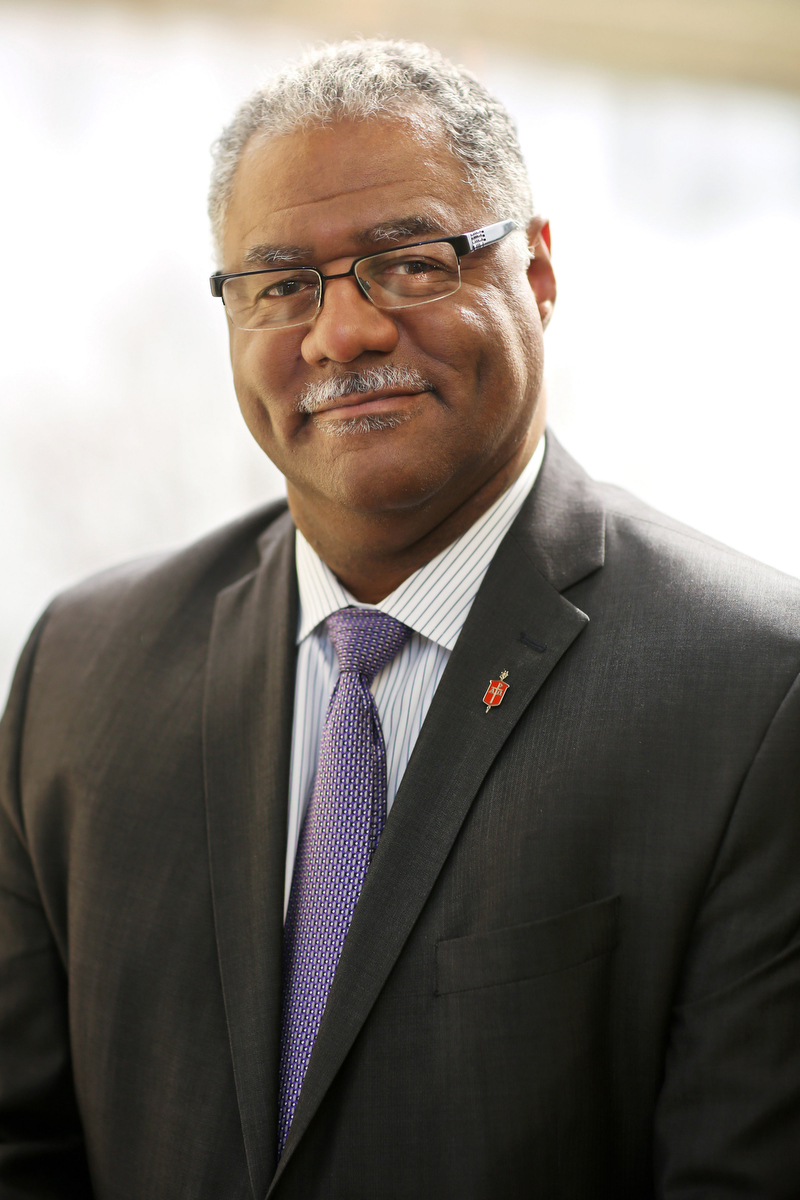 Bishop Julius C. Trimble
Photo by Tessa Tillett for the Indiana Conference.
I remember the pastor sharing the resurrection story and carefully and convincingly highlighting the women who were first to arrive at the empty tomb and become the first evangelists. He asked us to see ourselves in the ongoing story of Good News of the Risen Christ and the victory over sin and death.

The day after Easter, the prosecution continued to present its case against Derek Chauvin in the murder of George Floyd. One week later, in Brooklyn Center, Minnesota, Daunte Wright was shot and killed by a police officer. The two most common responses were that it was either justified or an accident. Millions of Americans act bewildered, baffled or dismissive when African Americans express their exhaustion, fatigue and righteous indignation.

Maybe by 2022, I will be willing to go to Minneapolis for another involuntary dose of generational trauma when we gather for General Conference.

Maybe no one reads this opinion and story that I own as mine, though it is not unique or isolated. Then I won’t have to read some regurgitated attempt to remind me that “All lives matter,” that most police officers serve and protect without bias, and the reason people are leaving The United Methodist Church is that bishops won’t stick to the Bible and uphold the Book of Discipline.

I believe in the resurrection as recorded in the Bible. I also believe in the value of conversation, education, and truth and reconciliation in the long struggle to dismantle racism.

UM News publishes various commentaries about issues in the denomination. The opinion pieces reflect a variety of viewpoints and are the opinions of the writers, not the UM News staff.
Black fatigue, historical trauma and the insidious, intractable nature of racism are shortening the lives of Black people. Society’s responses have been, “so sad or too bad.” A resolution denouncing violence, opposing racism, pledging change and the beat goes on — or should I say the beat down and shootings go on.

I believe in the resurrection as well as reparations: “The making of amends for a wrong one has done, by paying money to or otherwise helping those who have been wronged” (Oxford Dictionary).

My mother, who is 98 years old, a retired Chicago public school teacher, raised six children after my father died of cancer in 1969. Four boys and two girls. All the boys had negative encounters with police officers as teenagers and young men. On one occasion, decades before smartphones with cameras, three of us were stopped, handcuffed and sat on the curb. The crime was driving in a California suburb while Black.

Every morning, my mother spends time in devotion, Bible study and prayer, as she reported to me. “I pray for all of my children, grandchildren and great-grandchildren by name.”

As a woman who has seen the uneven progress of race relations and history's hurdles, she is full of hope, joy and persistent encouragement.

As one who experienced the sting of segregation in Montgomery, Alabama, she recounts her high school experience of getting on the bus, paying her fare, and then getting off the bus to re-enter through the bus’s rear door. This was life for Black people in the years of segregation.

We are not defined by our worst moments or highest hurdles. We hold to faith in God, passion for education and a belief that the arc of the universe bends toward justice.

The nightmare of repeated shootings of unarmed Black men and women by police cannot be ended by our collective sadness. We must commit to change the scales of justice and human relations so that all lives matter equally.

Yes, I believe in the resurrection and reparations, for those like my mother who have lived long enough to walk through the crucible of legalized segregation and institutional discrimination, and find themselves joining mothers and fathers praying that “Black Lives Matter” when stopped by police. We as a nation owe them at minimum an apology and a calculated commitment to address the generational harm that has been done.