United Methodists — including entire families — are among the hundreds killed after torrential rains caused deadly mudslides and flooding near Freetown.

Sahr Kelly, a member of Charles Davies Memorial United Methodist Church, lost his son and daughter to the flooding on Monday, according to the Rev. Sahr E. K. Fallah, pastor-in-charge. He said the homes of two members had been flooded.

The BBC reported that nearly 400 have been killed and at least 600 are still missing. Those numbers are expected to rise as recovery efforts continue. While much of Freetown was flooded, most of the deaths were in the Kaningo and Regent communities.

United Methodist Bishop John K. Yambasu mourned the loss of life “in this needless and preventable disaster.” Yambasu, president of the Sierra Leone Council of Churches, issued a statement on behalf of the council, the largest Christian organization in the country. The bishop and church leaders in other denominations visited the disaster area at Sugar Loaf Mountain on Aug. 16. 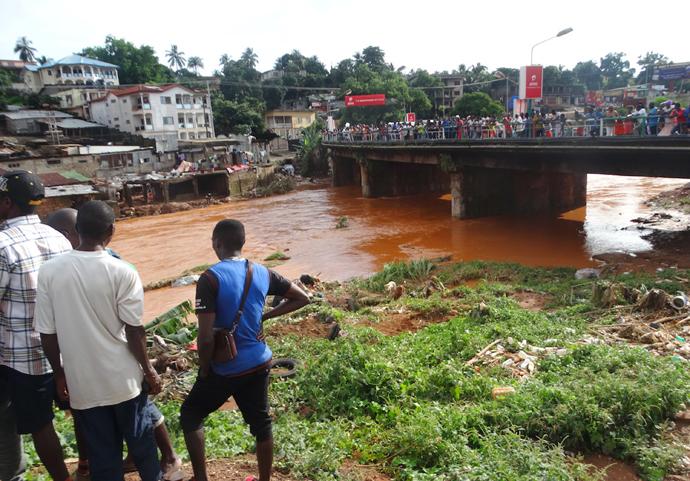 Volunteers wait at Wallace Johnson Bridge to spot and recover bodies in the aftermath of a mudslide and flooding at Sugar Loaf Mountain in Freetown, Sierra Leone. Photo by Phileas Jusu, UMNS.

“We empathize with the thousands of people, including mainly women and children, who survived the disaster and now live under life threatening conditions with no place they could call home,” Yambasu said.

The bishop noted that the city lies below the slopes of surrounding hills and lives are lost to flooding every year, but said this disaster is unprecedented.

“Never in the history of the city have we experienced such magnitude of sickening and horrifying disaster with houses buried, whole families missing and bodies discovered with dismembered parts,” Yambasu said.

He said massive destruction of natural vegetation for farming, fuel wood and for building houses, as well as stone mining, had laid soil bare, making it vulnerable to excessive water runoff and mudslides during the rainy season. 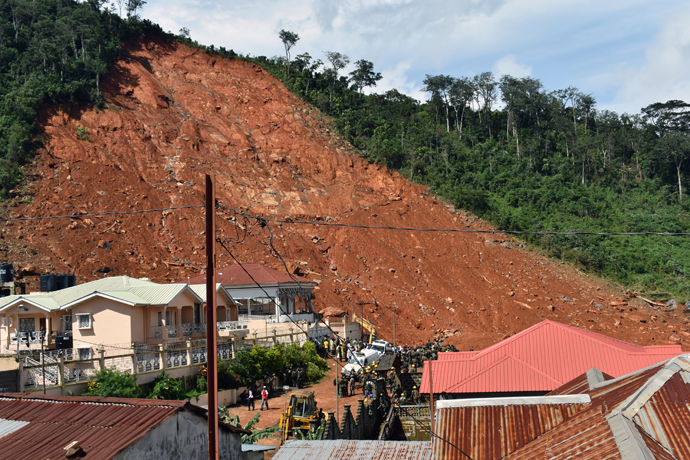 The second day of efforts to recovery bodies at the scene of a devastating mudslide at Sugar Loaf Mountain in Freetown, Sierra Leone, on Aug. 15. Photo by Phileas Jusu, UMNS.

On behalf of the Council of Churches, he called on government officials to expedite the identification and burial of bodies to prevent other unintended health consequences.

Registering survivors and providing temporary shelter will allow other agencies to distribute relief items to the survivors, he said.

The United Methodist Committee on Relief said in a statement that UMCOR is “making efforts to connect with our United Methodist partners in the Sierra Leone. We will continue to explore the options for responding to this tragedy.” UMCOR said funds will likely come from the International Disaster Response Advance #982450, if people want to help.

“Please pray for those families affected by this tragedy,” the statement said.

Yambasu called on member churches to donate food, clothing, blankets and other needed items and to observe three days of mourning, fasting and prayers beginning on Aug. 18. 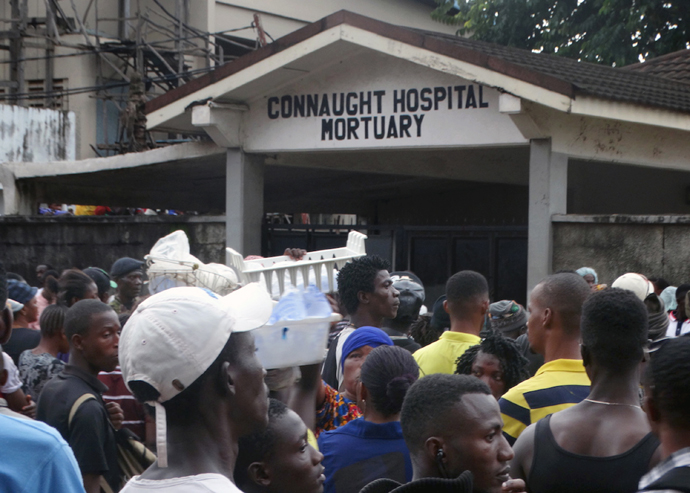 A crowd gathers at the main Freetown government Connaught Hospital Mortuary, where people wait for the chance to identify relatives. In the confusion and shock, not many had the opportunity to go in. More and more bodies were brought in as security forces tried to control the crowd and keep order. Photo by Phileas Jusu,

United Methodist Women were already collecting donations, including used clothing and cash for survivors affected by the disaster.

Sierra Leone President Ernest Koroma said the country has “once again been gripped by grief." Korma declared a week of mourning and asked all to observe a moment of silence at noon on Aug. 16.

“Many of our compatriots have lost their lives; many more have been gravely injured and billions of Leones worth of property destroyed in the flooding and landslides that swept across some parts of our city,” Koroma said in an address to the nation on Aug. 14 that recalled the deadly 2014 Ebola outbreak and a 2015 Freetown flood.

Koroma appealed for calm and asked all to avoid disaster prone areas. He said emergency response centers had been set up in the communities badly affected, as well as registration centers for survivors in various locations across the city.

At Kaningo, most of the homes washed away were shacks built on the banks of a stream flowing from the mountaintop. Many homes washed into the flooded stream while residents slept, causing them to drown.

Hundreds of bodies have been recovered at Regent where the landslide took place on a hill known as Sugar Loaf Mountain and recovery work continued as the weather improved on Aug. 15.

Local residents told UMNS they heard a loud sound about 6 a.m. on Aug. 14, followed by a gush of mountain mud down the valley that engulfed the sprawling community in minutes. The mud, shrubs and huge boulders that rolled from the mountain mutilated many of the bodies.

A few hopeful, wailing women were still around the morning of Aug. 15 as the operations to recover bodies resumed.

Emergency relief centers are being set up for people to donate for families affected by the flood and landslide. 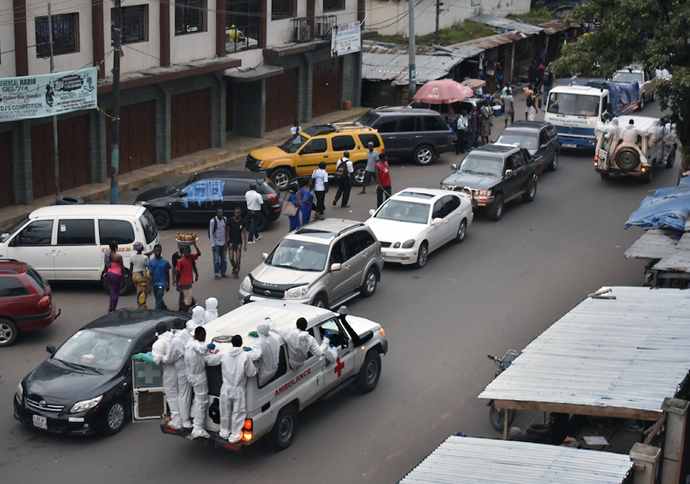 An ambulance with emergency personnel hanging on to the outside drives through a busy street in Freetown, Sierra Leone, after a mudslide devastated the Sugar Loaf Mountain Regent area. Photo by Phileas Jusu, UMNS.

The main government Connaught Hospital in Freetown is overwhelmed.  Several ambulances, police and military utility vehicles with young volunteers on board were still bringing in bodies, but the morgue was full and many of the bodies were being left in front of the morgue.

A Freetown fire force vehicle parked close to the morgue, apparently to provide water for cleaning of bodies that were covered in mud for identification.

More bodies were still being recovered, even as the hope of finding survivors waned.

Members of the city council and hospital sources said their focus was shifting to burying the dead.

They said priority would first be given to families who could identify their loved ones. The government is planning a general burial for bodies that could not be identified because they were recovered in pieces or damaged beyond recognition.