Hiwassee College, a United Methodist-related college founded in 1849 to educate first-generation college students in rural Appalachia, is closing May 10 for financial reasons.

The college’s board of trustees voted this week to close the Madisonville, Tennessee, school at the end of this spring semester. Hiwassee is the second United Methodist-related school to announce closure this year. Green Mountain College in Poultney, Vermont, announced in January that it would close some time after the 2019 spring semester, also due to financial issues.

A news release issued by Hiwassee noted the school was “proud of our historic mission of educating students for 170 years in the United Methodist tradition of John Wesley.”

Many Hiwassee alumni pursued additional education to become “pastors in several conferences as well as other denominations, teachers in our schools, pharmacists in the region and community leaders across the nation. Hiwassee College’s legacy will survive through those who attended the college and who continue to lead and serve,” the news release said.

Robin J. Tricoli, president of the college, said the college would assist students in finding another school.

“We are just now beginning to help our students get into other institutions, faculty into teaching opportunities and staff into positions. As you can imagine, this has just happened and we are working through all details at this time,” Tricoli said in an e-mail. “The Holston Conference has been extremely supportive of Hiwassee College at all times and we are very grateful.”

Tricoli confirmed that the University Senate, the professional body that determines which schools, colleges, universities and theological schools meet the criteria for listing as institutions affiliated with The United Methodist Church, had recommended removing Hiwassee from the list. But she said Hiwassee was appealing and is still listed as one of the church-related schools on the United Methodist Board of Higher Education and Ministry’s website.

Graduates and faculty greeted the news of Hiwassee’s closing with dismay, but some said they understood the financial issues facing the college.

The Rev. Gaye King noted that Hiwassee was known for educating students from low-income families. She said many Hiwassee graduates would have been unable to go to college without the school.

“Hiwassee may be closing, but its legacy will live on through the many people who have walked in and out of its doors,” said King, a 1973 Hiwassee graduate who served as a local pastor in the Holston Conference for eight years and as Holston Conference director of connectional ministries for 10 years.

“Of course, I’m disappointed in the closing, but I understand economically why it has to,” said King, who is now retired and lives in Knoxville.

The college said trends including substantially discounted or highly subsidized public education, changes in demographics, a rural location and declining enrollment all combined to produce an unsustainable economic model.

“Our current full-time equivalent enrollment is 225 students. On May 10, we will celebrate with 33 graduates: 23 will receive bachelor’s degrees and 10 will earn associate’s degrees,” the statement said. 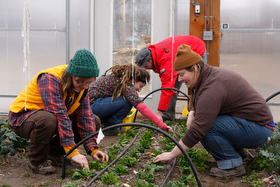 Students at Green Mountain College in Poultney, Vt., work in a campus garden in 2012. The United Methodist-related college announced in January that it would close some time after the 2019 spring semester, also because of financial issues. File photo courtesy of Green Mountain College.
Hiwassee is one of multiple United Methodist-related colleges that have closed over the last decade. Lambuth University in Jackson, Tennessee, closed in 2011. Lon Morris College in Jacksonville, Texas, closed in 2012, and Green Mountain, known for its sustainability and environmental work, plans to close later this year. When Hiwassee and Green Mountain close, there will be 115 schools, colleges, universities and seminaries affiliated with the church, according to the Board of Higher Education and Ministry.

Green Mountain President Robert W. Allen said the decision to close came “after a tireless pursuit of multiple options to remain open, including the rigorous search for new partnerships and reorganization of our finances.”

“Despite our noteworthy accomplishments related to social and environmental sustainability, we have not been able to assure the economic sustainability of the college,” he said in a statement. He said financial challenges were affecting liberal arts colleges throughout the country, and Green Mountain College was no exception.

The Rev. Jim Noseworthy, a former Hiwassee president who also worked with the school during his tenure as head of the Division of Higher Education of the church’s Higher Education and Ministry agency, said it was hard for Hiwassee to compete with the low cost of a public community college.

He said he was always “astounded” by the commitment of students and faculty to the college and noted that many faculty who could have found positions at graduate-level institutions stayed because they believed in Hiwassee’s mission.

“Hiwassee was never a rich college, but it was rich in its mission.”

He is a native of Zimbabwe and pastor at Mary’s Chapel and Woodlawn United Methodist churches.

“I’m just trying to process this, thinking about what’s next. I worked so hard to create the Christian Leadership program. I’m trying to think what is these students’ next move. ... I never thought it would come to this,” he said.

Dzobo said most of the five students currently enrolled in Christian Leadership program were on track to become pastors.

His students are enrolled in four-year programs. Although Hiwassee has traditionally been a two-year college, it also offered bachelor’s degrees in several programs.

Two of his students were upset when they called after the announcement, he said.

“My heart is broken for them, but I know God will call them and will know where to place them,” he said.

The Rev. Doug Fairbanks, senior pastor at Signal Crest United Methodist Church in Signal Mountain, Tennessee, graduated from Hiwassee in 1966 and served two terms as a board member.

“A lot of this has been about money. Hiwassee has never had money. It’s a missional school. The quality of a Hiwassee education has never been in question,” said Fairbanks, a former Knoxville district superintendent, who went on to earn his bachelor’s, M.Div. and D.Min. after graduating from Hiwassee.

“A lot of people went on from Hiwassee with a solid foundation to do a lot of wonderful things for The United Methodist Church, and I include myself in that,” he said.

Brown is news editor at United Methodist News Service and Spence is editor of “The Call,” the Holston Conference newspaper. Contact Brown at (615) 742-5470 or [email protected]. To read more United Methodist news, subscribe to the free Daily or Weekly Digests.

United Methodists in Holston Conference moved beyond prayers and got to work after learning about devastating floods and storms recently experienced by neighbors in Eastern Kentucky and Southwest Virginia.
Church Leadership

As longtime director of World Methodist Evangelism, he traveled the globe to share the gospel and encourage other Wesleyan Christians to do the same.
Social Concerns

United Methodists need the stability of established doctrine and the means to uphold it. Emulating the Catholic Church’s magisterium could serve that purpose.