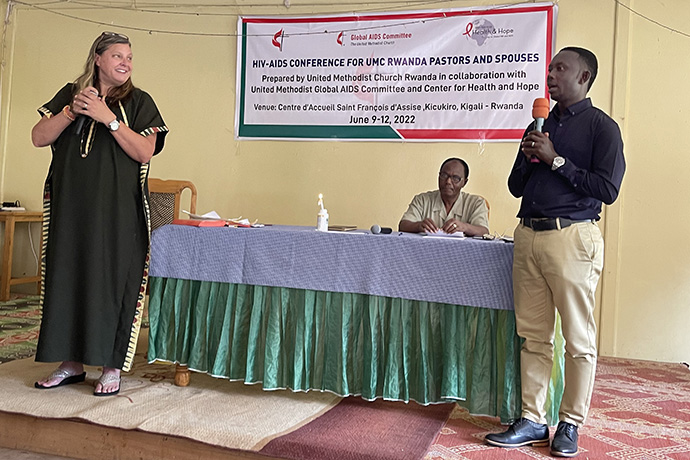 The Rev. Sunny Brown Farley (left) tells how AIDS has affected her life, as the Rev. Marc Baliyanga (center) listens. Farley, who is coordinator of the United Methodist Global AIDS Committee, and Baliyanga, dean of the Rwanda United Methodist Provisional Conference, spoke at a June conference on HIV and AIDS in Kilgali, Rwanda. Photo by the Rev. Donald E. Messer.

The church in Rwanda should no longer fear people living with HIV and AIDS as if they were lions in the jungle, declared the Rev. Marc Baliyanga, dean of the Rwanda United Methodist Provisional Conference, as he opened the HIV and AIDS Conference.

Sponsored by the United Methodist Global AIDS Committee and the Center for Health and Hope in Centennial, Colorado, the event for United Methodist pastors and spouses convened June 9-12 in Kigali.

“With accurate information and Christian compassion,” Baliyanga said, “pastors and spouses can prevent HIV and overcome fear, stigma and discrimination in their churches and communities.”

He noted that the seminar culminated a forum series ensuring that all 72 pastors and their spouses of the Rwanda Provisional Conference were educated about AIDS. The conference has nearly 130,000 members.

Dr. Angelique Nyamvura, a Rwandan physician and infectious disease specialist, stressed that HIV infections are not caused by witchcraft and sorcery, but transmitted primarily by unprotected sexual intercourse. “If male and female condoms are used properly,” she said, “they are almost 100% effective.

“Everyone is vulnerable to HIV,” Nyamvura added. “No one is automatically immune, so careful behavior and prevention are essential. Not everyone can or will abstain from sex outside marriage or be faithful in marriage, so to protect life and health, condoms are imperative.”

Warning of the dangers of virus transmission during the birth process and in a mother’s milk, she urged pregnant women to be treated by medical doctors at hospitals so a baby can be born virus free.

The Rev. Cimpaye Valentine, a district superintendent from Bujumbura, Burundi, reminded colleagues that “people neither get infected from mosquito and animal bites nor from eating from another’s plate, but through the exchange of infected semen or blood.”

Because traditional healers in African villages may promise false cures for HIV, it is essential that pastors and their spouses communicate accurate information. Doing so helps to ensure that people tested positive for HIV get free, life-giving medication and proper nutrition.

“Tell the people in your churches not to fear persons with HIV,” Nyamvura said. “Fight the disease, not the people. By taking precaution, promoting prevention, being tested, getting medication and praying together, we can win this battle.”

One pastor told the gathering that he has been HIV positive since 2006. “The real problem,” he said, “is not the disease, but how you deal with it. Stigma breeds fear. But because the Rwanda church has been supportive, my wife and I have continued our ministry.

“Pray to the Holy Spirit to give you the courage to accept the disease and tell others: ‘Take your free anti-retroviral medicine, and you can help others to lead a good and long life.’” 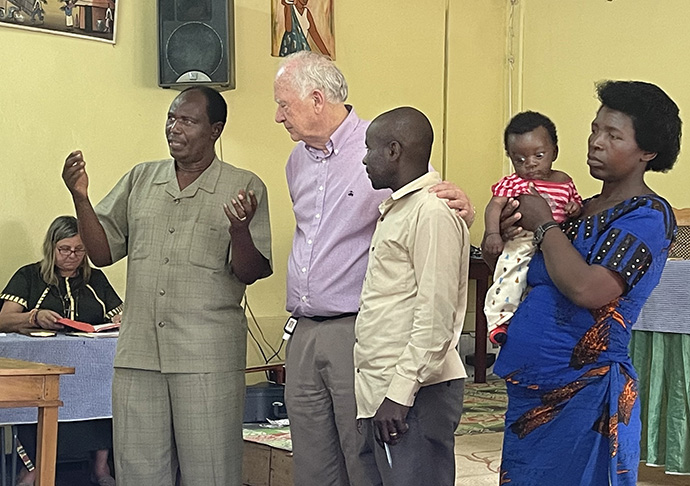 The Rev. Marc Baliyanga (left) addresses the HIV-AIDS Conference in Kigali, Rwanda. Baliyanga is dean of the Rwanda United Methodist Provisional Conference. HIV-AIDS and COVID-19 have created a “twin pandemic,” according to the Rev. Donald E. Messer (second from left), secretary of the United Methodist Global AIDS Committee. Photo by William Bradford.

During opening worship, the Rev. Sunny Brown Farley shared that AIDS had impacted her life personally. “After college,” she said, “I met and fell in love with a young man working in a hospital. He accidentally got infected by a needle while treating a patient. No treatment existed, and he tragically died.

“God, however, introduced me to his best friend, Jim, and we have two beautiful children after 25 years of marriage,” she said. “We don’t know why bad things happen to good people, but we are called to be thankful for life.” From Tyler, Texas, Farley is coordinator of the United Methodist Global AIDS Committee.

“AIDS is in retreat in Rwanda,” noted the Rev. Augustine Bahati, “as the percentage of infected has dropped from a high of 13% in the 1990s to a current average of 3%. However, because of violence in society and within marital relationships, women are more endangered at 3.7%.” He is a pastor and director of the Inclusive Mission of Health and Hope, Gisenyi, Rwanda.

Bahati continued, “Pastors are sexual humans, not supernatural beings, so no one is immune from possible infection.” He described Rwandan government efforts to promote prevention by urging men of all ages to be circumcised. Since 2010, the percentage of circumcised men in Rwanda has increased to 40%, but men in rural areas are resistant, as only 13% have undergone the medical procedure.

The Rev. Donald E. Messer, secretary of the Global AIDS Committee, noted that during the COVID pandemic, HIV and AIDS were overlooked globally. Initial indications are that people living with HIV suffer more severe sickness and die at twice the rate as others. Lockdowns prompted a 41% decrease in testing and a 37% decline in diagnosis and treatment. “People forget we have been facing a twin pandemic,” Messer said.

Infected people can enjoy productive lives, Baliyanga said. “Don’t discriminate against persons living with HIV,” he advised. “Keep their stories confidential. Be with them when they are having a hard time. Urge people to use condoms for family planning and to prevent the spread of HIV. Let us seek a society with no HIV virus.”

Conspiracy-related questions surfaced: Was HIV created by scientists in the laboratories of wealthy countries? Why do the rich have access to vaccines and cures? Church leaders and medical experts refuted myths, urging trust in science and emphasizing that no reputable vaccines or cures exist.

A rural pastor told conferees that his cousin died of AIDS, partly because his family was scared and did not understand that it was safe to care for him. “Due to fear, we failed,” he admitted. “Stigma kills. This conference belatedly helps me to understand that you can be with a person with HIV without being afraid.”

The United Methodist Global AIDS Committee received special grants for the conference from the Moody Foundation in Galveston, Texas, and the Center for Health and Hope. Because of the postponement of The United Methodist Church’s top lawmaking assembly — General Conference, which approves the denomination’s budget — the committee lacks funding for significant programming. Worldwide, nearly 38 million people live with the virus, 1.5 million were infected last year, and 680,000 died.

“Many participants have indicated they have been liberated from misinformation and their fear of persons living with HIV,” Baliyanga said. “Now they are ready to minister without stigma or discrimination.”

Messer, of Centennial, Colorado, is executive director of the Center for Health and Hope and was a speaker at the Rwanda event. He has served on the United Methodist Global AIDS Committee since it was created by the 2004 United Methodist General Conference.

United Methodist centrists and progressives have made common cause in working for the inclusion of LGBTQ people in church life, but a veteran General Conference delegate thinks the coalition could be short-lived.
Theology and Education