A Phoenix-based Early Response Team trained by the United Methodist Committee on Relief was quick to respond to a call for help from the Navajo Nation, the largest Indian reservation in the U.S., which has 174,000 residents and spans portions of Arizona, Utah and New Mexico.

By March 22, nearly 100 patients infected with COVID-19 filled the small clinics on the reservation and the two closest hospitals in Tuba City, Arizona, and Shiprock, New Mexico. Neither hospital was designed for trauma or serious illness.

Gail Ringelberg, a member of the Desert Southwest response team, received a frantic call from her daughter, an emergency room physician at Shiprock Indian Hospital. She asked for help in finding personal protective equipment for the hospital.

To learn more about Native American Ministries Sunday or to donate online, click here.
To support Native ministries mentioned in the story, visit https://greatspiritpdx.com or
http://www.umc-oimc.org.
Ringelberg reached out to the Desert Southwest Conference.

“We keep a large supply of PPE, which includes 200 Tyvek suits and 40 N95 masks, which we just restocked ahead of the pandemic,” said Dr. Polly Turner, co-conference disaster coordinator. “We sent the entire supply to the hospital in Shiprock.”

The protective equipment arrived just in time for a surge of patients.

“God works in mysterious ways,” said Ringelberg. “If I had not met Polly last summer on an (Emergency Response Team) trip, I would not have known about the suits in the trailer for when my daughter called with a plea.”

With more than 1,100 confirmed COVID-19 cases and 44 deaths, the Navajo Nation ranks behind only New York and New Jersey for per-capita confirmed cases, according to the Salt Lake Tribune. The reservation has implemented curfews to help stop the spread of the virus.

Native Americans already suffer disproportionately from diseases such as hypertension, asthma, cancer, diabetes and tuberculosis compared to other ethnic groups — putting them at higher risk for fatal complications from the coronavirus, according to the National Congress of American Indians.

“It’s not uncommon for our people to have multiple families living under one roof barely making it from paycheck to paycheck,” said the Rev. David Wilson, Oklahoma Indian Missionary Conference superintendent. “The risk of spreading the disease through an entire family is very high.” 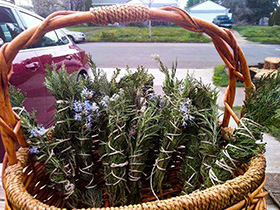 “We are trying to address food insecurity for our tribal people. The churches selected are already operating food banks, children’s ministries, and serving Native elders on shoestring budgets,” Wilson said.

OIMC has been working with tribes such as the Cheyenne and Arapaho who requested help for feeding Native elders. The conference also sent funds to support emergency needs on the Standing Rock and Yankton Sioux reservations in South Dakota. The missionary conference has supported the tribes over the past few months as they recover from extreme weather events including heavy flooding.

Food insecurity also is an issue among Native communities in Portland, Oregon. The Great Spirit Native American Fellowship, the only Native United Methodist ministry in the Oregon-Idaho Conference, raised $2,500, which was matched by the conference, to donate to the Native American Youth Association.

The fellowship has partnered with the group on efforts to reach Native peoples in the Portland area. Visa gift cards totaling $5,000 were distributed to the association’s network of Native elders and families in need.

“With the stay-at-home order, we haven’t been taking food around to people,” said the Rev. Allen Buck, pastor of Great Spirit Native American Fellowship. “We usually meet people at the grocery store, let them pick out what they need, and then pay for it all.”

In addition, the fellowship has connected with coastal tribes and will be delivering food and supplies to support members of the Confederated Tribes of Warm Springs, as well as the Klamath and Modoc peoples of Oregon.

In New Jersey, one of the hardest-hit states in the country with more than 85,000 COVID-19 cases, St. John United Methodist Church in Bridgeton is serving the Nanticoke Lenni-Lenape and other Native American tribes. It has seen enrollment in its food giveaway program triple.

“A constant healthy food supply is a need in the tribal community,” said Cynthia Wilks-Mosely, a member of St. John. “We distribute donated items such as healthy veggie pizzas, USDA and State of New Jersey commodities, and fresh fruits and veggies, nearly 20 tons total, helping more than 150 families.”

She said the church plans to increase food supplies in partnership with the Community Food Bank of New Jersey, local businesses and farmers.

“We are a designated healthy pantry, and we know healthy nutrition helps fight illness,” said Wilks-Mosely.

Since much of the nation will still be under stay-at-home orders, Wilks-Mosely said she hopes United Methodists will find a Native worship service online, donate to the Special Sunday or a local Native ministry, and find other virtual ways to observe the day.

Underwood is a communication consultant with ties to the Oklahoma Indian Missionary Conference. She is a member of the Comanche Nation of Oklahoma.

The board of The United Methodist Church’s finance agency has approved a monthly stipend for active bishops who serve more than one episcopal area in this time of disruption.
Faith Sharing

The rewards of online ministry are too rich to give up if and when the coronavirus is a thing of the past, said a pastor in Louisiana. Three stories from First United Methodist Church of Baton Rouge illustrate his point.
Church History