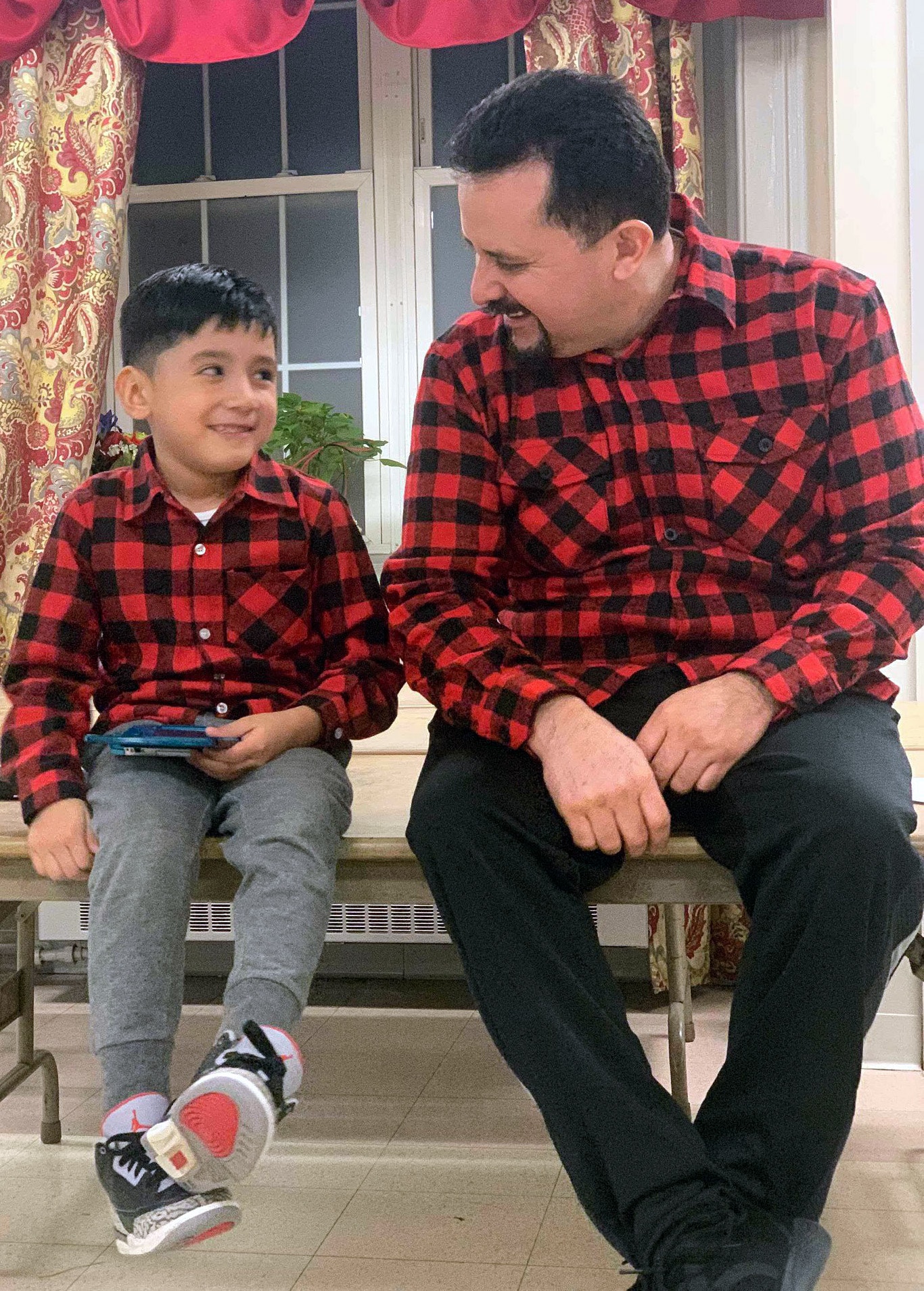 Nelson Pinos sits with his son, Brandon Pinos, age 6, in the fellowship hall of First and Summerfield United Methodist Church in New Haven, Conn. Pinos, who has lived in the U.S. for 26 years, is currently living in sanctuary at the church. Image courtesy of the "Keep Nelson Home" Facebook page.
For nearly a year and a half, a United Methodist congregation in New Haven, Connecticut, has provided safe haven for a man suddenly facing family separation and deportation.

Now, lawyers for Nelson Pinos have the chance to argue his case May 14 before the 8th Circuit Court of Appeals in St. Paul, Minnesota.

Supporters in Connecticut and Minnesota also organized a May 13 press conference to be followed by a prayer vigil on the morning of May 14.

Pinos, a native of Ecuador who has lived in the U.S. for 26 years, has no criminal record. He and his partner, Elsa, have three children who are U.S. citizens. A homeowner, he has paid income taxes for at least 18 years through a Social Security card issued by the Immigration and Naturalization Service/Immigration and Customs Enforcement.

In November 2017, after ICE issued a date for him to leave the country, Pinos chose to take sanctuary at First and Summerfield United Methodist Church.

He took up residence just as another Ecuadoran immigrant, Marco Reyes, was leaving the church. After 105 days at First and Summerfield, Reyes was granted another stay of his deportation order and was able to return home to his family. His case is still in process.

Pinos was living in New York when he was initially taken into custody by INS and then released during a short trip to Minnesota in 1994. Later, INS mailed a court appearance notification to an address in Minnesota, which he said he never received. Pinos said he was unaware of the deportation order issued when he did not appear before the Minnesota court.

Pinos is not required to be present at the May 14 oral hearing, but his attorneys, his two teenage daughters and a few supporters — including the Rev. Vicki Flippin, the church’s pastor — have traveled to St. Paul.

“We prayed with him in church yesterday,” Flippin told United Methodist News Service in a call from the Minneapolis-St. Paul airport, describing herself as both worried and hopeful. “He’s anxious. A lot is at stake for him.”

She was headed to a 5 p.m. press conference outside the offices of U.S. Sen. Amy Klobuchar, hosted by the Interfaith Coalition on Immigration and Minnesota Immigrant Rights Action Committee.

Flippin said she also would take part in a prayer vigil outside the federal courthouse at 7:30 a.m. May 14 before joining Pinos’ lawyers and others in the courtroom. A three-judge panel will hear the appeal and the lawyers are only given 15 minutes to argue his case, she added.

“If he gets a favorable ruling here, it just basically means that they are going to reopen his case,” she explained, which possibly could mean a transfer to a court in Connecticut. The real hope, Flippin said, is that he receives a stay of removal, allowing Pinos to return home to his family while the legal process is continuing.

An advocacy group called Keep Nelson Home set up a GoFundMe page to raise money for expenses associated with the St. Paul court case and offer other types of support.

The board of The United Methodist Church’s finance agency approved adding the term “non-binary” alongside “male” and “female” on church statistical forms. The change only affects U.S. congregations.
Immigration

Maria Chavalan Sut, who lived in sanctuary at Wesley Memorial United Methodist Church in Charlottesville, Virginia, has been granted a Stay of Removal for one year.