"Good brothers and sisters, thank you so much for this food."

Louis and Madame Felix, 74 and 76, were the first to receive a white plastic bag containing 18 pounds of rice, three pounds of beans, a quart of cooking oil and a one-pound bag of salt from the United Methodist Committee on Relief Jan. 29.

"We were married here and baptized here," said Mr. Felix, standing in the yard of Mellier Methodist Church. The church and school were both destroyed in the Jan. 12 earthquake. So were the homes of the people sitting quietly on pews and benches under the shade of trees waiting to get their allotment of food.

Household representatives waited until their names were called to receive food and Aquatab water purification tablets. 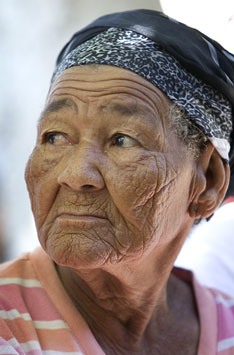 Madame Louis Felix, 74, is first in line to receive a food package from UMCOR.

A few days before UMCOR arrived with the food, church leaders canvassed the community and decided which families would receive the distribution. Families were chosen based on the greatest need; many were members of the church but not all.

Stories of humanitarian aid workers being mobbed by frantic crowds were a far cry from the peaceful, respectful distribution handled by church volunteers and UMCOR.

People were waiting when two UMCOR vehicles drove on the grounds. They were patient while volunteers arranged tables and chairs and talked about how to distribute the goods. They sat quietly and paid close attention to instruction on the use of Aquatabs to purify drinking water.

"Don't be mad if you don't get some beans and rice," warned Marc-Arthur Benoit. "There is only enough for 140 families but you will all get the Aquatabs."

The first name was called at 10 a.m., the last at 10:45. Men, women and children walked down the dusty path next to a sugar cane field back to their makeshifts homes with the bags on their heads and smiles on their faces.

The few who did not receive a bag stayed to get the tablets and see a demonstration on using PUR, a Procter and Gamble powder to separate dirt and harmful bacteria from water.

UMCOR plans to work in Haiti for the next several years, said Melissa Crutchfield, an executive with UMCOR.

Six young people who helped divide the food the day before and the church's volunteers in Mellier also received a bag. One hundred and seventy households were served, said Crutchfield.

The Rev. Gesner Paul, president of the Methodist Church in Haiti, stopped by to see how the distribution was going. 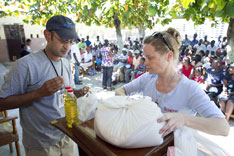 "When we heard UMCOR was coming to Haiti to help we were very happy," he said. "But you know there is a difference between words and actions. It is not only that you have come and said something but you put your words into action."

Rebuilding Haiti will take five or 10 years or even more and we will need the help of the international community and The United Methodist Church, Paul said. "It will also take the courage of Haitian people to overcome what happened on Jan. 12. We must work together to rebuild Haiti."

Crutchfield, Sharad Aggarwal and the Rev. Edgar Avitia Legarda, staff executives with UMCOR, came to Haiti Jan. 21 to start assessing the needs to restore and reconstruct the country.

"What has really struck me on this visit is Haitians helping Haitians," said Crutchfield. "From the young people helping us bag up the food, to the vendor who gave us a discount on the rice because it was going to aid his fellow Haitians, to the church helping take responsibility for organizing the food distribution today, to those leaving with sacks of food, vowing to share with their neighbor. UMCOR helped facilitate but they really helped each other."

"Today's pilot food distribution was just one of the first steps UMCOR will take hand in hand with the Haitian people and their leaders to relieve the suffering caused by the earthquake and to restore their homes, livelihoods and communities," said Aggarwal. "Witnessing the strength and resilience of the community in Mellier, I am confident we will be successful in our mission here."

The group toured several of the circuits where Methodist churches, schools and clinics were destroyed. After meetings with church leadership as well as 29 residents of Mellier they chose the rural community for a distribution of food.

The outlying areas are not receiving as much attention from humanitarian aid groups as the capital city of Port-au-Prince.

For many, the gift from The United Methodist Church was the first help they have received. 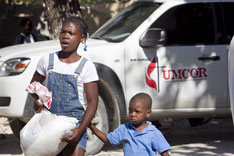 Octande Grard, 50, said this was the first food she has received since the earthquake. "We will ask God to bless those who sent this food."

Olga Cange, 62, said the earthquake "broke my house. Now I live like the goats on the ground. I am very happy to get this food. May God give you strength to come back."

"Next time, maybe you can bring us some plastic houses," said Felix Fredtz, 60. "I am very happy for the rice and beans."

Many people, like Lucy Imacule, 60, also had another special request.

"Please come back and rebuild our church."

Two churches are continuing a unique ministry created by the late Rev. Doug Williams to make brightly colored wooden toy cars to give to children in foster care and those enrolled in the church's early childhood program. Between them, the two churches have distributed more than 17,000 toy cars.
Global Health

Healing Guatemala, a medical mission in Guatemala that is connected with the South Carolina Conference, is taking a huge leap of faith in the hopes of saving a young girl’s life. The ministry is arranging to get a bone marrow transplant for Dulce, a 10-year-old with a rare genetic disorder. But Healing Guatemala needs financial help for the procedure.
Disaster Relief