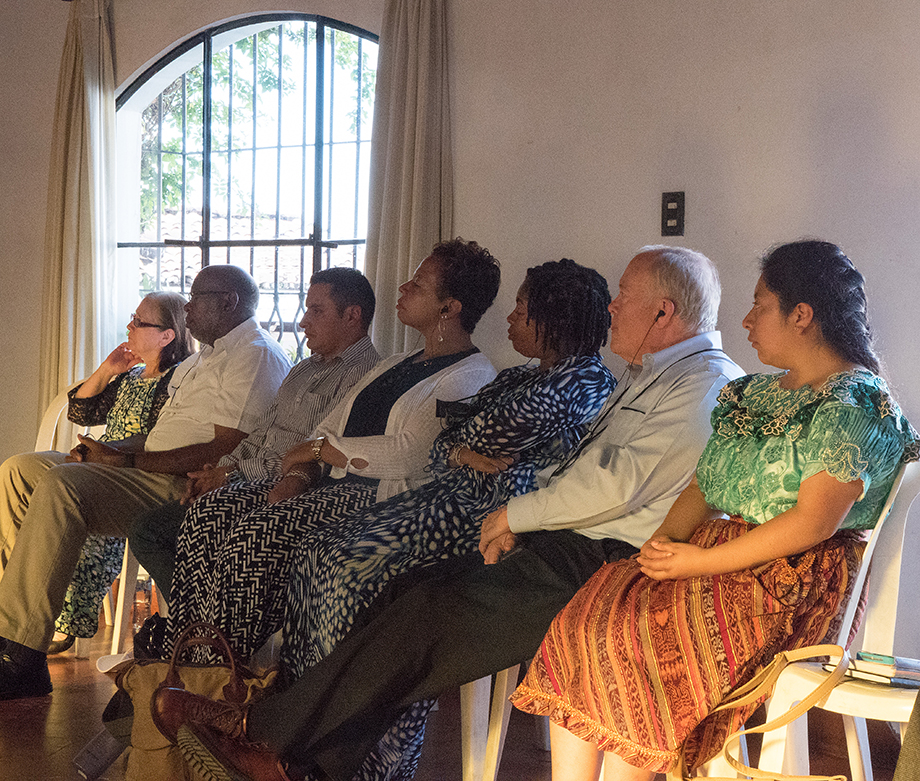 United Methodist bishops and members of the Evangelica Nacional Metodista Primitiva de Guatemala church listen to an overview of Guatemala and Methodism at Santo Tomas Hotel in Chichicastenango, Guatemala.

It was a day of celebration for the Evangelica Nacional Metodista Primitiva de Guatemala church.

The white tile floor in front of the altar was covered in fragrant green pine needles sprinkled with red and yellow rose petals. Colorful banners hung from the rafters and cool breezes wafted in and out of the open windows and doors.

The Rev. Juan Ixtan, president of the Guatemala church’s executive committee, and other pastors from the region, shared Holy Communion, a meal and their hearts with United Methodist U.S. bishops and church leaders visiting Iglesia Nacional Methodista Primitiva Fuente De Vida, a church perched on the side of a mountain. 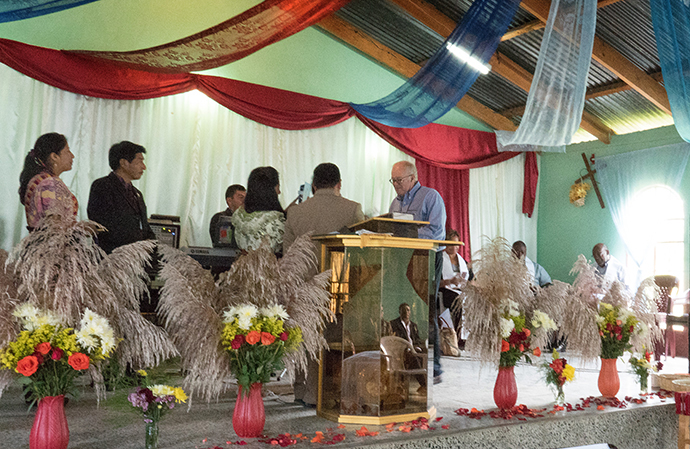 From the moment the group arrived in Guatemala City on July 22, the executive committee of the Evangelica Nacional Metodista Primitiva de Guatemala church stuck like glue to the U.S. team. It wasn’t until the afternoon of the worship service, when the pastors began to share the reality of their dangerous ministry, that it became clear what they were sacrificing to be there.

Sitting in a circle, the pastors started slowly talking about the gangs, “maras,” who are in control in their rural area. 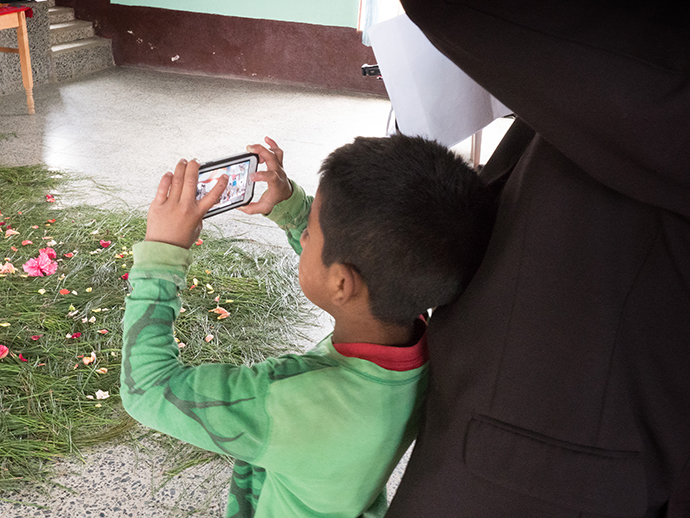 A young member of Iglesia Nacional Methodista Primitiva Fuente De Vida, joins in as one of the photographers during a visit from U.S. United Methodist bishops and church leaders.

The pastors explained they hold worship on Mondays and never hold any services at night. Maras decide everything, even when worship can be held, Ixtan explained.

After 36 years of civil war, military guerillas were replaced by the maras. “The only difference is the gangs are doing it for money, not politics,” he added.

“We are persecuted by violence, we lost so many churches,” Ixtan said. “One congregation completely disappeared. Some died, some immigrated to the coastal capital and others just disappeared,” he said. 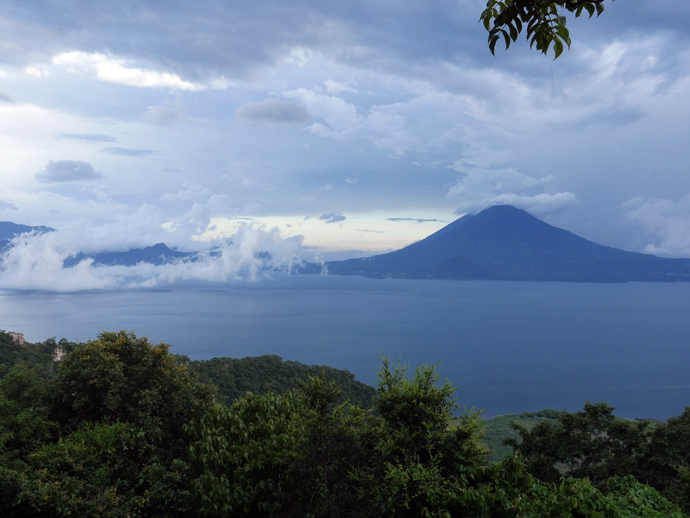 The pastors spoke of developing churches under the shadow of constant threats from the maras.

“It was both sobering and inspiring to learn from them about their anxiety at being with us for even two or three days, because it meant they had to leave their families back home, alone and unprotected,” said James Perdue, a Global Ministries missionary for migration in Central America and Mexico who was part of the visiting team.

“In spite of all this, perhaps because of it, those who work with the churches there are doing valiant work, and they remain a happy and hopeful group,” he said. “Laughter was abundant, as they witness to God's abundant life in the midst of death threats and suffering.”

It was Perdue’s first “on-the-ground” visit to the indigenous region of Guatemala. Perdue explained it is his job to study the migration situation in Central America and Mexico and then identify and connect with ecumenical, civil society and educational partners in ministry with migrants.

“Throughout Mexico and Central America the indigenous people are the most vulnerable and susceptible to forced migration due to widespread violence,” he said.

Karin Solorzano, coordinator of projects for Evangelica Nacional Metodista Primitiva de Guatemala church, gave an historic overview of the church which has been in existence for 80 years. There are 110 churches in 11 districts. There are 9,539 members, the majority are women and there are many children, she said.

“Our mission priorities are construction, education and health care,” she said.

The Guatemalan pastors talked passionately about their work and frankly about their daily struggles. None of them get a salary. All the pastors work at one or more jobs in addition to serving as pastors.

The Rev. Rodolfo Rodolfo René Cardona expressed some of his frustration and despair.

“Should I leave or continue to work in poverty? I take it to God, should I drop everything? I want an answer God,” he asked. Cardona is pastor of Arca de Noé (Noah’s Ark) Methodist Church at Caserío Los Ciprianos, La Reforma, San Marcos, near the border of Mexico. 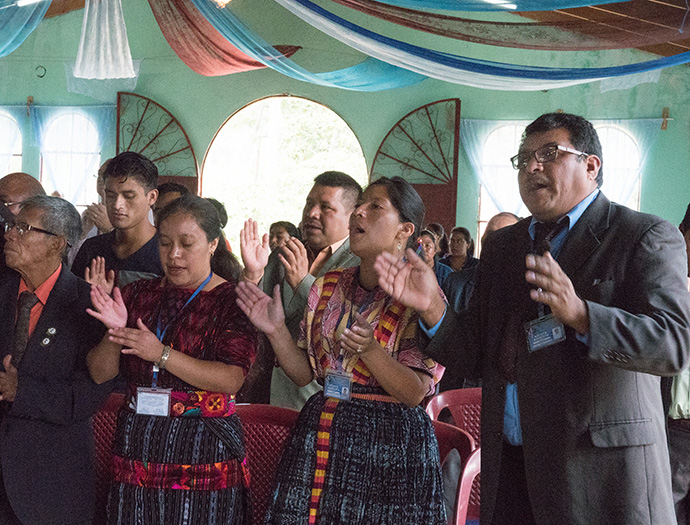 The pastors also talked about feeling left out and neglected by The United Methodist Church and made reference to the Act of Covenant signed at the 1992 United Methodist General Conference with the Evangelica Nacional Metodista Primitiva de Guatemala church.

The covenant states The United Methodist Church recognizes the baptism and ordination of ministers of the Evangelica Nacional Metodista Primitiva de Guatemala church, and commits to sharing Holy Communion and to conducting joint programs and exchange visits.

The pastors said they had been hurt in the past by decisions made by The United Methodist Church without consulting them. He said some pastors were even accused of stealing money or demanding money to sign documents. 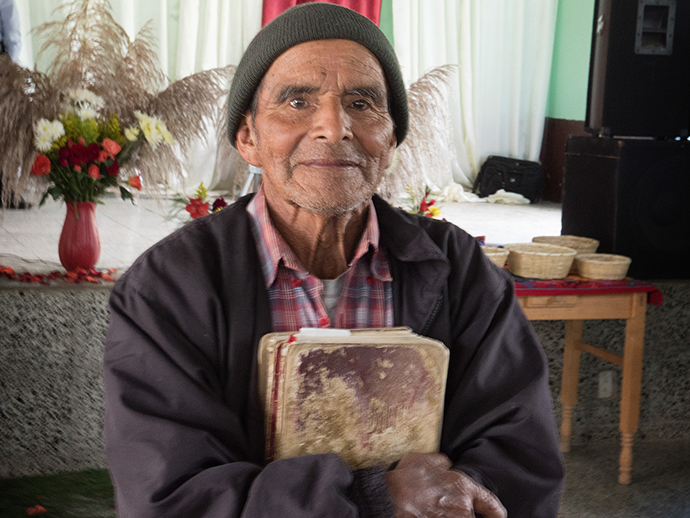 Manuel Ixtan Gerõnimo, a member of the congregation at Iglesia Nacional Methodista Primitiva Fuente De Vida, said he has been planting seeds about Christ’s words from the Bible he has had for 40 years.

“I only have a third-grade education, I never had a chance to study. I don’t speak English,” Ixtan said. “If you have any doubts about us, consult with us,” he added.

The pastors expressed appreciation for the visit from the bishops and church leaders.

“We have talked person-to-person, face-to-face now,” Ixtan said. “It is not the same as email, when there is unity there is a blessing. You have blessed us.”

“With the flame you lit, we are going to expand and bring spiritual love to others,” he said. 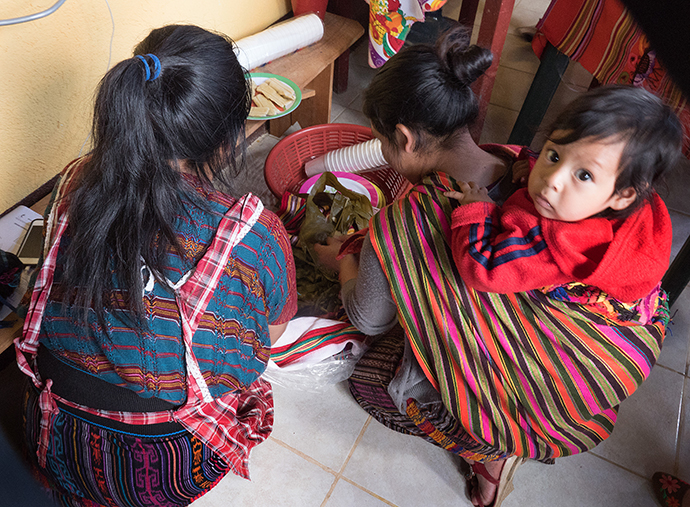 Women from the congregation prepare lunch for church leaders from the United States and neighboring communities.