As the Dec. 16 televised interfaith service made clear, the response in Newtown, Conn., to the tragic shooting at Sandy Hook Elementary School has transcended religious boundaries.

The Rev. Stephen J. Sidorak Jr., top executive of the United Methodist Commission on Christian Unity and Interreligious Concerns, considers such diversity "a sign of things to come, religiously speaking," in an area once considered Yankee and Protestant.

"The interreligious response (in Newtown) was quite impressive and, I think, sophisticated in the best sense of that word," said Sidorak, who previously had served for many years as executive director of the Christian Conference of Connecticut.

Sidorak has experience in organizing that type of joint response. Three days after the terrorist attacks on Sept. 11, 2001, a service at the Cathedral of St. Joseph in Hartford drew 3,000 people inside and 1,000 outside to the largest interreligious gathering in Connecticut's history.

He was able to pull that off because the connections already existed through the 7-year-old Connecticut Council for Interreligious Understanding, of which he was co-founder and past president. 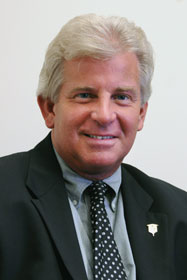 The Rev. Stephen Sidorak
A UMNS photo by John Goodwin.

"We built up relationships," Sidorak explained. "We nurtured them; we sustained them. That's what it takes.

"Obviously, the religious community of Newtown had done that. They were there for each other."

The Rev.Karen Karpow, pastor of the United Methodist Church of Danbury nearby, confirmed the area's religious diversity, pointing to Danbury's own Association of Religious Communities. That organization sponsored a prayer vigil for Newtown on Friday evening.

A contingent from her congregation worshipped with the Newtown United Methodist congregation at 8 a.m. Sunday before Danbury's regular 10:30 a.m. service. During children's time at their own church, Karpow introduced a volunteer team scheduled for Hurricane Sandy relief work this week on Staten Island and talked "about how we respond when we're afraid - that terrible things happen, but helpers come." The children then circled around the team and commissioned them.

Praying and grieving together

During the televised service, the Rev. Mel Kawakami, senior pastor of the Newtown United Methodist Church at Sandy Hook, which is near the school, was paired with Rabbi Shaul Praver of Congregation Adath Israel in giving the opening general prayers of grief and consolation.

Praver, who conducted the funeral Dec. 17 for the youngest victim, Noah Pozner, told the New York Times that clergy members in Newtown are "very close" and had been in constant contact since the shootings.

As the service began, the rabbi sang Psalm 46. Kawakami referred to those killed as "lights lost to the world" and he prayed for God's tender mercies for them and for "families and friends torn by grief" and prayed for God's love to also encompass "neighborhoods, the town, state, nation and world."

The Rev. Jane Sibley, visitation minister for the United Methodist Newtown congregation, offered a prayer for the first responders - local and state police who received standing ovations when they entered the high school auditorium before the memorial began.

Her prayer recognized those who responded when they were needed, asking God "to walk with them in the days ahead" and provide them with "people to listen to their stories."

Jason Graves of the Al Hedaya Islamic Center in Newtown, gave readings from the Quran and a young child, Muadh Bhavnagarwala, chanted a Muslim prayer.

John Woodall, a leader in the Baha'i faith community, gave a reading and prayer from his tradition.

Connecticut Gov. Daniel Malloy remarked on the faith evident at the service and in the community, calling it "a faith in which we are given the power to go on, to survive that which has befallen this community, these families, these spouses."

In his remarks, Obama said Newtown had inspired the nation.

The tragedy in Newtown eerily echoes the 1996 elementary school shooting in Dunblane, Scotland, where a gunman killed 16 children - 5- and 6-year-olds - and a teacher before killing himself.

The Rev. Kathleen LaCamera, a correspondent for United Methodist News Service in England, interviewed a surviving teacher and a parent of one of the young victims two years later. Many children were badly injured, including the physical education teacher, Eileen Harrild, who suffered a permanent injury to her arm. The injuries left teachers, students and parents psychologically and spiritually scared as well.

Both Harrild and Martyn Dunn, whose 5-year-old daughter Charlotte died in the Dunblane shooting, told LaCamera that letters received months and even years after shooting had provided comfort.

"It makes a difference if people write&ellipsis it helps to see that people do care, do think about you all over the world," Dunn said at the time.

The two took part in the Snow Drop Campaign, which successfully lobbied Parliament to outlaw all handguns in Britain.

In a message of condolence and support, the Rev. Olav Fykse Tveit, top executive of the World Council of Churches, praised the interfaith effort, commending all who "stand in vigil with those in pain."

He also could personally relate to the pain that the people of Newtown were experiencing.

A minister in the Church of Norway, Tveit was home last July when "a deranged gunman" stalked and killed youth at an island summer camp after planting a car bomb in Oslo. Seventy-seven died.

"In the aftermath, we Norwegians were shocked by the tragedy, yet we were moved by the way people of various beliefs came together," Tviet wrote in his message. "We were all too aware that evil and death are inescapably real. But we slowly came to appreciate the reality of life and love, as well."

Kathryn Lohre, president of the National Council of Churches, related as a parent, expressing her own "shock and the profoundest grief" and noting that such tragedies are "impossible" for theologians and clergy to explain.

Lohre pointed out that the National Council of Churches has been expressing its concern about gun violence for decades. A 2010 resolution called for a unified effort on the part of churches, government and individuals to address the problem.

Bill Mefford, United Methodist Board of Church and Society, is asking other congregations to join his own church, Culmore United Methodist Church in Virginia, in taking action after the Newtown tragedy.

He encourages congregations to write to the President, asking his support to "make gun ownership a more responsible process with universal background checks no matter where the gun is purchased" and "reinstate a vigorous ban on assault weapons."

*Bloom is a United Methodist News Service multimedia reporter based in New York. Follow her at http://twitter.com/umcscribe. Elliott Wright, a freelance writer and information consultant for the United Methodist Board of Global Ministries, contributed to this report.