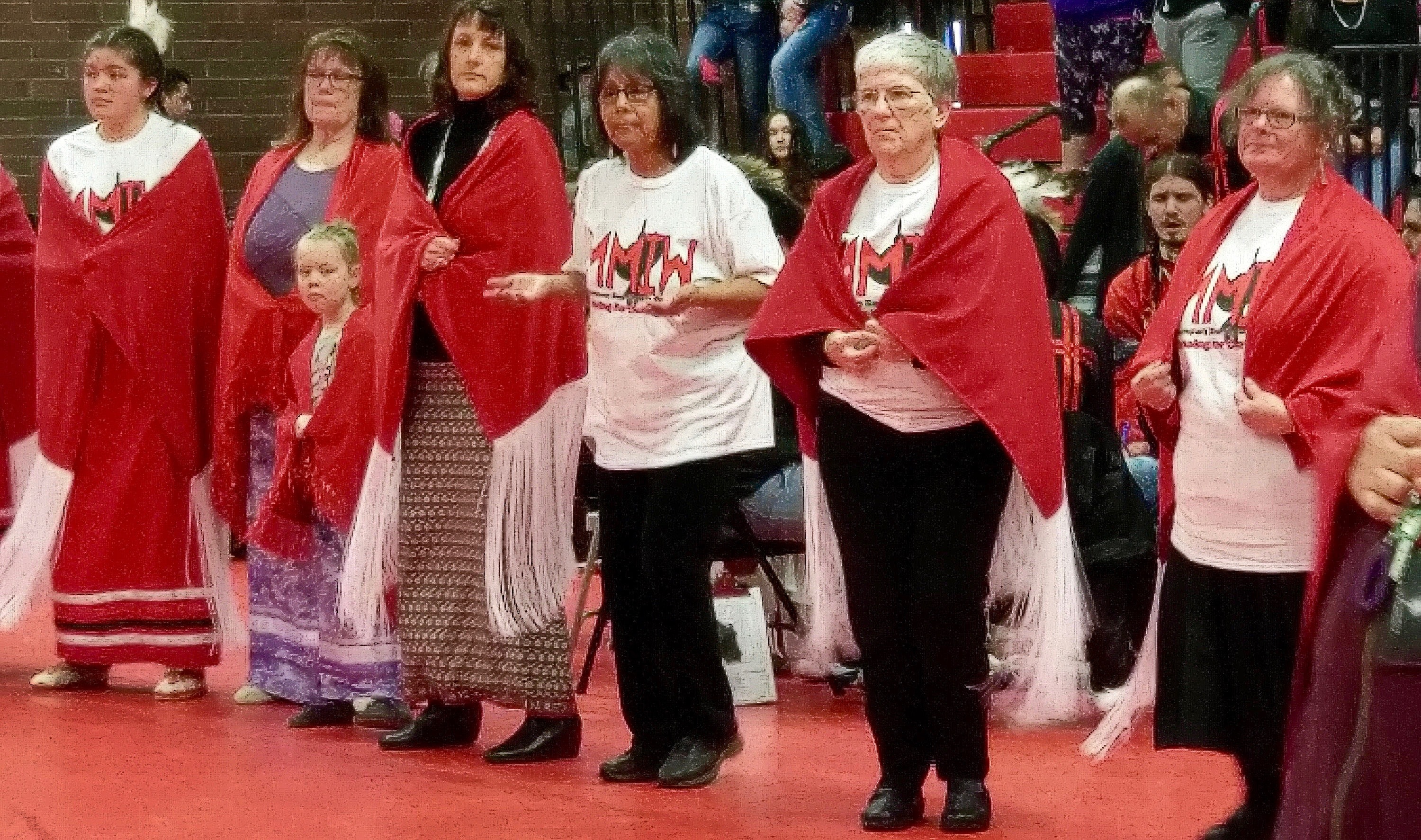 Women from Morningside United Methodist Church in Salem, Oregon, wear red shawls they helped to create during a dance to honor murdered and missing indigenous women at Chemawa Indian Boarding School. Photo by A. Wolf.
Eva Johnson, a member of Morningside United Methodist Church, knew exactly what to do with a $500 district grant challenge to create new places for new people.

She asked her church council to reach out to Salem’s Chemawa Indian Boarding School, the oldest continuously operated boarding school for Native American students in the United States. The school, which dates back to the 1870s, serves students from Oregon, Alaska, Arizona, Montana and surrounding states.

“I have hoped for some time that The United Methodist Church would connect with students at Chemawa Indian School,” said Johnson, co-chair of the Oregon-Idaho Conference’s Committee on Native American Ministries. She is a tribal member of the Klamath/Modoc nation in southern Oregon and both of her children attended Chemawa.

She learned that the students needed help with a project to bring awareness about missing and murdered indigenous women.

“The students asked for support to create 50 red shawls to use during the school’s birthday powwow,” Johnson said.

Students from the school were invited to give a presentation about their project to the administrative board of Open Door Churches, which includes Morningside and five other area United Methodist churches. The Open Door Churches share pastoral resources, volunteer together, host vacation Bible school, study together during Advent and Lent, and provide a community for young adults.

The Chemawa students shared report findings from the Urban Indian Health Institute that stated eight out of 10 Native women will experience violence in their lifetime; many of the cases are unreported. On some reservations, indigenous women are murdered at a rate more than 10 times the national average.

“Of course, all the churches in Open Door wanted to support the students in some way,” said the Rev. Wendy Woodworth, pastor at Morningside United Methodist Church. “We didn’t want to just write a check; we wanted to take steps to have more of a presence.”
Nearly a dozen members from the Morningside congregation took their sewing machines and skills to the school for a series of sewing days. The students demonstrated what a shawl should look like and the women worked with them to fulfill their vision.

“The sewing days were an example of intergenerational and culture exchange,” Johnson said. 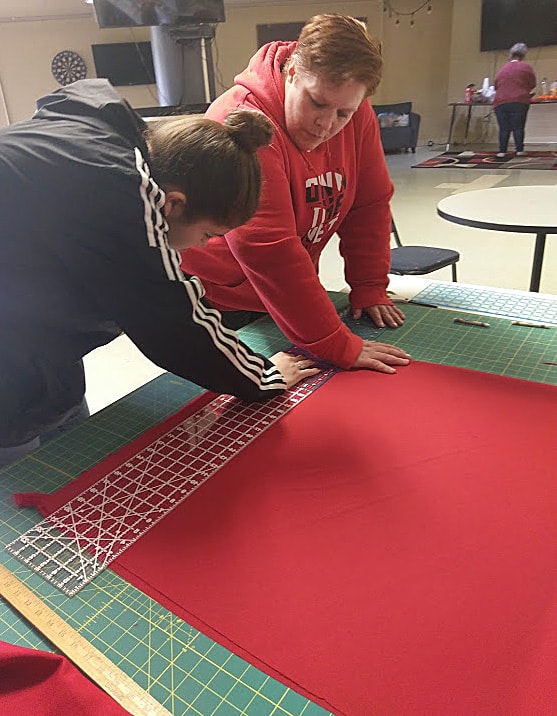 Red fabric is carefully measured as a first step in sewing a red shawl to honor murdered and missing indigenous women at Chemawa Indian Boarding School in Salem, Oregon. Photo by A. Wolf.
The finished shawls were presented at Morningside and blessed with sweet grass by a Native spiritual leader. Woodworth delivered the prayer.

On Feb. 23, along with their sewing partners from Morningside United Methodist Church, the students wore the shawls at the powwow as they offered prayers and a dance in honor of missing and murdered indigenous women.

“This has helped to begin the process of bringing justice and healing to our people,” said Mabel Brisbois, 15, a sophomore at Chemawa Indian School. “We really want to thank the congregation for their unconditional support.”

In addition to the shawls, the Open Door Churches donated $2,400 and the Committee on Native American Ministries contributed $1,500 to the school. The students plan to hold a workshop focused on healthy relationships and self-defense training on campus.

“The $500 district grant helped to trigger our conversation with the students at Chemawa, but so much was given in addition to that amount that we plan to apply the grant to our next steps in building Native ministries,” Woodworth said.

Rowe was an important writer on Methodist history, seeking to include marginalized groups, and gave crucial help to other scholars as a professor, librarian, archivist and bibliographer.
Theology and Education

Longtime Perkins School of Theology professor never shied from a debate but maintained friendships across the theological divide.
Church History