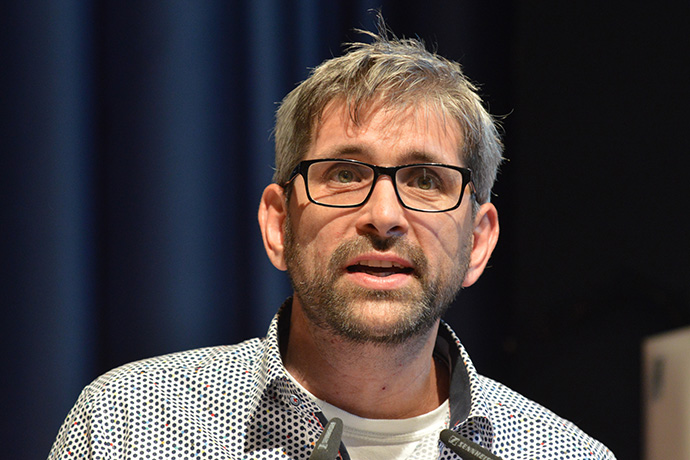 The Rev. Stefan Schörk, who granted asylum to an Iranian man in his church in Pegnitz, Germany, in January, has been fined for “aiding and abetting unauthorized residence.” The United Methodist pastor said he is disappointed with the verdict but hopes it provides an opportunity for changes regarding church asylum in the state of Bavaria. Photo by Klaus U. Ruof, UM Communications Germany.

In January, the Rev. Stefan Schörk granted church asylum to a young man from Iran in his church. Now, he faces a penalty of 1,500 Euros (more than $1,700 U.S.) for “aiding and abetting unauthorized residence,” a sentence upheld in a Nov. 8 hearing by the Bayreuth District Court.

The United Methodist pastor, who is responsible for congregations in Pegnitz and Bayreuth in Upper Franconia, had already accompanied around 30 such church asylums and said he adhered to the usual rules of procedure in this case, notifying the relevant state, church and other authorities of the asylum.

The pastor, who has served in Upper Franconia, a region of the state of Bavaria, for 15 years, received a 1,500 Euro fine (100 Euros per day for each of 15 days of asylum granted) plus a “warning with reservation of punishment” at the court hearing.

That sentence entails two years of probation, during which time the pastor may not be guilty of any further offenses in the same matter, lest further punishments be applied.

The judgment, however, is not yet final. Both parties have one week to appeal. The church asylum granted to the young man "was urgently needed because there was an official failure," Schörk explained in a television report on Jan. 30.

Ten days earlier, he had granted the young man church asylum in the church building of his congregation in Pegnitz, about 60 kilometers northeast of Nuremberg. The well-integrated and almost fluently German-speaking man was to be “separated from mother and sister in the middle of the COVID pandemic and deported to Greece.” Schörk said he felt called to act.

The church asylum has long since ended. Recently, however, the pastor received mail with a summons to the Bayreuth District Court on the charge of “aiding and abetting unauthorized residence.”

The Rev. Stephan Reichel is an expert on the issue of church asylum. He said the Federal Administrative Court has “long since” decided that “church asylum does not justify refugee status.”

Until 2017, Reichel was church asylum coordinator of the Bavarian regional church. He now travels throughout Bavaria as chairman of the association “matteo — Church and Asylum” to help congregations in their contacts with people threatened with deportation.

The pastor said he supports his United Methodist colleague.

Church asylums such as the one in Pegnitz are duly reported and respected and tolerated by all German interior ministers, Reichel explained in a press release about the current indictment of Schörk. In addition, there is also an “agreement between the churches and the Federal Office for Migration and Refugees.”

Currently, there are pending proceedings before courts in Bavaria in three similar cases, said Schörk. Asylum is about the fundamental question of “whether the freedom to act on the basis of one's own Christian convictions has more weight than the law that I violate,” he said.

Therefore, a judgment has far-reaching consequences. The acquittal of a Catholic nun in a similar procedure is currently being reviewed on appeal based on a public prosecutor's objection. For this reason, Schörk’s lawyer had expected that the proceedings against him would also be postponed until clarification at a higher level.

“The state wants to criminalize us, even though it is about help in exceptional situations, in absolute emergency situations,” Schörk said. “I am inwardly guided by my conscience and cannot at all act otherwise in my responsibility.”

He said the tendency toward criminalization is increasing.

“I'm disappointed with the verdict; I can't hide that entirely,” Schörk said immediately after the trial. However, he said, it provides an opportunity for change.

“There is an urgent need for a new agreement between church and state,” Schörk said. Perhaps the verdict is “reason enough to take further steps here.”

Before the verdict becomes final, Schörk and his lawyer have one week to review the verdict and, if necessary, lodge an objection. Because the judge reduced the sentence required in the lawsuit from 3,000 Euros to 1,500 Euros, the public prosecutor's office also could appeal, said a spokesman for the Bayreuth District Court.

The next step would be a higher court judgment from the Bayreuth Regional Court. In the event of an appeal, the judgment of the lower court remains suspended until a new hearing date.

Bishop Harald Rückert, who leads The United Methodist Church in Germany, supports Schörk's pastoral care by means of church asylum in an emergency situation and thanks him and his congregation “from the bottom of my heart for their extraordinary, prudent and courageous commitment to refugees.”

The verdict called into question the “already very narrow framework" in which church asylum was tolerated by the state as a last resort for protection and assistance, he said.

“The fact that people are criminalized if, after careful consideration and consultation, they grant church asylum to others in an extreme emergency situation must not go unchallenged,” Rückert said.

Before his court date, Schörk said he wasn’t worried about himself. He said he knows his community and church leaders, including the bishop and the superintendent, are behind him.

“What worries me is the signal effect that a verdict will have,” he explained, especially for church asylum in Bavaria. He said many of the persons and congregations who are willing to grant church asylum will follow the procedure very closely.

“That's why I already feel a certain pressure,” the pastor said, adding that it helps that he knows that many carry and support him in prayer.

There is “a great power” in this, he said.

Ruof is a communicator of The United Methodist church in Germany.

At the 11th General Assembly of the World Council of Churches, around 3,000 participants from 120 countries met to discuss the future direction of ecumenism.
Social Concerns

The United Methodist Church supports workers' rights in a heritage that goes back to early Methodism in England.