The national lockdowns imposed to counter the spread of the coronavirus in many African countries have created a fertile ground for violence against women and girls.

United Methodists across the connection are speaking up for abuse survivors and encouraging others to do the same through various church campaigns and training.

“For many women and girls, the threat looms largest where they should be safest: in their own homes. … We know lockdowns and quarantines are essential to suppressing COVID-19.  But they can trap women with abusive partners,” said the United Nations Secretary-General Antonio Guterres in a video message.

Media reports from South Africa indicate about 2,300 reports of gender-based violence were made to the police during the first week of the country’s lockdown in March. The surge in violence has continued with President Cyril Ramaphosa declaring it “another pandemic that is raging in our country.”

In a June address, he said he is appalled at the “war being waged” against women and children. “At a time when the pandemic has left us all feeling vulnerable and uncertain, violence is being unleashed on women and children with a brutality that defies comprehension,” he said.

Zimbabwe also is seeing a sharp increase in cases of violence as the pandemic continues to disrupt lives and economies.

“An activist organization, Musasa Project, said they received an increase in calls of 2,768 of (gender-based violence) cases between March and July 2020, resembling an increase of 70% as compared to same time last year,” said the Rev. Taurai Emmanuel Maforo, an online counselor and communicator for the Zimbabwe Episcopal Area.

The United Methodist Board of Church and Society continues to conduct awareness training on gender-based violence on the African continent.

“(Gender-based violence) workshops and trainings have been part of every Social Principles training we have held in Africa since we started doing this work at least 15 years ago,” said the Rev. Neal Christie, who directs the agency’s educational opportunities. 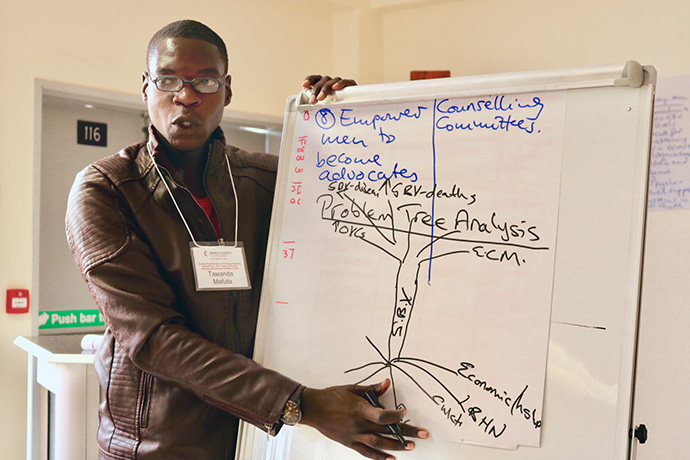 “Since COVID-19 started, we have been working with the Ujamma Center in South Africa to produce four contextually based Bible studies that address the root causes, the direct impacts and the concrete interventions persons and congregations can take to name, prevent and respond to GBV. This contextually based Bible study will be for use by local churches in Africa,” he said.

Since April, Christie has been meeting each week via Zoom with a group of international students at Africa University to discuss section by section the revised Social Principles, which will go before the 2021 General Conference.

“Perpetrators seek out the vulnerable with impunity. This requires massive public awareness, from schools to churches to the business sector,” said Christie. “It means that we stop blaming women and children who are victims and survivors. It means we listen to their stories. It means holding perpetrators accountable through transparent jurisprudence. It means addressing legislation that does not affirm rights of women and children and putting community safeguards in place to ensure physical, emotional and spiritual health and security.”

In Mutare, Zimbabwe, The United Methodist Church together with other denominations is participating in a campaign titled “Sasa!,” urging communities to speak out against gender-based violence and report it when it happens. Sasa is a Swahili word meaning “now.”

“Churches are encouraging the victims to speak out against violence as soon as it occurs. Keeping quiet about the violence will allow it to continue,” Gaga said.

“The church is giving love and support to the victims and survivors of (gender-based violence). It is the duty of the church to make the victims feel loved and worthy. The victims must never feel dirty, useless or to be blamed for the abuse,” he said. “The safety of the victims comes first and churches help in making sure that the victims are safe from further violence.”

Pastors are providing pastoral care and counseling and referring them victims to other organizations that can assist them, such as the police Victim Friendly Unit, Musasa Project and the government’s department of social welfare.

“The church is also teaching members about the negative effects of (gender-based violence). This is to help the survivors of abuse not to become abusers themselves. Usually the abused can also become an abuser and the church wants this to stop.”

Violence against women and young girls has long been a problem in Congo due to the country’s armed conflicts. The lockdown and closing of schools has exacerbated the problem, putting more young girls at risk of sexual violence.

According to Christelle Vuanga, the national deputy and president of the Human Rights Commission, hundreds of girls are raped every week in Kinshasa, the country’s capital.

“We noted a clear increase in cases of rape in Kinshasa. Often these rapes are committed on children between 10 and 15 years old, and it happens either in family — i.e., committed by uncles, cousins — (or) in community settings or on farms,” said Vuanga, who noted the recent case of a 13-year-old girl who was allegedly raped by a 45-year-old neighbor in the common bathroom area. 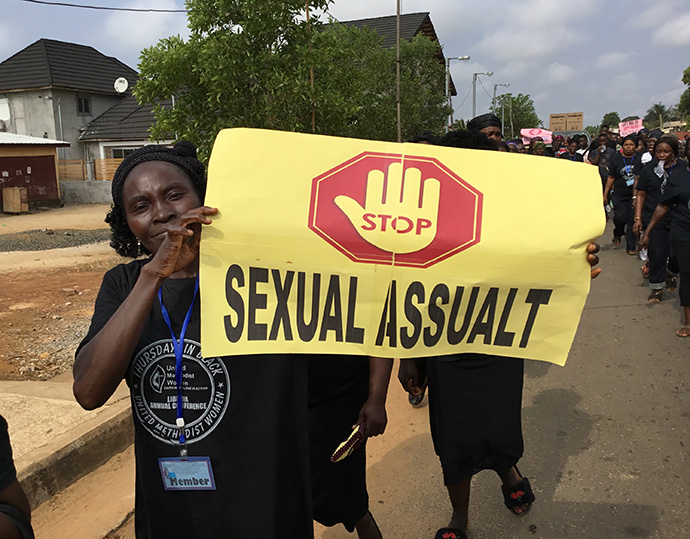 A woman holds a sign calling for an end to sexual violence against women and girls in Liberia. File photo by E Julu Swen, UM News.

Among the first people to call for action was Denise Nyakeru, wife of Congo President Félix Tshisekedi. In a statement to the media, Nyakeru stressed that most cases of violence go undocumented. “The home has become for some women a place of violence: a double penalty for our heroines who also face COVID-19,” she said.

Dr. Marie-Claire Manafundu, director of the Mama Lynn Center in Kindu, encouraged witnesses and victims of these acts to denounce them.

The center — built by The United Methodist Church in East Congo with support from the California-Pacific, Memphis and Tennessee conferences — is a place of refuge that empowers women survivors of sexual violence by teaching them professional trades to become self-sufficient and ensure their socio-professional reintegration.

“One of the effective ways to combat all forms of violence is denunciation. We must break the silence. If you are victims or you have witnessed any form of violence, you must have the courage to speak out, so that the one who committed this act can be punished. This may ensure that others cannot also commit violence against women,” said Manafundu.

East Congo Bishop Gabriel Yemba Unda urged church members to focus on love to get through these difficult times.

“This should not be an opportunity for men to demonstrate force toward their wives or young people and vice versa. This is the time when families need to spend time together and reflect on their future,” he said. “We must seek to stay united, to forgive and protect each other in our families. … We have to love each other so that together we can go through this time without much worry.

As rape cases spike during the COVID-19 lockdown in Liberia, the Board of Church and Society and the human rights department of the church are collaborating to fight sexual violence.

According to Jefferson Knight, head of the church’s human rights department, sexual violence against women increased by 50% within the past four months. “Instead of nine incidences monthly before the pandemic, we are now experiencing 18 incidences per month.”

Knight said the increase is due to the lockdown and state of emergency, which required law enforcement officers to pay more attention to health protocols than other violations.

He said Church and Society contributed $2,000 toward the department’s efforts to engage the government to prosecute perpetrators, while at the same time offering psychosocial support to victims.

He noted that one challenge for his office is parents who refuse to cooperate.

“Parents and the police will always compromise these cases to the disadvantage of the victims,” Knight said. “The United Methodist Church in Liberia is intensifying its public information-sharing process by encouraging parents not to shield perpetrators from getting their just punishment.”

The president of United Methodist Women in Liberia, Muriel V. Nelson, said the law is not on the side of the rape victims.

She recounted the experience of a 15-year-old girl who allegedly was raped by two men, one a police officer who has yet to be located.

Nelson said that United Methodist women in Liberia do not want to limit the fight against sexual violence to only “Black Thursdays,” speaking of the global initiative launched by Ecumenical Women at the United Nations to end sexual and gender-based violence.

“We want to be involved in the lives of the victims by providing psychosocial support and team up with the government to ensure that laws against rape are enforced without favor,” she said. “We need to mobilize resources to create structures that will house the victims for treatment while we are advocating for fair justice for both victims and perpetrators.”

Chikwanah is a communicator of the Zimbabwe East Conference. Communicators Chadrack Tambwe Londe and E Julu Swen contributed to this report.

Funds from the United Methodist Committee on Relief’s International Disaster Response program helped purchase food and other supplies for people in Beni who have fled attacks in outlying areas.
Global Health