A major fundraising campaign and an assessment of the vitality of Black congregations are central to a plan released by the new top executive of United Methodist Strengthening the Black Church for the 21st Century.

“In the next 18 months, our goal is to raise between $250,000 to $300,000,” said the Rev. Michael L. Bowie Jr., the former senior pastor of St. Luke Community United Methodist Church in Dallas. His appointment as national executive director of SBC21 was announced March 1. 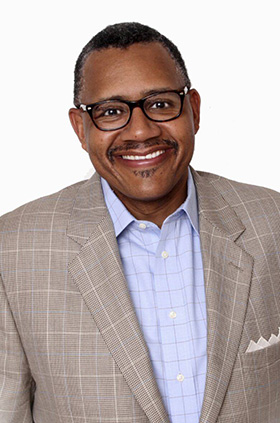 The Rev. Michael Bowie, national director of Strengthening The Black Church for the 21st Century. Photo courtesy of Discipleship Ministries.

Bowie said his first fundraising conversations already have happened with “large church pastors” interested in eradicating systemic racism in the world and within the denomination.

“We’re battling, I would say, two viruses: a virus COVID-19 and a virus of systemic racism,” Bowie said. “It’s important and urgent that we as the Black church and Black community begin to speak to the boldest oppression that’s out there right now.”

Like many events during the age of the coronavirus, the Young Adults Leading in Transformation conference has been reimagined this year as a virtual event.

The annual networking and informational summit is held to recruit African American and racially diverse young adults as they discern God’s calling for them. It is organized by Strengthening the Black Church for the 21st Century, a national racial ethnic plan of The United Methodist Church.

This year’s event has been dubbed the Transformation Virtual College Tour, and will feature speakers and virtual tours of higher education institutions. Thirty-five colleges and universities will participate, including Gammon Theological Seminary, Perkins School of Theology and Wesley Theological Seminary. The in-person event is tentatively scheduled to return in 2021.

“This virtual experience will hold true to its purpose — to inspire, teach and create an atmosphere for young adults to discern their call and to equip them for leadership,” said the Rev. Michael L. Bowie Jr., national executive director of SBC21. “What I am most excited about is our goal for this content and inspiration to reach young adult clergy, leaders and lay from across the connection.”

Virtual events are scheduled for Sept. 10, 11, 17, 24 and 25. VIP registration is $35 to attend all virtual stops and students can register at the Leading in Transformation website.

Keynote speaker Eric Thomas will speak on all five dates. He has written two books, “The Secret to Success” and “Greatness Is Upon You.”

Other speakers include Alexis Brown, chaplain of the Howard University-Wesley Foundation; Dominique Ayesha Robinson, dean of chapel at Wiley College; Jenny Phillips, senior technical adviser for environmental sustainability at the United Methodist Board of Global Ministries; and the Rev. Jeremy L. Williams, theologian and author of “Wireless Discipleship: Investing in a Strong Connection to the Source of Everything.”

Bowie said it’s important to “strike while the iron is hot” on the issue of police brutality.

“How does the Black church begin to speak and have a relevant voice during this era, during this season?” he said.

“When I first got in this seat, it had recently come out (about) the deaths of George Floyd, Breonna Taylor and Ahmaud Arbery,” he said. “So a lot of things have been happening and I was really in prayer.”

Bowie wants SBC21 to be a relevant voice on racial issues, because he believes the Black Lives Matter movement is filling a gap abandoned by the Black church.

● Developing an assessment to determine the vitality and health of African American congregations;

● Listening to bishops and annual conferences to determine immediate needs that SBC21 can assist with in fulfilling their mission;

● Revamping its website with relevant resources that SBC21 will curate and produce with the help of United Methodist partners including Discipleship Ministries, United Methodist Communications, The Upper Room, the Board of Church and Society and Board of Global Ministries;

● Launching a two-year fundraising campaign to support churches by offering grants and scholarships for innovative ministry; and

The Rev. Emanuel Cleaver III, senior pastor of St. James United Methodist Church in Kansas City, Missouri, has been friends with Bowie since they were roommates at Saint Paul School of Theology in Leawood, Kansas. They are part of a loose group of United Methodists who call themselves “Shift 180.”

“We’re trying to bring a change in church and in society,” Cleaver said. “So we call ourselves Shift 180. I think there are eight of us.”

He said Bowie is “the perfect fit” for the SBC21 post, noting his life experiences, education and knack for mentoring both his peers and younger pastors.

“But especially the experiences he’s had in churches make him the perfect fit,” Cleaver said.

“I think he has a good working knowledge of the different types of churches and (has) seen where, as a whole, the church — in particular the Black church — needs to go and can go,” Cleaver said. “He’s always been a visionary looking to see where we need to go and how we need to get there.”

Bowie said Black churches “can be one of the leading catalysts and agents for change in this denomination.”

“I believe that when the Black church is strong, United Methodism is stronger,” Bowie said.

A group of leaders from the Methodist Church of Mexico and The United Methodist Church traveled to southern Mexico in April to meet with groups working with immigrants crossing into the country.
Worship