The project also involves research to evaluate the persistence of the Ebola virus in the ocular fluid. This could help determine why so many Ebola survivors require eye surgery, Dr. Jessica Shantha, an ophthalmologist and Emory eye team member, told United Methodist News Service. Emory University is a United Methodist-related institution and the eye center is part of the university’s School of Medicine.

About a quarter of Ebola survivors have eye problems and 40 percent of those have severe vision impairment, according to Dr. Steven Yeh, another ophthalmologist from Emory involved in the project.

Dr. Moges Teshome, an ophthalmologist employed by the blind mission at Gess Hospital, said the Emory staff became interested in Ebola research after they treated a doctor who caught Ebola in Sierra Leone. Dr. Ian Crozier, an infectious disease specialist, survived Ebola but was later found to have the virus in his eye.

The partnership began in April 2016.

“The first phase was to screen Ebola survivors, identify those with cataracts, then we took a sample of fluid from the eye and sent it to Emory for laboratory analysis. That phase, which we called ‘tapping,’ went well. All the 22 candidates’ results turned out to be negative – implying that the survivors no longer had the Ebola virus in the eye,” Teshome said. 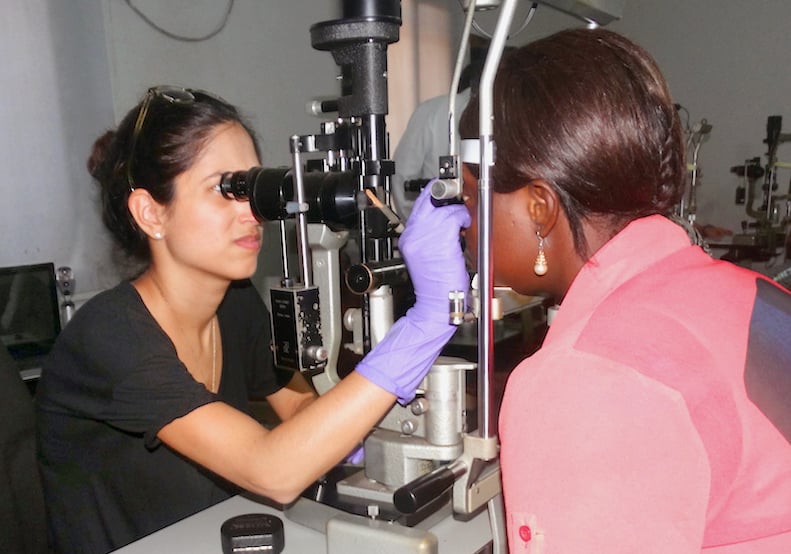 The second phase involved cataract removal and placement of an artificial lens in the eye. Teshome said Emory is providing part of the financing, personnel, education and equipment for the program.

“All the children are very happy; their visual acuity is more than 90 percent. We have changed the lives of the children. Now we are planning to go ahead for the second group. We are screening and will do the cataract operation. Our primary interest is to remove the cataract, which is a common eye disease among Ebola survivors,” Teshome said.

Shantha and Yeh from Emory have travelled back and forth from the U.S. to Sierra Leone since the program began.

“It is kind of devastating, the effects the virus has had on people’s lives,” Shantha said.  “We started a small pilot study with 22 patients. Sixteen patients had eye surgery. So we want to make sure that we can support the other patients that have cataracts.”

She said the idea is to expand the program to support the health systems in Freetown and connect with the complex issues Ebola survivors are having because a lot of them have uveitis, a form of eye inflammation.

“We are trying to encourage all survivors and trying to provide the best care we can,” she said. Emory provides technical guidance, education of eye-care service providers, study design and development.

Emory also provides transportation for survivors from their different locations around the country when they have to come for check-ups at the eye hospital. In the past, survivors had complained they couldn’t afford transportation since many lost their jobs after they caught Ebola.

Yeh said doctors are continuing to learn more about the natural history of Ebola survivors.

“It is important that our scientific education drives the care of patients. Research is important; very, very important part of what we do. Our research is dealing with Ebola virus persistence,” Yeh said.

Mohamed B. Mansaray, the National Secretary General for Ebola survivors, is the liaison officer who connects survivors to opportunities around the country. Mansaray, himself an Ebola survivor, put 18-year-old Alex Koroma in touch with the Emory team.

Koroma, who attends Dr. David Arnold High School in eastern Freetown, said his deteriorating sight was becoming a source of fear and embarrassment for him at school.

“When we initially reported, the team told us they were doing ‘tapping’ which we later understood to mean screening the eyes to be sure there were no Ebola virus around the eye. They collected fluid samples for laboratory tests in the U.S.,” said Koroma, who lost 20 family members and neighbors to Ebola. Once he tested negative for Ebola, he was eligible for the surgery.

“I was called the following week and I had a very successful operation. My vision now is by far better than what it used to be,” Koroma said.

“I and my other brother who survived have eye problems.  Mine was worse, I had cataracts and had to do an operation after screening. My sight is good now. Only that my eyes ache when I study for a long time,” Sesay said. “I’d have to stop, apply eye drops before I am able to continue. I am grateful for services received at the Gess Eye Hospital,” he said.

Jusu is director of communications for The United Methodist Church in Sierra Leone. News media contact: Vicki Brown at (615) 742-5470 or [email protected] To read more United Methodist News, subscribe to the free Daily or Weekly Digests.