• The Sierra Leone government’s Free Quality School Education initiative is affecting most of the 350 United Methodist schools in the country.

• While school rolls around the country have grown and teacher salaries have increased, some teachers and administrators have mixed feelings.

Since then, school rolls have increased, with the government providing textbooks, tuition, school buses and subsidies for school administration. Teacher salaries have increased by at least 40%. Children of teachers who have taught for 10 or more years qualify for scholarships that fund their education up to university.

There are more than 350 United Methodist schools in Sierra Leone, with the majority of them assisted by the government and affected by the free education initiative.

“Free education,” said Isatu Peacock, principal of Harford School for Girls, “has positively impacted lives. We see more girls coming to school because parents are not being asked to pay fees, which used to be a challenge.”

Children in government and government-assisted secondary schools are loaned textbooks for core subjects. Parents can provide books for other subjects.

“We are seeing a remarkable change from where we were previously to where we are now,” said Moinina Sengeh, the country’s education minister for basic and senior secondary education, in a radio interview.

“We have done all of what we promised in our election manifesto on education governance,” he said, citing depoliticizing education committee boards, training school management committees and hiring quality-assurance monitors. 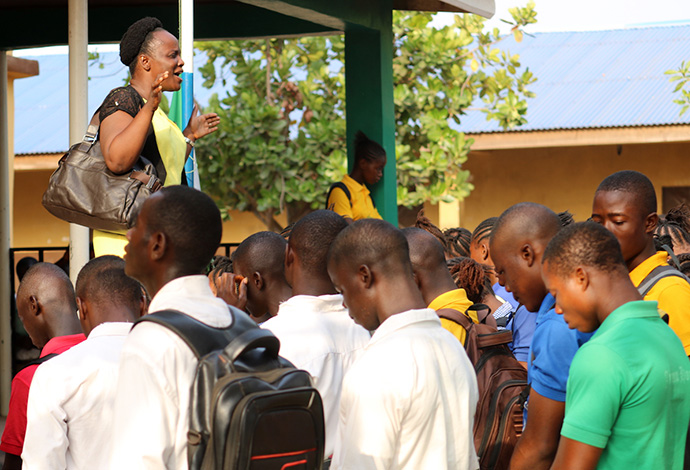 However, the implementation of the program has left some United Methodist school administrators and teachers with mixed feelings.

Kai Jimmy, principal of Koidu Secondary School, a United Methodist school in the diamond-rich Kono District, said the government pledged to add more buildings to schools in order to accommodate the expected influx of new students. But his school is yet to benefit.

“Our school is the only school with an equipped science laboratory,” he said. “It attracts a lot of students, but we cannot accommodate all students who apply.”

Jimmy struggles to maintain an ideal learning atmosphere. Seventeen hundred students squeeze into limited space, with an average of 80 students per class. Although Jimmy is constructing a six-classroom structure, meager resources slow completion. He hopes to reduce class sizes when the new building is complete.

“Free education,” he continued, “opened the door for the underprivileged whose parents could not afford fees. Even those who had left are returning to school, making the learning environment overcrowded. But some others don’t even value free education. As long as they are not paying, they don’t value it.”

Jimmy said some parents refuse to take or collect the government-loaned textbooks because students must pay for damage or loss. He said some teachers were demanding money where pupils are not supposed to pay, some compromising standards because they have been bribed.

The free education policy is implemented only in government and government-assisted schools. Proprietors of private schools fund the running of their schools, and students pay admission, tuition and other charges.

At the United Methodist Secondary School in Njagboima, Bo, teachers complained about regularization of their status. Although some graduated years ago, their salaries do not reflect their qualifications. Others were promoted but still receive salaries below their promotions. Some were recruited as new teachers but have now worked for years without salary because their names are not on the payroll.

The government introduced the educational initiative alongside the fight against corruption. Before, cheating on exams was commonplace. Students would protest, sometimes violently, if they were not allowed to cheat. Since then, the Anti-Corruption Commission, in swoop operations, has raided exam centers, homes and other locations where examinations are secretly conducted. Sometimes, students pay an agreed amount to be favored in exams.

Leonard Gbloh, education secretary for primary schools for the Sierra Leone Conference, said progress has been made in teacher recruitment, which once was a problem. Additional buildings have been constructed and school supervisors hired and empowered. The government has approved additional schools for government assistance; textbooks have been provided, and more children are attending school.

But Gbloh also contends that the government should go back to the drawing board if progress is to be made in actualizing quality education. Schools in remote rural communities are grossly understaffed, he noted.

“We still have schools in those communities that have just one qualified teacher,” he said. One way to encourage qualified teachers to serve such communities is to give them remote-area allowances. He noted that the free education package should be rolled out in phases since it is a capital-intensive project and the government is struggling with raising required funds.

“Government has started up well; we no longer pay fees,” said Sylvanette Tawah, a United Methodist parent whose children attend church schools aided by the government.

However, she said there are gaps in learning and the education process that must be filled, noting that parents often have to pay for extra classes.

“More needs to be done to ensure quality education in government-assisted schools.”

Heavy rains and strong winds wipe out classrooms, offices, a clinic and teachers’ residences in both East and West annual conferences.
Discipleship