During his years in South Korea, the Rev. George Ogle was referred to by many titles: missionary, evangelist, organizer, educator, father of Korean workers and poor people, and a strong advocate of the Korean democracy movement.

Ogle, whose Korean name was Myung-geol Oh, died Nov. 15 at the age of 91. Earlier this year, on June 20, the government of the Republic of Korea recognized him with the People’s Medal for his contribution toward Korean human rights and democracy. 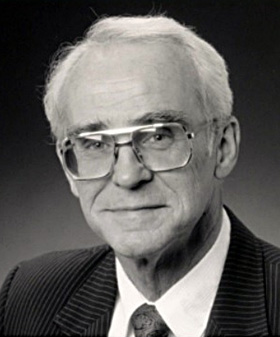 “He was an apostle of justice and a model who took the cross of Jesus Christ and lived faithfully to the call of Christ,” said the Rev. Kil Sang Yoon, retired from the United Methodist Board of Higher Education and Ministry.

Born on Jan. 17, 1929, in Pitcairn, Pennsylvania, Ogle was sent to South Korea in 1954, soon after graduating from Duke Divinity School and being ordained a pastor in The United Brethren Church.

At the time, South Korea was devastated by the Korean War. He taught English and preached the Gospel at Methodist schools in Gongju and Daejeon for three years.

The Rev. Sang-yoon Lee, chair of the Institute for Future Policy Studies of the Korean Methodist Church, remembered Ogle as “one of the missionaries who understood Korea better than anyone at that time.”

The American pastor realized there was a wave of industrialization in Korea in the 1950s, which forced thousands of young people from the countryside to urban areas. After he returned to Chicago in 1957, he prepared for a ministry that would engage these new workers.

Ogle also met Dorothy Lindman, who was working as a public health nurse for the Chicago Infant Welfare Society, during his U.S. stay. They married in 1959 and headed back to South Korea by freight.

A small thatched hut in Incheon, purchased by Ogle, became the home of Incheon Industrial Evangelism, which would evolve into the Urban Industrial Mission, the birthplace of the Korean workers movement.

In 1971, Ogle turned over leadership of the Urban Industrial Mission to the Korean people and moved back to the United States to finish his PhD in international industrial relationships at Wisconsin State University. After receiving his degree in 1973, Ogle returned to South Korea to teach at Seoul National University for five years.

At the time, there were endless protests by college students, pastors and professors over the Yushin Constitution, which codified the de facto dictatorial powers held by President Park Chung-hee. Protestors who made public, critical comments often were arrested.

During one Thursday prayer service for families of Christian political prisoners, Ogle spoke and prayed for eight young men who were falsely accused and sentenced to death in the People's Revolutionary Party. Due to these actions, Ogle was deported from Korea on Dec. 14, 1974. On April 9, 1975, 18 hours after the Supreme Court of Korea confirmed the sentence, the Korean government executed the young men. 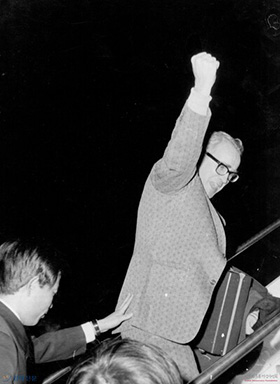 The Rev. George Ogle was deported from South Korea by Korean government on Dec. 14, 1974. File photo courtesy of the Korea Democracy Foundation.

“Ogle's deportation was a piece of living evidence that shows how far the Methodist mission had affected Korea,” said Lee, who observed the situation closely. “Ogle did not yield to dictatorship and stood up for the weak.”

Even after being deported to the United States, Ogle tried in various ways — including testifying at a U.S. Congressional hearing — to share the truth of the People’s Revolutionary Party case. But after hearing about the execution, he suffered unbearable pain.

“Even in the tense situation of being arrested and deported by the Park Jeong-hee regime, which used young people as scapegoats of the regime without evidence, Ogle did not lose the dignity of a Christian,” said Walter Butch Durst, former missionary to South Korea at the time. “He was a sincere and religious pastor who cherished deep love and interest for the Korean people in his heart.”

The Ogles moved Koreans’ hearts by sending their children to a school attended by ordinary Korean children. This was a symbol of how much they loved Korea.

Ogle taught at Emory University's Candler Seminary in Atlanta from 1975 to 1981. He then moved to Washington to serve as director of the Department of Social and Economic Justice for the United Methodist Board of Church and Society until he retired in 1991.

He visited Korea in 1984 as a guest speaker to commemorate the 100th anniversary of the Korean Methodist Church and in 2002 received the Human Rights Award from the Korea Democracy Foundation founded by President Kim Dae-jung.

One of his books  was “How Long, O Lord: Stories of Twentieth Century Korea,” published in 2003. The historical novel was based on his experiences with the Korean democracy movement, including the People’s Revolutionary Party case. The book was translated by the Rev. Jungrye Hahm in Korea.

“He was deported while working for my mother country, and it was the only way to express my gratitude,” said Hahm, when asked why she volunteered to translate the novel. “I learned the modern history of Korea through Rev. Ogle's perspective.”

The Rev. James Chongho Kim remembered Ogle as a person who stood out above all else.

“He was a man who really lived a real evangelical life,” said Kim. “Although he was a very handsome white man, he had a warm heart with humility like a Korean countryman. He practiced the Gospel and Christianity and tried to make a world he believed in. He showed us in life what the true shepherd and the pastor was. It was the grace of God that he was with us. He did not show off, so people don't know him well.”

Wisconsin Area Bishop Hee-Soo Jung said he was one of those influenced by Ogle and his Urban Industrial Mission.

“Ogle trained and equipped two outstanding Korean Methodist leaders, Rev. Seung-hyuk Cho and Rev. Hwa-soon Cho, and established a base for the Korean Methodist Church’s social mission,” said Bishop Jung. “He was a friend of the poor and workers.

Kim is director of Korean and Asian news at United Methodist Communications.

Contact him at 615-742-5470 or [email protected] To read more United Methodist news, subscribe to the free Daily or Weekly Digests.

In the first in-person annual gathering of the Association of Korean Churches in The United Methodist Church, several panelists questioned whether the church’s membership decline could be attributed to a lack of spiritual renewal and its long-standing conflict over homosexuality.
Mission and Ministry

Ask The UMC: How are United Methodists present in Ukraine

Methodism came to Russia in the late 19th century, and United Methodists to Ukraine by the end of the 20th century.
Evangelism