In 17 years as a police officer, the Rev. Gina Stewart found herself in some dicey situations.

“I never had to shoot my gun,” she said. “I did pull it numerous times.”

These days, Stewart is a part-time licensed local pastor, tending four small churches in lovely but hardscrabble Barbour County, where she grew up.

People ask how she could go from cop to pastor.

“My response is they’re not really so different,” Stewart said. “I’m just giving permanent salvation and permanent safety through God, whereas with law enforcement, it was human safety.”

Stewart, 46, recalls with fondness and gratitude her childhood attendance at Westside United Methodist Church in Belington, a Barbour County town. But what really excited her as a girl was the prospect of joining the police.

“I had nobody who was law enforcement in my family,” she said. “I just knew in my heart that’s what I was meant to do, even though women were not police officers.”

Stewart got a degree in criminal justice and found work with the Morgantown police department, serving first on patrol and later in public affairs. She never stopped loving the work, but a 2006 breast cancer diagnosis signaled the beginning of a period of health crises and operations that eventually caused her to take medical disability.

She had remained an active United Methodist, going on mission trips and serving as a certified lay speaker. In 2010, she became a part-time licensed local pastor, and was appointed to lead two small churches near Morgantown — Riverside and Granville United Methodist. 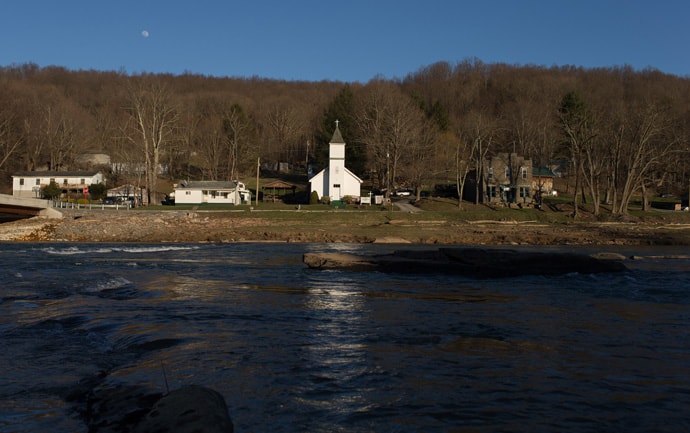 “I needed a purpose, and they gave me a purpose,” Stewart said.

When she finishes the first sermon, she heads out the door to the second church. Only one of the churches has a piano player, and two have outhouses. All four are in beautiful settings, and Arden is right by the rushing Tygart River.

Stewart is thrilled that one of her churches, Mary’s Chapel, has had a growth spurt, due to the one little boy who was a regular attendee deciding to invite his friends.

“They’re bringing their mothers,” Stewart said. “We don’t have their fathers yet.”

As much as Stewart would like to see her church buildings full on Sunday, she enjoys praying in them during the week when no one else is around.

And at Arden, she can leave the door open and hear the river.