• Before he resigned as bishop, Dorff helped lead the formation of what is now the Rio Texas Conference and shepherded various denomination-wide efforts including Imagine No Malaria.

• United Methodists remember him for his ability to bring people together.


James E. Dorff, a former United Methodist bishop remembered for his ability to bring people together, died June 7 after a three-year struggle with pancreatic cancer. He was 73.

As bishop, Dorff helped lead the formation of what is now the Rio Texas Conference — bringing together the formerly separate Southwest and Rio Grande conferences into a single, bilingual regional body.

Dorff, called “Jim” by his friends, also guided various denomination-wide ministries. He helped launch Imagine No Malaria — the United Methodist initiative to combat the deadly disease in Africa. He also served as president of the denomination’s Board of Higher Education and Ministry for nearly four years.

“He was the right person at the right time for that episcopal assignment,” said the Rev. Don Underwood, Dorff’s friend for some 50 years. Underwood is pastor emeritus of Christ United Methodist Church in Plano, Texas.

“It was really his wonderful reconciling spirit that made all of that possible.”

Both Underwood and Casad were among the South Central Jurisdictional Conference delegates who elected Dorff as bishop in 2008.

Before that, Dorff served in the North Texas Conference for 36 years taking on appointments as pastor, district superintendent and assistant to the bishop.

Because of his age, Dorff was scheduled to retire in September 2016. But in December 2015, he announced that he was voluntarily resigning as bishop and surrendering his clergy credentials. In his announcement, he admitted to violating his marriage and ordination vows. His resignation came after a complaint was filed.

“Our failures don’t define the totality of who we are or erase all the ways God uses us for good,” said Casad, who formerly was the executive of the denomination’s Connectional Table. “And I believe God’s word is a testament to that. That’s what I think of when I think of Jim.”

Amy Forbus recalled the steady support Dorff provided as district superintendent when her congregation was navigating a tough situation.

“But what I remember most about Jim was his kindness, and his willingness to seek to understand others’ points of view,” said Forbus, who is now communications director at United Methodist-related Hendrix College in Conway, Arkansas. 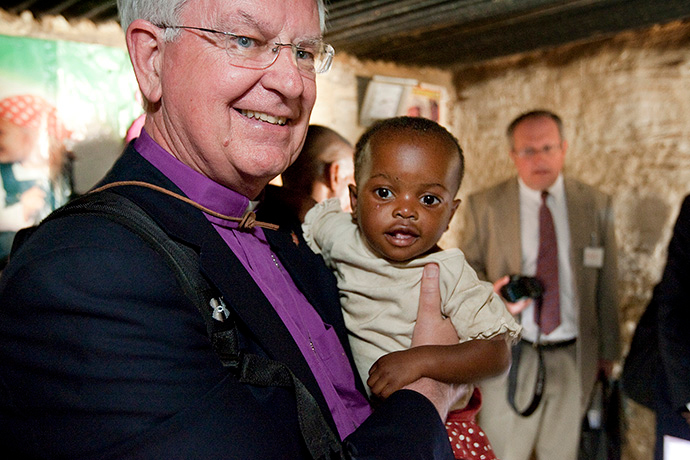 James E. Dorff, former bishop, holds 18-month-old Dunongo after her family received a mosquito net bought with funds from The United Methodist Church at their home in Lubumbashi, Congo in 2010. File photo by Mike DuBose, UM News.
Before his election as bishop, he and Forbus had several talks about Gen-X and the church.

“At one point, I lent him some resources that I saw as windows into my generation’s experience — my DVD of ‘Office Space’ and my copy of Shane Claiborne’s book ‘The Irresistible Revolution,’” she said. “He treated them as required viewing and reading. Jim was one to put in the work.”

When Dorff served as assistant to the bishop, he took on helping the North Texas Conference navigate through grief and transition.

“I didn’t really know the personality or ethos of the conference, but he did,” Norris said. “He knew everybody. He knew every church. He knew every political persuasion. Whenever I had a question, he was right next door, so all I had to do was holler. He was always Johnny-on-the-spot.”

Norris said if he had to be interim bishop again, he would want someone just like Dorff by his side.

As bishop, Dorff was assigned to the San Antonio Area, which encompassed two conferences dealing with different struggles. The Rio Grande Conference served burgeoning Hispanic congregations stretching across Texas and into New Mexico, but was financially unsustainable. The churches in the larger and largely Anglo Southwest Texas Conference were struggling to reach Texas’ growing Hispanic population.

In 2012, the South Central Jurisdiction approved the union of the two conferences, and Dorff took on the task of bringing clergy together across conference and sometimes-linguistic barriers.

He also championed the denomination’s shared commitment to fighting malaria. As a member of the Global Health Initiative Executive Committee, he led the former Southwest Texas Annual Conference in becoming the pilot project for the Imagine No Malaria campaign.

The campaign to raise $75 million formally launched with a celebration and free concert event at the State Capitol in Austin, Texas, on World Malaria Day, April 25, 2010.

“His presence and participation in the launch events in the Democratic Republic of Congo and in Austin, Texas, helped ignite awareness and commitment to the reduction of death and suffering from malaria in sub-Saharan Africa,” said the Rev. Gary Henderson, previously executive director of the Global Health Initiative and now United Methodist Communications’ chief relations officer.

“Because of his commitment and leadership, United Methodists were able to raise over $77 million in cash and pledges and support UM hospitals and clinics across the African continent.”

Another highlight of Dorff’s ministry was his tenure as president of the United Methodist Board of Higher Education and Ministry. But even before he took on that role, he encouraged the Rev. Kim Cape — then serving on the Southwest Texas Conference staff — to apply for the leadership agency’s top job.

Cape said that as the board president, Dorff “was a master at building consensus and taught me a lot.”

Now retired, Cape said she is grateful for his leadership, which among other things, made her a better chief executive.

The former bishop’s daughter-in-law Kate Irons Dorff posted on Facebook that he died holding the hand of Barbara, his wife for more than 45 years.

“Jim was a beloved husband, father, grandfather, pastor and friend to countless people around the world,” his daughter-in-law wrote.