The three and a half years that the Rev. Frances Helen Foley Guest spent with her Methodist missionary parents in a Japanese prison camp during World War II shaped her ministry for the rest of her life.

Guest — the first recipient of The United Methodist Church’s 75-year-old Crusade Scholars Program (now known as World Communion Scholars) — was a lifelong advocate for peace and justice, a tireless campaigner against racism and sexism and a mentor to young women involved in ministry.

Most significantly, her early experiences made her a storyteller, said her son. Ken Guest was collaborating with his mother on a book about her family’s mission work in Asia when she died Nov. 26 at 94.

She will be remembered during a Feb. 15 memorial service at the United Methodist Church of St. Paul and St. Andrew, where she practiced her unique brand of hospitality and made everyone — from the pastors to newcomers — feel at home.

“Frances Helen didn’t stop being a pastor when she retired. She kept that graciousness going,” said the Rev. James “K” Karpen, senior pastor, whose two children loved going to her apartment to hear some of her stories and have a “tea party.”

The story that defined the early part of her life began when Frances Helen’s parents — Walter Brooks Foley and Mary Rosengrant Foley — were assigned to Asia, first to India in 1926, at a time when political change was brewing. When they moved to the Philippines in 1935, Walter Foley served as pastor of the main ecumenical church in Manila, became involved with the Filipino independence movement and wrote against Japanese imperialism.

Once the Japanese occupied Manila, the secret police began to call at their home. Knowing the police would return, the family voluntarily checked into the Santo Tomás Internment Camp, set up at a Catholic university, and became prisoners of war.

Her parents helped establish a school, religious services and even a lecture series at the camp. “I was a witness to watching them create as much normalcy as possible in this terrifying situation and always to think positively,” Frances Helen recalled in a 1995 interview with United Methodist News Service. 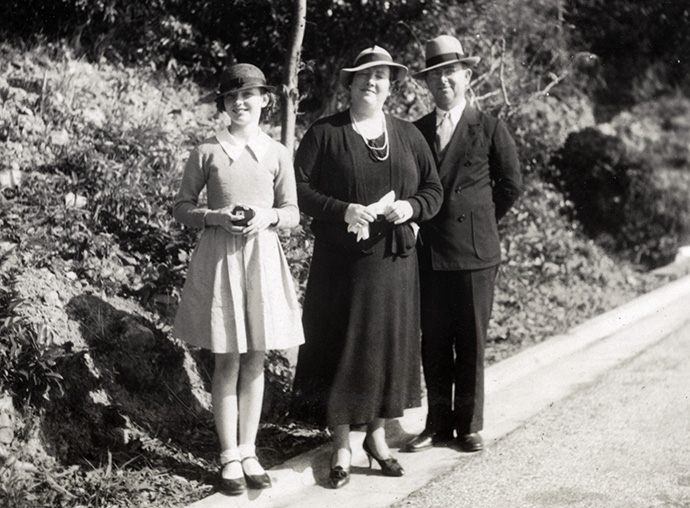 Walter Brooks Foley and Mary Rosengrant Foley, missionaries with the Methodist Board of Foreign Missions, are pictured here with daughter Frances Helen Foley in Hong Kong in 1937. File photo courtesy of Kenneth J. Guest.
And her parents made it clear, Ken Guest said, that the 18- and 19-year-old Japanese soldiers guarding the camp were not to become objects of hate.

Still, it was a difficult time and, in the end, people at the camp were dying of starvation. Finally, on Feb. 3, 1945, a U.S. strike force took over the university and ended the internment.

But the Japanese still held Manila and began bombing the American troops. Four days after the internment ended, a bomb fell directly on the Foleys’ room at the camp. Her father, 45, died from the blast and her mother, who nearly died, lost an arm.

Her son believes that storytelling became a way for her to deal with the trauma. “She created a set of stories that allowed her … to tell what had happened, but framed it theologically in a way that was about life, not death,” he explained.

The Methodist Board of Foreign Missions recognized her resilience and abilities by naming her the first Crusade Scholar in 1945, which allowed her to attend Dickinson College in Carlisle, Pennsylvania.

Despite the recognition, Frances Helen was discouraged from her desire to become a minister (women in the Methodist Church would not win full clergy rights until 1956). Instead, she settled in Florida with her schoolteacher husband, Thomas Lewis Guest, a fellow student at Dickinson.

Everything changed when Thomas Guest died unexpectedly at the age of 50 in January 1976. With her two daughters, Kathe and Sharon, out of the house, Frances Helen was determined to enroll in seminary. Accepted at Candler School of Theology, she moved to Atlanta with Ken, then 13, later that year.

She was 51 — much older than her classmates and even some of her professors, who offered no recognition of her years of lay experience and public speaking. Her son knew it was a struggle but was proud “of her and her courage to pick up and move on and follow a dream like that.”

The Rev. Pam Cahoon, also from Florida, was already at Candler when Frances Helen arrived. “She was old enough to be most of our mothers, but, boy, she was not like our mothers,” she said. While most of the female students were too timid to question their male professors, Frances Helen was not.

Together, the small number of Methodist clergywomen in Florida at the time — seven or eight compared to about 700 appointed male clergy — acted as a nurturing support group. The challenge was finding ways of living out the gospel fully in local churches that struggled over race and gender issues.

Frances Helen was the target of many messages of hate after her first appointment at a church in central Florida in 1979, Ken Guest said. After her death, he heard from a retired clergywoman, the Rev. Anne Godbold, who was pastoring a rural church then about 40 minutes away. Godbold had called Frances Helen, horrified, because a cross had been burned into her front yard, something his mother already had experienced.

Frances Helen immediately drove to her colleague’s parsonage. Godbold found her standing in the yard, laughing at the fact that whoever had burned the cross did not spell the accompanying message correctly.

“She had seen it all. She had seen war, she had seen people die around her,” her son said. “She had been in the room when her father was killed. These people with their crosses and hate messages were not scary to her.”

After she retired, Frances Helen entered a new phase of ministry when she moved to New York in 1991 to live near her son and became an integral part of St. Paul and St. Andrew. Peggy Griffin-Jackman — who shared a common bond with her as a former missionary kid — recalled that Frances Helen was the first to volunteer to join her to walk in New York’s Gay Pride Parade.

Retirement, Ken Guest believes, gave his mother even more of an opportunity “to live her ministry in her very full way.”

Ressie Mae Bass, a friend of nearly 40 years who knew Frances Helen first in Florida and later in New York, said that Frances Helen continued to fight for social justice in her later years. “She was not a radical person, but she was very intentional.”

As she had in Florida, Frances Helen continued to bond with younger women involved in ministry — even in the last couple of years, when she face limitations imposed by her advancing age. That is why her family plans to honor her legacy with a scholarship fund.

Ken Guest started hiring Union Seminary students to assist his mother with a few tasks and act as a conversation partner over lunch. It was beneficial both for Frances Helen, who “loved their energy” and the young women themselves.

Alyssa Kaplan, now serving as a Lutheran vicar in Baltimore, was one of those students. She spent time with Frances Helen until her own graduation in May 2019.

“Her vocation always seemed so clear to her and it helped me find clarity in mine,” Kaplan said. As an “out” queer candidate for ministry, she added, the stories of resistance she heard from Frances Helen’s own experiences were inspirational. “She knew what she was called to do and that she was going to make her way forward.”

The Rev. Lea Matthews, associate pastor at the church, called the intersection of her life with Frances Helen’s “one of those tremendous gifts of total happenstance.”

Even as she inspired others with her stories, Frances Helen was asking them about their own lives. In a way, it was almost as if the story wasn’t finished, Matthews said, “and it was our duty and our honor” to finish it.