A $15,000 Ebola response grant from the United Methodist Committee on Relief has made Christmas a lot brighter for 350 families in the Topoe Village, outside of Monrovia, with the distribution of much needed food.

“This is going to make my Christmas better,” said Soko Kanneh, one of the recipients of a month’s ration of rice, fish, beans, salt and vegetable oil.

Mammie Myers, a pregnant woman, walked away with a 25-kilogram (55-pound) bag of rice on her head. “It came on time, thanks to the church,” she said of the food. 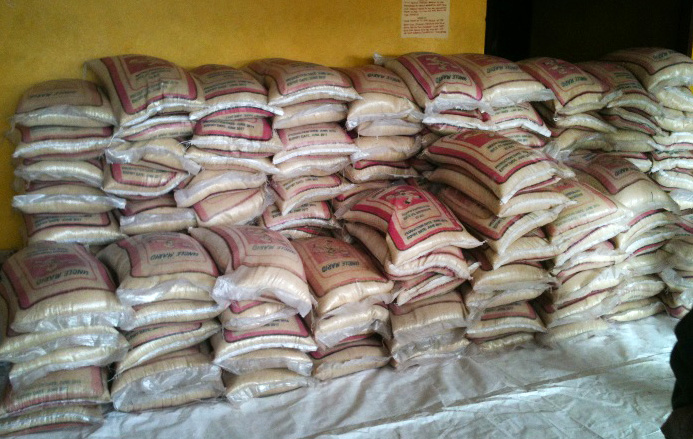 The stock of rice before the distribution at the Henri Wilmot Dennis United Methodist School. Photo by Julu Swen, UMNS.

Mary Zigbuo, a United Methodist missionary, watched and followed when Mardee Kpoo, 78, and her sister and three great-grandchildren walked home with their provisions. One of Kpoo’s 11-year-old great-granddaughters balanced a bag of rice on her head.

“I could tell this little one was accustomed to carrying large loads atop her head,” Zigbuo said.

Kpoo told Zigbuo that said since 2010, she and her three great-grandchildren have been surviving off the generosity of their neighbors and a modest market of producing and selling palm kernel oil.

“Restricted movement throughout the country, because of the Ebola epidemic, forced the closure of schools, offices and businesses. People aren’t receiving salaries. Communities that routinely provided food and shelter for abandoned, elderly neighbors are strained to continue this,” Zigbuo said.

Kpoo had been praying for food daily. Someone from Henri Dennis School came by her home a couple of weeks ago, assessed her situation and promised food for her family, Zigbuo said.

The distribution was the first to this community, said United Methodist missionary Helen Evans Roberts.

She noted that food distribution was another UMCOR intervention in Liberia which will affect several communities across the area including communities in Monsterrado, Margibi, and Bomi Counties.

“UMCOR intends to touch lives in all of the communities that were ravished by the Ebola virus,” Roberts said.

“We hope this initiative will help the people of the Topoe Village Community to take the first step towards food security,” Zigbuo said.

Zigbuo rejoiced and cried with Kpoo and her family.

“After arriving at her humble home, Kpoo raised her hands to God and with a determined face, exclaimed in her native language, ‘So God, you still remember me?’”