Rep. Delia Ramírez Hernández (D-Ill.) was sworn into the 118th U.S. Congress on Jan. 7, becoming its first United Methodist Latino woman. She was elected Nov. 8, 2022, to Illinois’ 3rd District with more than 67% of the vote.

She is also the first Guatemalan-American to achieve such a high office in the political history of the United States, and, at 39, is one of the youngest members of the U.S. House of Representatives.

Ramírez Hernández told CNN that her journey from being a working-class daughter of a migrant to elected office mirrors the journey of “so many people and so many children of immigrants who contribute and do so much for this country.

“I want men and women, young and old, to see me and think, ‘That was my m’hija; that was my daughter.’”

She had been serving as representative to the 4th District in the Illinois State Congress since 2018. That year, she spoke with UM News at the time of her election. 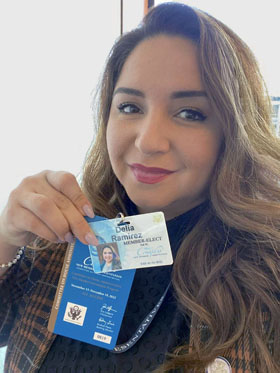 Rep. Delia Ramirez Hernández shows her new credential as a congresswoman before being sworn in on Jan. 7. Ramirez Hernández is one of the youngest in the U.S. Congress and the first Latina to represent Illinois. Photo courtesy of Delia Ramírez.

At Humboldt Park, she found her call and the opportunity to develop the abilities and talents to serve others.

As a political leader, she recognizes that the seeds that the church's teachings planted in her have borne prosperous fruit for the benefit of many poor people and needy families in the city of Chicago. While serving as a state representative, she proposed laws to help the most impoverished parts of her district.

She describes Humboldt Park United Methodist as “a beacon for me, a fortress.”

“In the church, I was formed in my faith and found my call to serve my community,” she said. “There I developed skills as a leader and learned how to lead my life as a Christian.”

Remembering the text of the "Great Commission," Ramírez Hernández points out that this church has fed the poor, provided shelter for homeless, visited people in prison and made people aware of why many of them live in poverty.

At jus11 years old, she had the opportunity to preach for the first time. She had to stand on a drawer to be able to reach the microphone and remembers being able to feel and hear her voice with a force that she had never felt before.

“From that moment, I began to understand that the call I have received from God is to serve God, bringing a prophetic voice to others.”

That first sermon was based on 1 Corinthians 13, whose central theme is love.

“I remember that I preached on the importance of loving God, loving our neighbor, loving ourselves and how that love flows through our actions, in our relationship with God and in how we lead our own lives,” she said.

Both of her parents worked at the church shelter, and 8-year-old Ramírez Hernández would sit and talk with unhoused people who came for meals.

“I sat down to listen to them, to get to know them and to discover the God that we preached in the church, through their experiences, their testimonies and their needs,” she said. “It was through these experiences that I felt the need to do more in favor of so many people who are helpless, abandoned. My awareness and concern grew as to why in this country of abundance, there are so many people in need.” 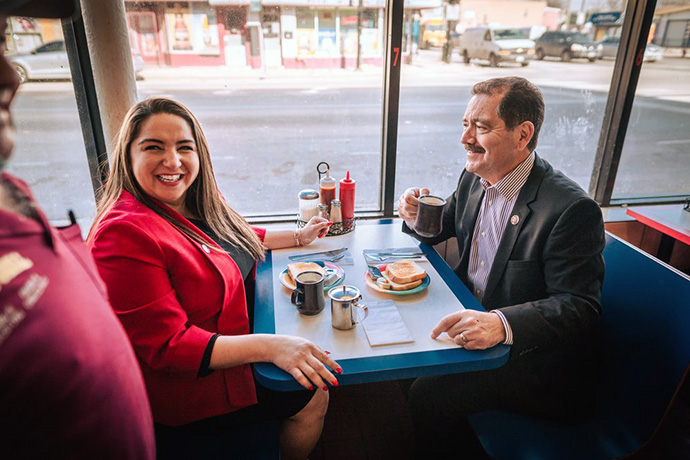 Another pivotal moment in Ramírez Hernández’ upbringing occurred when she was 15. Her church engaged in a legal battle with developers wanting to take over sections of the neighborhood and convert it into luxury condominiums. They wanted to turn the church property into a parking lot.

The developers had the support of the councilperson who represented that district.

“One day I decided not to go to school and asked my mom to take me to court with her, to be with the people of my church and have the opportunity to tell that councilwoman to her face what she was doing was immoral,” she said.

After that experience, she decided to dedicate her life to what the church does when it fulfills the commission it has received from God. At the age of 17, she was hired by the church to work as an organizer for a new community center that was being established. She was in charge of organizing the mail for people who didn't have a home, so they could receive their mail.

Ramírez Hernández was convinced that she had to do more and the church could do more for them, helping them get jobs and reconnecting them with their families. At 18, she was already a social worker managing cases. At 19, she became the program director of that center and at 21 she was named its executive director.

“Those experiences looking (at) the church doing mission in the midst of social realities and the promotion that I received from the people in the church to give me the opportunity to develop myself as a leader, is what has brought me to this point,” she said. “The church trusted me, supported me and gave me the opportunity to develop as a leader, when it seemed like I was in a David vs. Goliath fight.” 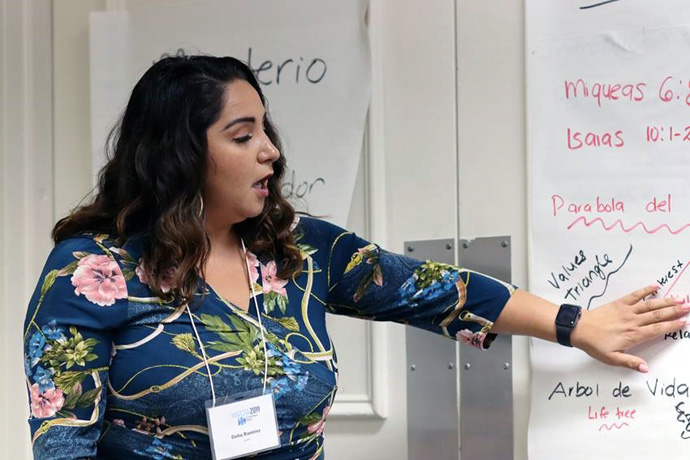 Ramírez Hernández is widely recognized by the United Methodist Hispanic-Latino community and other groups in the church for her work as a leader.

She said that it was as a first-time attendee at a MARCHA meeting when she learned how the Latino community is organized within The United Methodist Church at the national level. MARCHA is the Hispanic-Latino caucus of The United Methodist Church. It is an organization that advocates for the rights of the Hispanic-Latino community within the church and has been a place that supports the Methodist doctrinal principle of "social holiness."

At 27, Ramírez Hernández became a member of the Executive Committee of the National Plan for Hispanic-Latino Ministry. Her presence and participation were the result of the organized work of the youth groups of MARCHA.

“These experiences were a school for me on how to relate, how to find common ground, how to build coalitions that allow the church to be a force that advocates for all those who are in need, based on loving the neighbor and without differences,” she said.

Ramírez Hernández has been part of the MARCHA board of directors for several years and was a youth leader in the organization. She said her political career is another stage of what she has been doing all her life, which is to serve the people. She considers that it is a real way of doing more for people and to generate changes that help to transform the world, as stated in the mission of The United Methodist Church.

“I was born in The United Methodist Church; I love it. And I have criticized the church, because we talk a lot about being Christians, about being a United Methodist, how to be a church serving people and how to be a church loving each other and not attacking each other,” she said. “Instead of focusing on talking about God's love, we should focus on living that love and sharing it with our actions.”

A message she wants to give to the church is “that we stop talking about the church; let's focus rather on being a church.”

“Let's be a church supporting people when they are victims of injustice,” she said. “Let's demand that political representatives fulfill their responsibilities. Let's participate in our communities helping them to organize. Let's make people recognize our presence by testimony and not just by inviting them to a Sunday service or a Bible study.”

Vasquez is the Hispanic/Latino Director of United Methodist News. Contact him at (615) 742-5155 or [email protected].