The wildfire crisis ravaging California for weeks took a dramatic turn and spread into the Pacific Northwest, feeding off dry conditions and strong winds.

Following a hurricane or tornado, the natural response for church disaster relief teams and volunteers is to spring into action immediately, descending on the affected area with whatever is needed — chainsaws, generators, bottled water and food.

Such a response isn’t possible in a wildfire. Many are expected to burn for several more weeks before containment. Once the fires are extinguished, the Environmental Protection Agency must inspect the area for toxins before declaring it safe for homeowners or work crews, since many older homes could have lead paint or asbestos.

“That’s the big difference between fire and tornados or hurricanes: You can’t move in immediately,” said Judy Lewis, disaster relief coordinator for the California-Pacific Conference. “For a fire that’s going today, we may be able to get into those neighborhoods by November.”

Her conference is working with National Voluntary Organizations Active in Disaster, a nonprofit association of disaster relief organizations, to help survivors of the CZU Lightning Complex fire in the Santa Cruz and San Mateo area. That fire, started in August by lightning strikes, burned more than 80,000 acres, destroyed more than 1,400 buildings and led to one death. 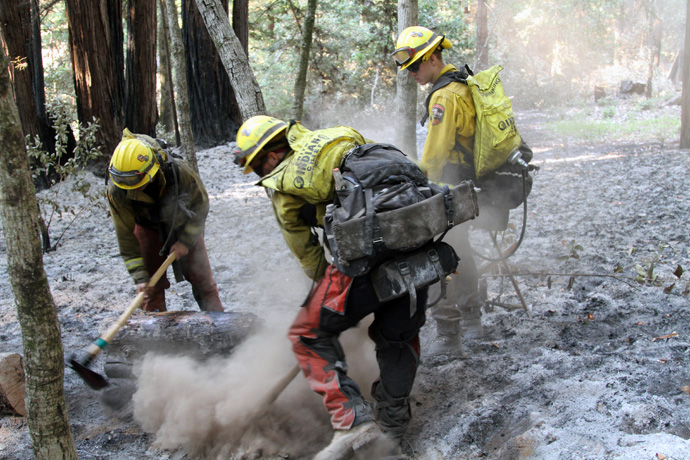 U.S. Army soldiers from the California Army National Guard’s Task Force Rattlesnake out of Redding, Calif., put out a fire Sept. 1, near Scott’s Valley during the CZU Lightning Complex Fire in Santa Cruz and San Mateo counties. Photo by Staff Sgt. Eddie Siguenza, U.S. Army National Guard.
Edd-Bennett said the most urgent need is cash donations and wildfire buckets, a variation of the cleaning buckets promoted by the United Methodist Committee on Relief.

“We’ve got 500 buckets coming and I’m hoping for 500 more,” she said. “People who are able to go back to their homes will need one as they return.”

On top of helping to clean, UMCOR-trained Early Response Teams serve as a caring presence when survivors go home, especially if their house has been lost.

To donate directly to a conference disaster relief fund:

Pacific Northwest Conference
“We’re beside them as support as they retrieve any valuables that may have survived,” Edd-Bennett said. “It’s important for most people to go back, though I’ve worked with some who were so traumatized that they never want to go back.”

Boulder Creek United Methodist Church is located in the area affected by the CZU fire, and the town of Boulder Creek was forced to evacuate. The Rev. Clyde Vaughn, pastor, reported that several members’ homes will require thorough cleaning from smoke damage before being livable again and one family in the church lost their home entirely.

“It is a young family with two children. The tragedy is magnified because they do not have renter’s insurance, so our members are doing what they can to help them recover,” he said.

The church had already been worshipping online due to COVID-19, so now members tune in from wherever they are now staying — some as far away as Colorado.

At its first service after the evacuation, lay speaker Ted Bond preached on the psalms, which he said are often songs of lament where faithful people cry out in distress. He said it’s understandable to be sad, scared, even mad at God after such a tragedy.

“It’s OK to have these feelings, but I also encourage you to look for the surprise blessings. Has God been present to you in this time of distress?” he asked. 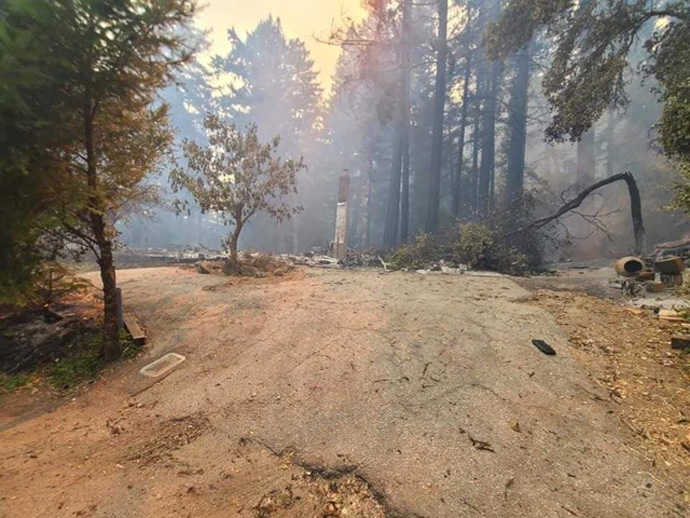 Part of a chimney (center) is all that remains of the home of a church family from Boulder Creek United Methodist Church in Boulder Creek, Calif. The family, a young couple with two children, are safe, sheltering in Santa Cruz, Calif., but their possessions are a total loss. Photo courtesy of the Rev. Clyde Vaughn, Boulder Creek United Methodist Church.
The coronavirus is another complication to the church’s standard response to disaster.

“We can’t do much right now because of COVID-19 and the state mandates we’re currently under,” said Lewis. “Normally we’d have coordinated groups come in to help distribute necessities, but people can’t come pick them up due to the lockdown.”

Lewis also described the difficulty in housing evacuees. Area convention centers that typically serve as shelters have to operate at limited capacity, which also limits the support her teams can provide.

“Normally we’d work with the kids, bring things to keep them occupied, encourage them to keep up their schoolwork,” she said. “They see Mommy and Daddy crying, and they don’t know what to do. We try to give a positive experience in a negative situation and I feel bad we can’t do anything.”

Edd-Bennett said that even as the fire recovery effort is beginning, she’s also encouraging residents to prep their land for potential landslides. The area normally gets a lot of rain and now that the fires have removed the vegetation, landslides are likely, which she considers “disasters upon disasters.”

Greater Northwest Area Bishop Elaine JW Stanovsky shared Edd-Bennett’s concern for what may lurk around the corner in what has already been a year filled with tension and trauma.

In a letter to her episcopal area, she wrote, “We call out to God, seeking mercy. Seeking relief. Seeking just one day when we do not feel danger near at hand and it doesn’t feel like the weight of the world is on each of our shoulders.”

Though the recovery will be long and difficult, Lewis said bringing hope in a seemingly hopeless situation is exactly what the church is called to do.

“People need to see the face of the church; we want to bring hope … even if it’s just giving them a gas card or food,” she said.

Butler is a multimedia producer/editor for UM News. Contact him at (615) 742-5470 or [email protected]. Kathy L. Gilbert, news writer for UM News, contributed to this report. To read more United Methodist news, subscribe to the free Daily or Weekly Digests.

Funds from the United Methodist Committee on Relief’s International Disaster Response program helped purchase food and other supplies for people in Beni who have fled attacks in outlying areas.
Bishops

The Rev. Carlo A. Rapanut, assistant to the bishop in the Greater Northwest Episcopal Area, is the first Filipino American bishop in The United Methodist Church, and the first U.S. bishop who was ordained in a central conference.
Evangelism