In observance of All Saints’ Day in the Philippines, United Methodists hosted an ecumenical prayer gathering to call for justice for victims of drug-related killings.

At St. Paul United Methodist Church in the Tondo district in Manila, the Rise Up for Life and for Rights coalition joined families Oct. 30 to remember loved ones killed by the war on drugs.

United Methodists are among the leaders of the Rise Up alliance of human rights lawyers, civic organizations, survivors and families of victims who are speaking out against drug-related extrajudicial killings in the Philippines.

Norma P. Dollaga, a United Methodist deaconess, one of the conveners for Rise Up for Life and for Rights said, “The act of remembering is our call for justice. We offered flowers as a symbol of our hope and we lit candles so truth and justice will prevail.”

Mothers and advocates shared testimonies through stories, poems and performances.

The Rev. Rannie Jacinto, pastor of St. Paul United Methodist Church, welcomed families and advocates of human rights. He promised that the church is open to anyone who would seek love and justice from God.

The Rev. Nonie Aviso, from the United Church of Christ in the Philippines, shared the homily. 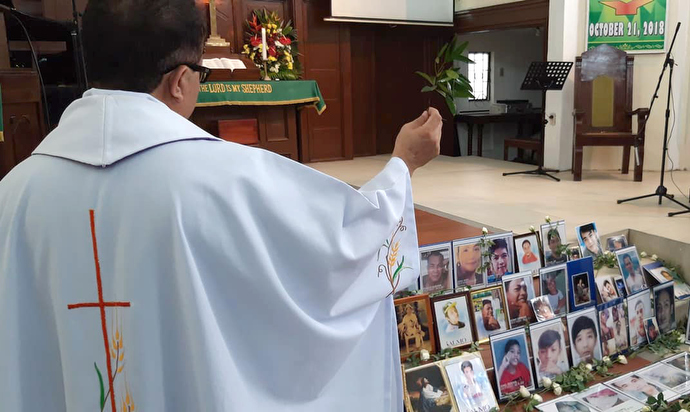 The Rev. Nonie Aviso of the United Church of Christ in the Philippines blesses photos of the victims of drug-related violence during a service at St. Paul United Methodist Church in Manila. Photo courtesy of Juliet Solis.

“Killing is never the will of God and we should keep on believing that justice will prevail,” Aviso said.

In a prepared statement, the families of the victims said, “We collectively remember our loved ones who have been killed. We are only the few among the more than 20,000 victims in the name of the war on drugs.

“While the thousands of families are grieving, drug lords have kept on importing, distributing and selling illegal drugs,” the statement read.

“Each candle lit would illumine and would create a flint which would arrest the darkness brought by the killers and the tyrants.”

Last week, Philippines President Rodrigo Duterte said the Philippines could expect about 20,000 or 30,000 more deaths related to his war on drugs.

Dollaga said that Rise Up for Life and for Rights coalition requested St. Paul United Methodist Church because of its location.

"Tondo has become a symbol of poverty and neglect where there are many cases of drug-related killings," she said.

It is the intention of the Rise Up for Life and for Rights, she said, to reach out to the poor and inform them that they belong to God’s heart. She added that the church must never neglect the desire of the poor for mercy and justice.

The Rev. Carleen Nomorosa, HIV Program Coordinator for the National Council of Churches in the Philippines, was among the United Methodists who joined the ecumenical gathering.

“As a United Methodist clergy, I have no idea how to pray for the families of victims. I feel like throwing up each time I hear their stories. I feel ashamed for seeing them more vigilant in their faith,” she said.

“I was among those who were asked to give utterance of a blessing or the benediction to the photos of the victims. It is not in our United Methodist tradition to bless the photos, neither to pray for the dead … but I did."

Nomorosa said that while she was giving her blessing to the photos, she could hear the loud cries of the families.

She prayed and asked God, “May the blood of the victims disturb us, may the brutal killings carve in our hearts and minds, may it linger in our ears, the cries and sobs of mothers who lost their sons, agonies of families from inhumane treatment, so we won't cease to cry out, ‘Stop the killings, we want justice!’”


Mangiduyos is a United Methodist News Service correspondent based in the Philippines.

Attendees to the Charisma Revival conference pledged to aim for a ministry centered on cooperation and connectionalism, even amid such a divisive time for The United Methodist Church.
Faith Sharing

The Week of Prayer for Christian Unity is an annual observance held January 18-25 in which all Christians everywhere are encouraged to pray for unity in love and mission.
Global Health