United Methodists are among the leaders of an alliance of human rights lawyers, civic organizations, survivors and families of victims who are speaking out against drug-related extrajudicial killings in the Philippines.

More than 7,000 people have died since Filipino President Rodrigo Duterte launched his "war" on the drug trade in July, according to the BBC.

The group Rise Up for Life and for Rights and the National Union of People’s Lawyers-National Capital Region held a press conference at the National Council of Churches in the Philippines and on March 10 signed a memorandum of agreement to oppose the killings.

United Methodist deaconess Norma P. Dollaga, one of the conveners of Rise Up for Life and Rights, said the alliance is documenting cases of killings and human rights violations.

She said poverty and the loneliness of internal migration in the country is the breeding ground for “a profitable market of illegal drugs.”

"It is the whole system of rottenness. The state could not deliver the best services to the people — the social justice, the social services. Poverty grips the jobless, the internal migrants, the poor,” she said. 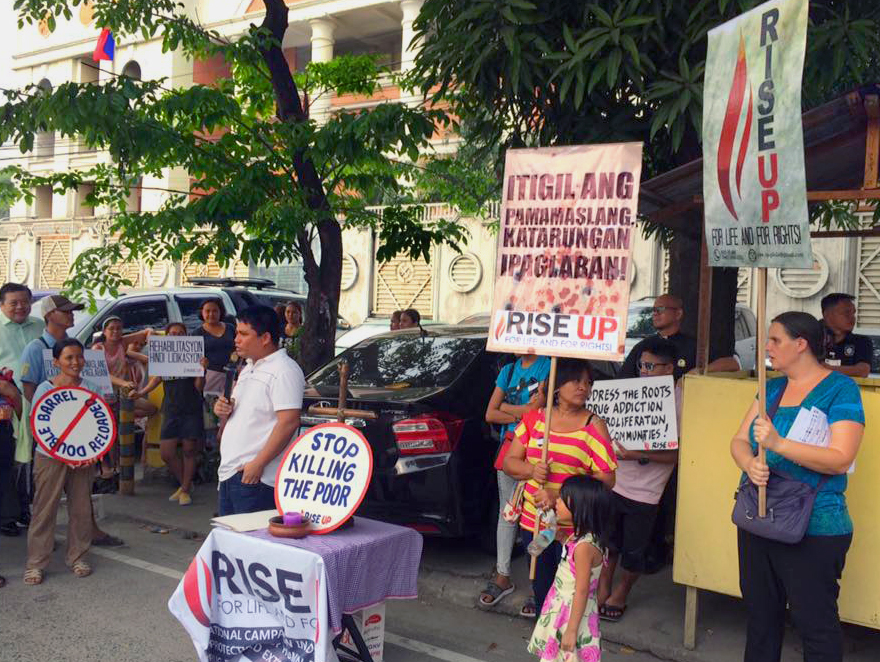 The Rise Up for Life and for Rights movement held a protest outside the Office of the Ombudsman in Manilla, Philippines. United Methodists are among the leaders of the alliance of human rights lawyers, civic organizations and victims of the extrajudicial killings to rise up for justice. Photo courtesy of Rise Up for Rights and For Life.

Rise Up for Life and for Rights is a network in defense of life and protection of human rights against drug-related extrajudicial killings and other human rights violations. The network unites efforts from various religious denominations and community organizations to oppose the killings and seek justice. The groups also plan programs to support the victims’ families and help rehabilitate drug addicts.

The National Union of Peoples’ Lawyers is a nationwide voluntary association of human rights lawyers in the Philippines who are committed to the defense, protection, and promotion of human rights, especially of the poor and the oppressed.

Ephraim Cortez, a United Methodist lawyer, is the secretary-general of the lawyers’ group that is part of the coalition.

"We can hold the perpetrators accountable, because this is murder, we have 20 years to do it."

The Rev. Gilbert Billena, spokesperson for Rise Up, said the police have failed.

“Not only did they fail to eradicate the drug menace, but they created another layer of suffering, terror, erosion of trust, and outright proliferation of another crime, especially in poor communities," he said.

He praised the lawyers who have stepped forward to help families affected by drug-related killings.

"With affected families supported by human rights advocates and people’s lawyers, we will search for justice,” he said.

Rubilyn Litao, also a United Methodist deaconess, said that until the state resolves the basic problems of the people, it will always have wrong solutions. Litao helped organize the press conference.

"Killing the poor is the easiest way out so it would appear that it is solving the problem," she said.

“Not only are we suspect of any assertion that the Philippine National Police is actually capable of extricating themselves from the influence of the drug-connected, corruption-riddled officers in their ranks, but, more importantly, we condemn any resurgence or continuation of unabashedly wanton killings in poor communities,” he said.

Marigza added that cases will be filed against identified alleged assailants in drug-related killings.

“We will be arm-in-arm as affected families, lawyers and advocates together," Marigza said.

Marigza also said the country must “embrace a path to redemption, where the lives of the poor are held as sacred. Our collective efforts to alleviate poverty and provide opportunities for ‘productive participation’ in local economies will go much farther than hell-bent executions of small-time drug users and peddlers.”

Recently Rise Up held a protest action outside the Office of the Ombudsman, as a woman filed a complaint against policemen who killed her son and their informant.

Dollaga, who currently serves as on the United Methodist Board of Global Ministries National in Mission for Justice and Peace, has been involved in organizing churches that are secretly sheltering victims of violence.

"We rise and hope for every life that was sacrificed in the name of terror against people," Dollaga said. "Resistance is a gift. Redemption and liberation is what we need.  Justice will shepherd us through."