A Filipino United Methodist deaconess has long fought for justice in the Philippines — most recently by helping to find safe harbors for those targeted in the extrajudicial killings.

Norma P. Dollaga is a co-founder of Rise Up for Life and for Rights, an ecumenical alliance campaigning against extrajudicial killings that have targeted mostly drug users or smalltime pushers. About 7,000 people have been killed.

"Resistance is a gift,” she says of her tireless quest to sensitize people and alleviate humanity from suffering. “Redemption and liberation is what we need. Justice will shepherd us through."

Dollaga, a member of the Philippines Central Conference, and the alliance assist church-related institutions, movements, networks and organizations that partner with the urban poor, workers, youth, lawyers, human rights groups, child rights advocates and women’s groups. Rise Up frames its work as a “from victim to advocate” approach, she said. 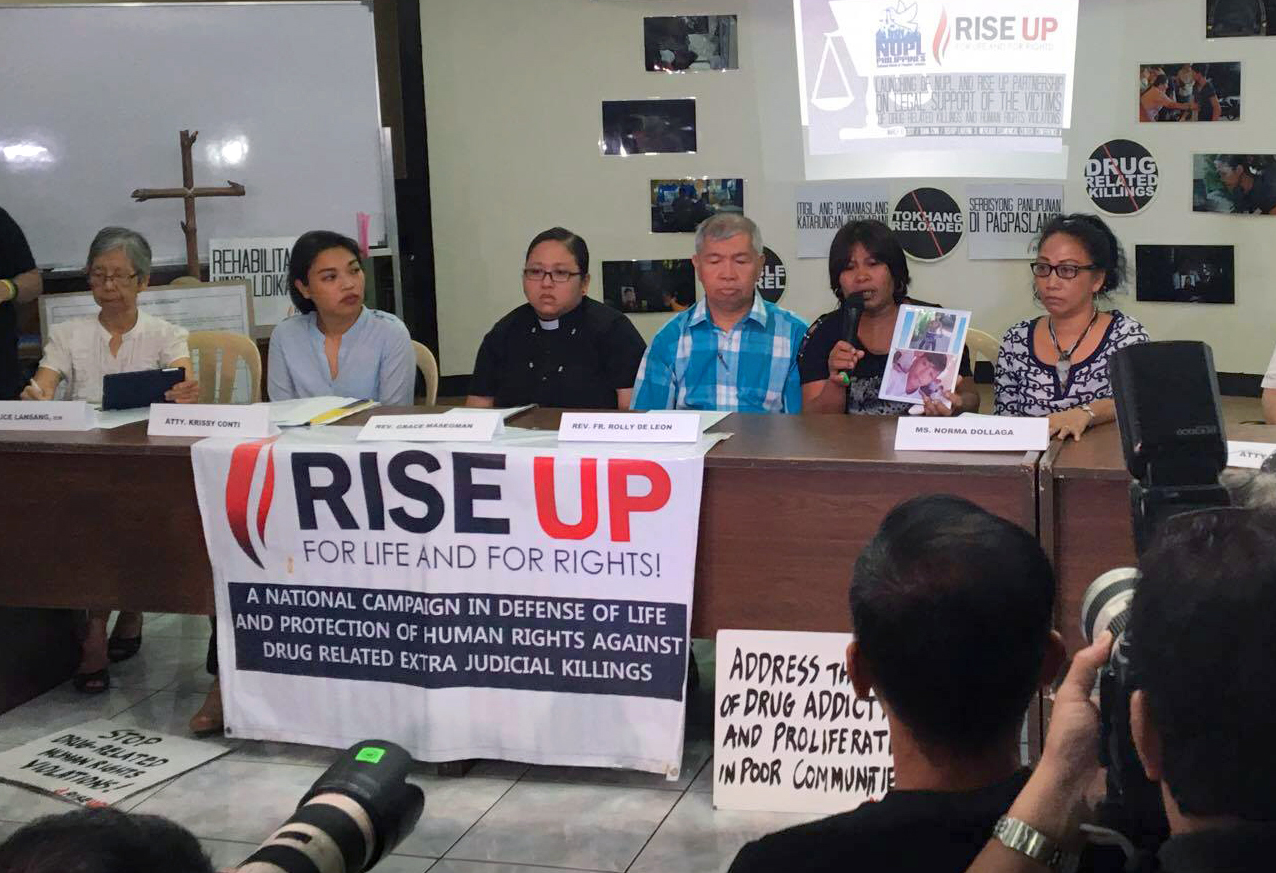 In a file photo, Norma Dollaga, right in black and white top, participates in a press conference held at the National Council of Churches in the Philippines, March 2016. Rise Up for Life and for Rights, a group dedicated to the protection of human rights against drug-related extrajudicial killings and violations in the Philippines, joined forces with the National Union of People’s Lawyers-National Capital Region for the press conference. Photo courtesy of Rise Up for Rights and For Life.

The Rise-Up network has programs on wellness, psycho-social-spiritual processes and emergency employment and is starting to focus on livelihood support. Churches collaborate on public statements and offer resources such as meeting space. “The church could do more by opening its doors for compassion and services and its public witness advocacies.” Dollaga said.

“We would like to send the message across: ‘Stop the killings! Social justice now!’”

Davao Area Bishop Rodolfo A. Juan, who most recently was Dollaga’s bishop in Manila, described her as a “strong-willed woman worker.”

“She is so passionate in her involvement in many social ministries of the church. A fearless lady, sister Norma engages in various activities, even in the streets promoting justice," Juan said.

She also has spoken out on behalf of the Lumads, an indigenous people in the Philippines who have been persecuted.

“In the past years, in the name of the government counter-insurgency program, leaders and community members were killed. Many of them are facing trumped-up charges and harassed,” Dollaga said of the Lumads.

She has co-led the efforts of Kasimbayan — an ecumenical center for development where she serves as top executive — to raise money for a school for the Lumads. The campaign is raising funds overseas and many people are sending assistance for this project.

Dollaga said that the project is named “Help Build a School for Talaingod-Manobo children in Talaingod, Davao del Norte,” in partnership with Save our Schools Network.

“Each year, Save our Schools Network seeks to build another school building to accommodate new students in various communities of Mindanao,” she said. “These efforts are intended to continue until all Lumad community schools have ample classrooms for all of their learners.”

She has published scholarly articles and poetry about pursuing peace and justice, including a Lenten reflection about how the Aetas, the indigenous peoples, are teaching people about life, suffering, death and resurrection.

"She is not only a master of word craft — she truly writes from the heart of a deaconess truly inspired and called by God. Her commitment to social justice is a journey of lifetime consistency," he said.

A Christian education director for three decades, Dollaga also serves on the faculty at Harris Memorial College, a school for United Methodist deaconesses. She has organized courses and seminars that deal with violence against women.

The deaconess has served on a number of international and national fact-finding missions, particularly on issues of human rights, relief work and electoral observations.

Among the most compelling was the mission with the Lumads in Mindanao, which included the distribution of relief and medical supplies after typhoon Pablo.

In 2013, a woman who exposed the food blockade and militarization of relief operations conducted by 67th Infantry Battalion of the Philippine Army was killed, Dollaga said.

“It was a powerful mission because while people were marginalized, and subjected to militarization, they have the will to rise up and get their power through collective action,” she  added. “They are indigenous people and farmers who, for the longest time, have been victims of  neglect and marginalization, yet are not without hope as they struggle to assert their rights.

“This has taught me again and again that as a church, we can draw a lot of wisdom from the very faithful people,” Dollaga pointed out. “They are shepherding us to where our mission must be, and lead us to where our hearts should be.”

Manila Area Bishop Ciriaco Q. Francisco noted Dollaga’s complete dedication to her ministry with poor and indigenous people, “I salute her heroic work for the Lord,” he said.